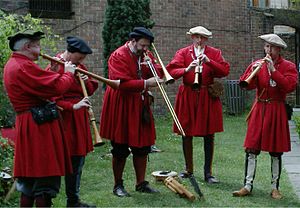 A band of modern-day Waits

Waits or Waites were British town pipers. From medieval times up to the beginning of the 19th century, every British town and city of any note had a band of Waites. Their duties varied from time to time and place to place, but included playing their instruments through the town at night, waking the townsfolk on dark winter mornings by playing under their windows, welcoming Royal visitors by playing at the town gates, and leading the Mayor's procession on civic occasions.

Their instruments also varied, but were for the main part loud and penetrating wind instruments such as the shawm, which was so closely associated with them that it was also known as the Wait-pipe. Waits were provided with salaries, liveries and silver chains of office, bearing the town's arms.

As a result of the Municipal Corporations Act of 1835, Waits were abolished, though their name lingered on as Christmas Waits, who could be any group of singers or musicians who formed a band in order to sing and play carols for money around their town or village at night over the Christmas period. It is these largely amateur musicians who have today become associated with the name 'Waits', rather than the historical civic officers and accomplished musicians who represented the original Waits.

Most European countries had their equivalents of Waits. In Holland they were called Stadspijpers, in Germany Stadtpfeifer and in Italy Pifferi. See alta capella.