Everyone Says I Love You

Everyone Says I Love You

Infobox_Film
name = Everyone Says I Love You 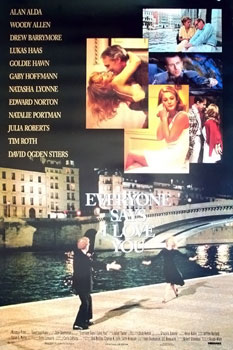 The film was nominated for Best Motion Picture - Comedy/Musical at the .

*All the performers sing in their own voices, with two exceptions: , who was told by Allen to intentionally sing worse because she sang too well to be believable as a normal person just breaking into song, and , who convinced Woody Allen that her singing was too awful even for the "realistic singing voice" concept he was going for. Her voice was dubbed by Allen-regular .

*The title song was written by and , and was used as a recurring theme song in the movie "" (1932). was highly regarded by Allen. Marx's theme song from "Animal Crackers" (1930) "Hooray for Captain Spaulding" is featured, sung in French by a chorus of Groucho Marxes.

*"Shall We Dance" by George Gershwin is a somewhat recurring song on the film, appearing more than once with different arrangements.