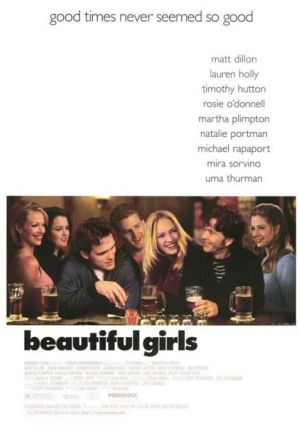 A player (played by Timothy Hutton), at a crossroads in his life, returns to his hometown for a reunion, where he finds that his classmates are not very successful in life either, especially not in . His heart, however, is captured by a young girl who is only thirteen but an "old soul" (played by ).

* Willie Conway (played by ) &mdash; The only one of the group to move away. Willie relocated to , working as a semi-successful pianist. Generally the good guy in the group, his home life isn't as strong as he may prefer. His mother is deceased and his father is emotionally withdrawn. He also has a wild younger brother, Bobby (), who is very grounded despite his age.
* Tommy 'Birdman' Rowland (played by ) &mdash; Head snow plower. Known as the tough one of his group. Tommy seems to have not let go of his youth, and is still having an affair with Darian Smalls, an old high school flame. This puts a considerable strain on his relationship with his current girlfriend.
* Michael 'Mo' Morris (played by ) &mdash; A factory manager by profession. Unlike his friends, humble Mo has happily settled down with a family, but still does have a temper when provoked. Admires Willie greatly for how far he's traveled in his life.
* Kev (played by ) &mdash; Snow plower and Tommy's co-worker. The wisecracking Kev has to reluctantly look the other way when Darian enters the picture, well aware of Tommy's relationship with Sharon which he doesn't approve of.
* Paul Kirkwood (played by ) &mdash; Snow plower who is obsessed with centerfold models. Paul can't let go of his old relationship with a waitress (). A crass guy who can't resist tormenting his ex-girlfriend by plowing snow into her garage door.
* Stanley 'Stinky' Womack (played by ) &mdash; The hardworking and humble proprietor/bartender of a local bar that he recently purchased and renovated. A generally good guy who knows the limits of right and wrong.

Screenwriter was living in Boston, waiting to see if would use his script for "". He said in an interview, "It was the worst winter ever in this small hometown. Snow plows were coming by, and I was just tired of writing these movies with people getting shot and killed. So I said, 'There is more action going on in my hometown with my friends dealing with the fact that they can't deal with turning 30 or with commitment' - all that became "Beautiful Girls".

Ted Demme had the entire cast come to and live together for two to three weeks so that they could bond. He also made sure that the setting is a character unto itself. He "wanted to make it look like it's Anytown USA, primarily East Coast. And I also wanted it to feel like a real working class town".

Scott Rosenberg also writes for the show "October Road". The show is loosely based on what happened after "Beautiful Girls" came out and how his friends reacted to a movie about their lives. Both "Beautiful Girls" and "October Road" take place in the fictional town of Knights Ridge, and have similar characters, jobs, plot lines.

"Beautiful Girls" was released on , in 752 theaters, grossing $2.7 million on its opening weekend. It went to make $10.5 million in North America.

The film received fairly positive reviews and currently has a 79% rating on . , of the "", wrote, "What's nicest about the film is the way it treasures the good feelings people can have for one another".