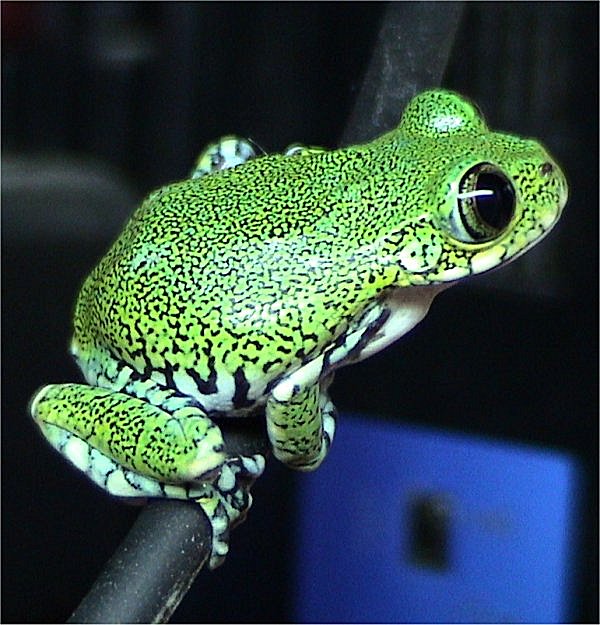 The Big-eyed Tree Frog ("Leptopelis vermiculatus") is a of found in areas in the n country of . In some literature it is referred to as the Amani Forest Tree Frog.

This species is a medium to large frog ranging from 40-85 mm in length. It has two very different colour phases. In one phase they are a bright with scattered specks all over the dorsal surface and the sides are marble with black and . With some specimens the end of the to the toes, forearms and upper lip have white blotching outlined with dark green or black. In the other phase they are with an irregular shaped, darker brown triangular patch on the dorsum. Randomly placed darker or lighter brown spots and patches may appear over the dorsal surface, legs and forearms and a dark brown streak often runs from behind the tympanum ending halfway between the and . In both phases the ventral surface is cream-white. Some specimens show a transition between both phases and change from the green phase to the brown phase as they mature. The s are very big compared with body size and are golden with brown lines and flecks. It has large toe pads that are used for climbing. The tympanum is distinct.

This species inhabits the closed-canopy wet tropical s of Tanzania between the altitudes of 900 and 1800 m. Males call while in the water, and are very territorial. They have two different calls: one is a “ga…ga…ga”, used for attracting females, and the other is a “rrrrrrrr-ga” used for deterring other males of the same species. They are insectivorous.

* Database entry includes a range map, a brief justification of why this species is vulnerable, and the criteria used