Chkalov was born in the town of Vasilyevo, near Nizhni Novgorod, the son of a boiler maker. His mother died when he was six years old. Chkalov studied in the technical school in Cherepovets but later returned to work as an apprentice with his father and as a stoker on river boats. He saw his first plane in 1919 and decided to join the Red Army's air force. He trained as a pilot and graduated in 1924 joining a fighter squadron. Chkalov married Olga Orekova in 1927. In the early 1930s he became a test pilot.

Chkalov developed several new figures of aerobatics. In 1936 and 1937, he participated in several ultra long flights, including a 63-hour flight from Moscow, Soviet Union to Vancouver, Washington, United States via the North Pole on an Tupolev ANT-25 plane (June 18–20, 1937), a non-stop distance of 8,811 kilometres (5,475 mi). The flight pioneered the polar air route from Europe to the American Pacific Coast.

As Part of the Soviet 'Cult' of the Pilot

Fortunately for Chkalov, his professional career as a pilot coincided with a period of Soviet history when aviation’s prominence as a cultural symbol was second only to that of Stalin himself.[1] During this era, the government of the Soviet Union lionized – in fact, almost deified – its pilots. This glorification applied to pilots in general but also tended to concentrate intensely around certain individuals deemed particularly exemplary. Stalin – a man noted for his paranoia towards anything he believed could possibly develop into a rival cult of personality[2] – decided that deliberately elevating pilots to make them popular with the population at large posed no political risk to him or his government. Far from creating powerful, politically motivated people around whom dissatisfied Soviet citizens could gather, the motivation behind exalting the USSR’s pilots was twofold: 1) to raise the population’s morale, and, as a function of that 2) to strengthen the legitimacy and strength of rule of the heads of government.[3]

Aviation, specifically, was poised to positively affect public spirit. Firstly, tsarist Russia had not possessed a significant air force, meaning any successes in aviation could be wholly attributed “to the virtues of Bolshevism.”[4] Furthermore, the successes of Soviet pilots (which the Soviet press publicized widely) offered the populace a feeling of technological superiority over both the world around them and Nature itself.

Stalin felt that exalting individual pilots was not dangerous to his own political interests because although the skill, strength, fortitude, etc., of the pilots were praised, Stalin was held as “ultimately responsible” for their achievements.[5] The public narratives took pains to emphasize the father-son relationship between Stalin and his pilots. For example, Chakalov published an article titled “Our Father” soon after becoming the first person to fly from Moscow to the United States via a polar route. In this article, he explicitly stated that “[h]e[, Stalin,] is our father.”[6] Stalin’s role as a paternal figure (and the implied nature of the pilots as his ‘spiritual sons’) emphasized that ultimate responsibility for the pilots’ feats lay with Stalin. This point was driven home by “accounts [which]…credit Stalin with much of the initiative and planning of [important flights, including, but not limited to] listening carefully to the ideas of Soviet aviators and aviation planners, tracing [the pilots’] routes, determining who [would] fly, and...giving the final permission.”[7] Furthermore, the most prominent Soviet pilots (the ones around whom mini personality cults developed) enjoyed personal success, including compensation and other perks, within the structure of the USSR because of their successes in aviation. They thus had a strong incentive to remain publicly loyal to the regime.[8] Stalin wished to use this system of glorifying pilots as a vehicle for promoting a type of role model to the people of the Soviet Union. The public identities of the USSR’s hero-pilots were to serve as representatives of Stalin’s conception of the New Soviet Man – someone beyond the petty machinations of politics[9] - rather, someone who was a master of nature[10] and an “eternally youthful…individual hero.”[11]

The role Soviet pilots played in Soviet society was not solely constructive – they also served to distract. Some of the most high-profile flights Soviet pilots undertook coincided with the purges. Praise for both the victorious pilots – and, thus, Stalin – hit a fever pitch at just the moment the multitudes unfortunate enough to fall victim to the purges needed both the sympathy of the public and a thorough, unbiased examination of that which they had been accused.[12] Distraction turned to a full assault for those more well-known victims of the purges who could not be simply swept under the carpet. Such unfortunates were instead subjected to unfavorable comparison with the pilots.[13]

Again, fortunately for Chkalov, he had the honor of being “the Soviet Union’s most famous pilot.”[14] Chkalov’s life story (as the government chose to represent it) reflects the traits of Stalin’s New Soviet Man – apolitical,[15] forever young (he died in an accident at the age of thirty-four), a master of nature, and as concerned with the greater good (the integrity of his experimental aircraft) as he was with his own life.[16] Interestingly, the government chose to highlight Chaklov’s personal initiative (that is, his youthful disdain for authority) – a peculiar sort of dualism in a society where the collective good was (supposed to be) prized over individual initiative. As John McCannon writes, “Chkalov was a brilliant instinctual flier, preferring to rely on hunches and reflex rather than standard methodology or flying instruments. He was also a daredevil who disdained authority.”[17] The intended focus was not on youthful disobedience (for which, in canon, he was punished and apologized for[18]), but on his use of his instincts. Chkalov, as a superman, could intuit towards the end of efficiency, something prized in the New Soviet Man. However, this intuitive strain was incomplete without a sense of “maturity and self-discipline.”[19] One story in the public canon recounts how Chkalov tells a little boy he sees fighting a small girl to stop fighting and to focus his energy on his studies. The boy takes the advice to heart and is successful because of it.[20] The point of the story is to show that though Chkalov was a firebrand as a youth, “in becoming a hero, [he] had gained not only wisdom but the capacity to transmit that wisdom to others.”[21] This unification of bravery and maturity was the model which Stalin wished to transmit as the ideal – his conception of the New Soviet Man. 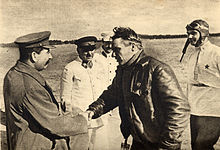 Chkalov was killed on 15 December 1938 while piloting a prototype of the Polikarpov I-180 fighter, which crashed during a test flight. The series of events leading up to the crash is not entirely clear. Neither Polikarpov nor Tomashevich approved the flight, and no one had signed a form releasing the prototype from the factory. In any event, Chkalov took off and made a low altitude circuit around the airfield. For the second circuit, Chkalov flew farther away, climbing to over 2,000 m (6,560 ft) even though the flight plan specifically forbade exceeding 600 m (1,970 ft). Chkalov apparently miscalculated his landing approach and came in short of the airfield, but when he attempted to correct his approach the engine cut out. Chkalov was able to avoid several buildings, but struck an overhead powerline. Chkalov was ejected from the cockpit, sustaining severe injuries and died two hours later.

The official government investigation concluded that the engine cut out because it became too cold in the absence of the cowl flaps. Others hypothesised that Chkalov had advanced the throttle too fast and thus flooded the engine. As a result of the crash, Tomashevich and several other officials, including Arms Industry Department director S. Belyakin, who urged the first flight, were immediately arrested. Years later, fellow test pilot Mikhail Gromov blamed the designers for flawed engine cooling and Chkalov himself for deviating from the flight plan. Chkalov's son claimed that a plan to assassinate his father had been in the works in the months preceding his death, but the circumstances of the crash make foul play unlikely. Regardless, with Chkalov's death Polikarpov's reputation with Stalin suffered a blow from which he would never recover. 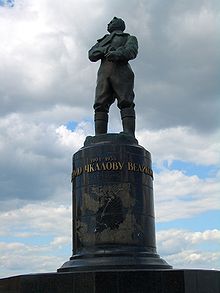 Chkalov monument in Nizhny Novgorod. The map on the pedestal shows the route of the Moscow to Vancouver flight.

The village of Vasilyevo where Chkalov was born is now the town of Chkalovsk (Nizhny Novgorod Oblast). The city of Orenburg bore the name Chkalov from 1938 to 1957. There used to be a Chkalov Street in Moscow (part of Moscow's Garden Ring), now renamed Zemlyanoy Val, there still exist its namesakes in Nizhny Novgorod and several other Russian cities. A street in Vancouver, Washington has borne the name Chkalov Drive since the 1970s (Google map).

A Chapayev class cruiser was named Chkalov but was renamed Komsomolets in 1958.

The metro rail systems of Moscow, Saint Petersburg and Nizhny Novgorod each have a Chkalovskaya station. Yekaterinburg Metro is expected to have one by 2010 as well. 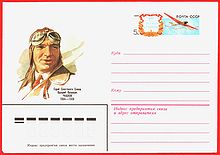