Frequency mixer
This article is about non-linear mixing operating in the frequency domain. For other types of mixers, see electronic mixer. 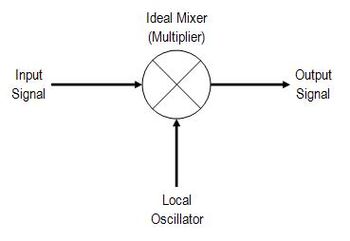 Mixers are widely used to shift signals from one frequency range to another, a process known as heterodyning, for convenience in transmission or further signal processing. For example, a key component of a superheterodyne receiver is a mixer used to move received signals to a common intermediate frequency. Frequency mixers are also used to modulate a carrier frequency in radio transmitters.

Passive mixers use one or more diodes and rely on the non-linear relation between voltage and current to provide the multiplying element. In a passive mixer, the desired output signal is always of lower power than the input signals. Active mixers can increase the strength of the product signal. Active mixers improve isolation between the ports, but may have higher noise and more power consumption; an active mixer can be less tolerant of overload.

Mixers may be built of discrete components, may be part of integrated circuits, or can be delivered as hybrid modules.

Schematic diagram of a double-balanced passive diode mixer. There is no output unless both f1 and f2 inputs are present.

Selection of a mixer type is a trade off for a particular application. Mixer circuits are characterized by conversion gain, and noise figure.[1] Balanced and double-balanced designs allow less of the input signals to feed through to the output.

Nonlinear electronic components that are used as mixers include diodes, transistors biased near cutoff, and at lower frequencies, analog multipliers. Ferromagnetic-core inductors driven into saturation have also been used. In nonlinear optics, crystals with nonlinear characteristics are used to mix two frequencies of laser light to create optical heterodynes.

A diode can be used to create a simple unbalanced mixer. This type of mixer produces the original frequencies as well as their sum and their difference. The importance of the diode is that it is non-linear (or non-Ohmic), which means its response (current) is not proportional to its input (voltage). The diode therefore does not reproduce the frequencies of its driving voltage in the current through it, which allows the desired frequency manipulation. Certain other non-linear devices such as tunnel diodes or Gunn diodes can be utilized similarly.

where what is important is that V appears in e's exponent. The exponential can be expanded as

and can be approximated for small x (that is, small voltages) by the first few terms of that series:

Suppose that the sum of the two input signals v1 + v2 is applied to a diode, and that an output voltage is generated that is proportional to the current through the diode (perhaps by providing the voltage that is present across a resistor in series with the diode). Then, disregarding the constants in the diode equation, the output voltage will have the form

The first term on the right is the original two signals, as expected, followed by the square of the sum, which can be rewritten as

, where the multiplied signal is obvious. The ellipsis represents all the higher powers of the sum which we assume to be negligible for small signals.

Another form of mixer operates by switching, with the smaller input signal being passed inverted or uninverted according to the phase of the local oscillator (LO). This would be typical of the normal operating mode of a packaged double balanced mixer module such as an SBL-1, with the local oscillator drive considerably higher than the signal amplitude.

The mixer circuit can be used not only to shift the frequency of an input signal as in a receiver, but also as a product detector, modulator, phase detector or frequency multiplier.[2] For example a communications receiver might contain two mixer stages for conversion of the input signal to an intermediate frequency, and another mixer employed as a detector for demodulation of the signal.