Craig D. Jessop[1] is an American academic, musician and singer best known for his tenure as the music director of the Mormon Tabernacle Choir from 1999 to 2008.

A native of Millville, Utah, Jessop has been a lifelong member of The Church of Jesus Christ of Latter-day Saints. He was a student of Robert Shaw and received his B.A. from Utah State University, M.A. from Brigham Young University and D.M.A. from Stanford University.

He has been the director of the National High School Choir Festival since its founding in 2005. The event, held at New York's Carnegie Hall, auditions schools from around the country to inspire and enable young singers in learning great works of music and performing with renowned musicians from around the world.

He has also spent seven years as a baritone with the Robert Shaw Festival Singers and performed in the choirs of Helmuth Rilling and John Rutter. Jessop earned a doctorate of musical arts in conducting and performance practice from Stanford University (1980), with an earlier master’s degree in music education from Brigham Young University. He completed a bachelor’s degree in music education at USU in 1973.   Prior to his association with the Mormon Tabernacle Choir, Jessop had a distinguished career as a Lieutenant Colonel from the United States Air Force, where he was director of the Singing Sergeants (1979-1987), commander/conductor, Band of the United States Air Forces in Europe (1987-91) and commander/conductor of the Air Combat Command Heartland of American Band (1991-95).   He began his career in education as director of choral activities at Granite High School in Salt Lake City. 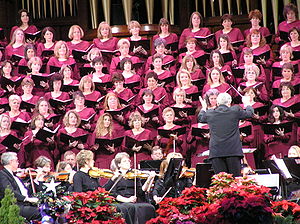 The Mormon Tabernacle Choir and Orchestra at Temple Square performing on December 3, 2005, in the Conference Center under Jessop's direction

Jessop was named Associate Director of the Mormon Tabernacle Choir in 1995 and became Music Director in 1999. Under Jessop's direction the Utah choir won many awards, including the Special Recognition Award from the International Radio and Television Society Foundation and a National Medal of Arts presented by George W. Bush. He served in that position until suddenly resigning on March 4, 2008. At an evening rehearsal he appeared long enough to read a statement, to the surprise and confusion of choir members and community members.[2] Jessop explained he was "at a major crossroads of life" and would return to "the career that I originally began [in] my musical journey" and spend "more time together with our children and grandsons."[3]

Jessop and his wife have four children and five grandchildren.