Mashed potato
This article is about the food. For other uses, see Mashed potato (disambiguation). 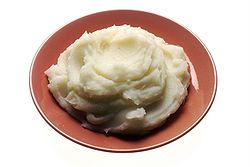 Mashed potatoes on a plate. 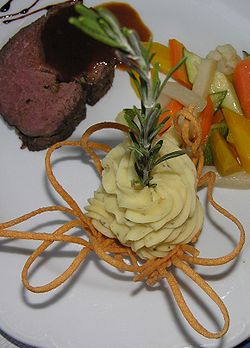 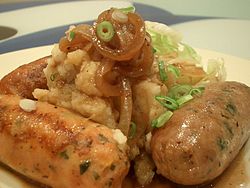 A plate of sausage and mashed potatoes, with cabbage and onion gravy, commonly known as 'bangers and mash'

Mashed potato is made by mashing freshly boiled potatoes with a ricer, fork, potato masher, or food mill. Dehydrated and frozen mashed potatoes are available in many places.

The use of "floury" types of potato is usually recommended, although "waxy" potatoes are sometimes used for a different texture. Butter, vegetable oil, milk or cream are usually added to improve flavor and texture, and the potatoes are seasoned with salt and pepper, and any other desired herbs and spices.[1] Popular ingredients and seasonings include: garlic, cheese, bacon bits, sour cream, crisp onion or spring onion, mustard, spices such as nutmeg, chopped herbs such as parsley or rosemary, white turnip, and wasabi. A French variation adds egg yolk for pommes duchesse; piped through a pastry tube into wavy ribbons and rosettes, brushed with butter and lightly browned. In low-calorie or non-dairy variations, milk, cream, and butter may be replaced by soup stock or broth. Aloo Bharta, an Indian sub-continent variation, uses chopped onions, mustard (oil, paste or seeds), chili pepper, coriander leaves and other spices.

Both heat and kinetic energy can burst the walls of the starch grains in the potato, releasing amylose, which traps water, imparting an undesired "gluey" consistency in the same way that starch adds thickness to foods such as gravy and custard. To avoid this, potatoes must not be cooked at a high temperature for too long. Whole or chunked potatoes receive considerably more heat on the outside by the time enough heat penetrates to cook the center, overcooking the outside; thinly slicing the potatoes allows a consistent amount of heat throughout. Heston Blumenthal recommends cooking the sliced potatoes for 40 minutes at a controlled temperature of 70 °C.[2] To avoid the need for temperature control, the sliced potatoes can be boiled until just cooked (10 to 12 minutes), testing constantly. If a food processor or similar is used for mashing, it will mechanically break the starch grains, releasing amylose and giving an unpleasant gluey consistency. Potatoes are best mashed before adding butter, etc., as the butter or liquid lubricates the lumps of potato, making them more difficult to break up.

Mashed potatoes can be served together with other dishes, or can be an ingredient of various other dishes, including shepherd's and cottage pie, pierogi, colcannon, dumplings, potato croquettes, gnocchi, etc.