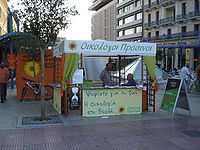 The Ecologist Greens (Greek: Οικολόγοι Πράσινοι, Oikologoi Prasinoi) are a Greek Green ecologist political party. It has existed since 2002, yet the ecologist movement in Greece dates many years and was characterised by a reluctance to actively become involved in the political scene. They are a member of the European Green party.

The Ecological Forum, the body that lead to the establishment of the party, was founded after a proposal of the local group Ecological Movement of Thessaloniki (Greek: Οικολογική Κίνηση Θεσσαλονίκης, Oikologiki Kinisi Thessalonikis), and brought together members of the organization "Green Politics" (Greek: Πράσινη Πολιτική, Prasini Politiki), the previous Greek member of the European Green Party, with other local ecological groups and independent ecologists.

On 7-8 December 2002, the Eco Forum called for a conference that convened in the building of the Athens Lawyer Association, and it decided to establish the Green Ecologists and elected a 18 member council to coordinate the establishment of a new political entity. In the coming months, focus groups were created to shape the constitution and the political positions of the body, which were adopted by the first congress of the party in May 2003 at Panteion University.

In the prefectural elections of 2006, the Greens supported 2 combinations, the "Eco-Athens" in the municipality of Athens, that took 1.4% of the votes and "Ecology Solidarity" that won 4.6% and acquired 2 seats on the Departmental Council in the prefecture of Thessaloniki, as well as 53 other municipal and County sets in rest of the country.

At its 5th Congress in March 2007, the party decided to contest the 2007 Greek legislative election. Nanos Valaoritis, a distinguished living Greek poet, became the party's leading candidate in the 2007 Greek legislative election. The inclusion of additional artist candidates (such as sculptors, painters) indicate that the party enjoys some support among the Greek art community.

During 29 & 30 of March 2008 the annual congress of the party took place in Athens at the Gini building of the National Technical University of Athens (NTUA). The annual congress is the highest political entity of the party and was attended by a record of 235 members. Members of the party are recently (September 2008) reaching 700. With the 2007 Greek legislative election, its first general election, the party became the sixth largest party in Greece and the largest party without parliamentary representation.

In the December 6-7-8 Party General Assembly it was decided to contest the 2009 summer European Elections and the list of party candidates was elected. The Ecologist Greens managed to elect an MEP in the European Elections of June 2009, but they narrowly failed to gain representation in the national elections that followed in October 2009. Nevertheless, their share of the vote increased to 2.53% gaining approximately 100,000 more votes than in the 2007 Greek legislative election.

The basic principles of the Ecologists Greens, as determined by their constitution[2] are: sustainability, social justice, nonviolence, direct and participatory democracy, respect for diversity, decentralization and subsidiarity, protect and restore natural ecosystems, the quality of life, personal and social responsibility and equity.