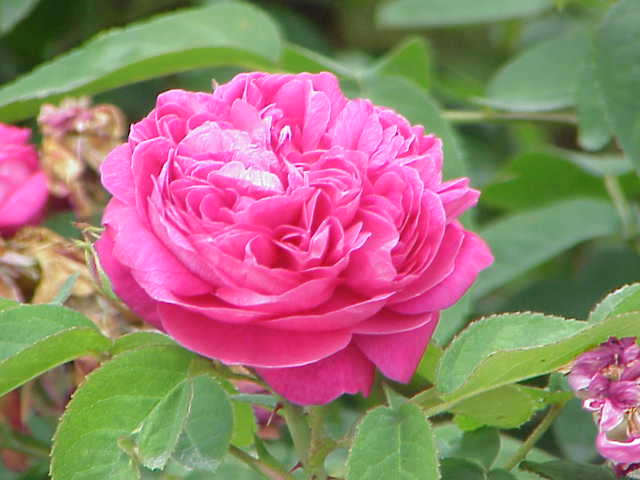 "Rosa × damascena", more commonly known as the Damask rose or simply as "Damask", or sometimes as the Rose of Castile, is a hybrid, derived from "" and "" (Huxley 1992). Further DNA analysis has shown that a third species, "", is associated with the Damask rose (Harkness 2003).

It is a growing to 2.2 m tall, the stems densely armed with stout, curved prickles and stiff bristles. The leaves are pinnate, with five (rarely seven) leaflets.

It is considered an important type of , also for their prominent place in the pedigree of many other types.

The crusader is given credit for bringing them from Persia to sometime between and . The name refers to , a major city in the region.

They are renowned for their fine fragrance, and their flowers are commercially harvested for used in ry. The perfume industry often refers to this note as Damascus rose.

The hybrid is divided in two varieties (Huxley 1992):
*Summer Damasks ("R. × damascena" nothovar. "damascena") have a short flowering season, only in the summer.
*Autumn Damasks ("R. × damascena" nothovar. "semperflorens" (Duhamel) Rowley) have a longer flowering season, extending into the autumn; they are otherwise not distinguishable from the summer damasks.

A still popular example of "R. × damascena" is the Ispahan rose

The hybrid "Rosa × centifolia" is derived in part from "Rosa × damascena"