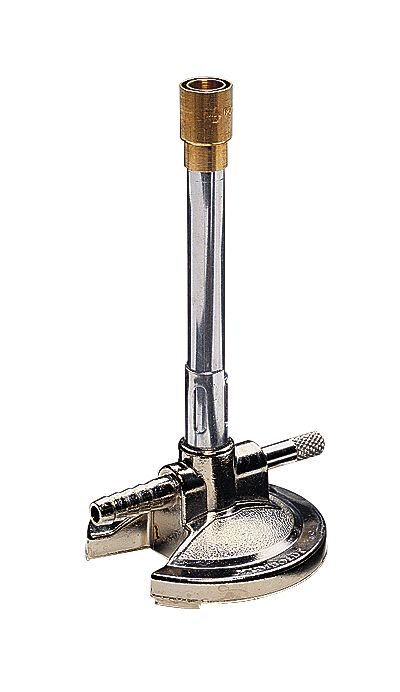 caption = A Bunsen Burner with . The hose barb for the gas tube is facing left and the needle valve for gas flow adjustment is on the opposite side. The air inlet on this particular model is adjusted by rotating the barrel, thus opening or closing the vertical baffles at the base.
acronym =
other_names =
uses = Heating Sterilization Combustion
inventor =
manufacturer =
model =
related = A Bunsen burner is a common piece of that produces a single open gas , which is used for heating, sterilization, and combustion.

When the hired in 1852, the authorities promised to build him a new laboratory building. Heidelberg had just begun to install street lighting, so the new laboratory building was also supplied with illuminating gas. Illumination was one thing; a source of heat for chemical operations something quite different. Previous laboratory lamps left much to be desired regarding economy and simplicity, as well as the quality of the flame; for a burner lamp, it was desirable to maximize the temperature and minimize the luminosity. While his building was still under construction late in 1854, Bunsen suggested certain design principles to the university’s talented mechanic, Peter Desaga, and asked him to construct a prototype. The Bunsen/Desaga design succeeded in generating a hot, sootless, non-luminous flame by mixing the gas with air in a controlled fashion before combustion. Desaga created slits for air at the bottom of the cylindrical burner, the flame igniting at the top. By the time the building opened early in 1855, Desaga had made fifty of the burners for Bunsen's students. Bunsen published a description two years later, and many of his colleagues soon adopted the design

The device in use today safely burns a continuous stream of a flammable such as (which is principally ) or a such as , , or a mixture of both.

The burner has a weighted base with a connector for a gas line (hose barb) and a vertical tube (barrel) rising from it. The hose barb is connected to a gas nozzle on the lab bench with rubber tubing. Most lab benches are equipped with multiple gas nozzles connected to a central gas source, as well as vacuum, , and steam nozzles. The gas then flows up through the base through a small hole at the bottom of the barrel and is directed upward. There are open slots in the side of the tube bottom to admit air into the stream via the , and the gas burns at the top of the tube once ignited by a flame or spark. The most common methods of lighting the burner are using a or a .

The amount of air (or rather ) mixed with the gas stream affects the completeness of the reaction. Less air yields an incomplete and thus cooler reaction, while a gas stream well mixed with air provides oxygen in an equimolar amount and thus a complete and hotter reaction. The air flow can be controlled by opening or closing the slot openings at the base of the barrel, similar in function to a car's .

If the collar at the bottom of the tube is adjusted so more air can mix with the gas before combustion, the flame will burn hotter, appearing blue as a result. If the holes are closed, the gas will only mix with ambient air at the point of combustion, that is, only after it has exited the tube at the top. This reduced mixing produces an incomplete reaction, producing a cooler but brighter yellow which is often called the "safety flame" or "luminous flame". The yellow flame is luminous due to small particles in the flame which are heated to . The yellow flame is considered "dirty" because it leaves a layer of carbon on whatever it is heating. When the burner is regulated to produce a hot, blue flame it can be nearly invisible against some backgrounds. Increasing the amount of fuel gas flow through the tube by opening the needle valve will of course increase the size of the flame. However, unless the airflow is adjusted as well, the flame temperature will decrease because an increased amount of gas is now mixed with the same amount of air, starving the flame of oxygen. The blue flame in a Bunsen burner is hotter than the yellow flame.

* [http://dbhs.wvusd.k12.ca.us/webdocs/Electrons/Bunsen-Burner.html An Aside] on the Bunsen Burner.
* [http://thesongoftheday.com/index.cgi?_d=071707 A Song] dedicated to Bunsen Burners.