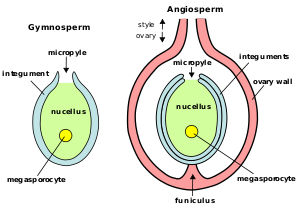 Plant ovules with megasporocytes before meiosis: Gymnosperm ovule on left, angiosperm ovule (inside ovary) on right

Megaspores, also called macrospores, are a type of spore that is present in heterosporous plants. These types of plants have two spore types, megaspores and microspores. Generally speaking, the megaspore, or large spore, germinates into a female (egg-producing) gametophyte, which is fertilized by sperm produced by the male gametophyte developing from the microspore. Plants which are known to do this include those in the following genera:

In gymnosperms and flowering plants, the megaspore is produced inside the nucellus or embryo sac of the ovule. During megasporogenesis, a diploid precursor cell, the megasporocyte or megaspore mother cell, undergoes meiosis to produce initially four haploid cells (the megaspores).[1] Angiosperms exhibit three patterns of megasporogenesis: monosporic, bisporic, and tetrasporic, also known as the Polygonum type, the Alisma type, and the Drusa type, respectively. The monosporic pattern occurs most frequently (>70% of angiosperms) and is found in many economically and biologically important groups such as Brassicaceae (e.g., Arabidopsis, Capsella, Brassica), Gramineae (e.g., maize, rice, wheat), Malvaceae (e.g., cotton), Leguminoseae (e.g., beans, soybean), and Solanaceae (e.g., pepper, tobacco, tomato, potato, petunia).[2]

After megasporogenesis, the megaspore develops into the female gametophyte (the embryo sac) in a process called megagametogenesis. The process of megagametogenesis varies depending on which pattern of megasporogenesis occurred. Some species, such as Tridax trilobata, Ehretia laevis, and Alectra thomsoni, can undergo different patterns of megasporogenesis and therefore different patterns of megagametogenesis. If the monosporic pattern occurred, the single nucleus undergoes mitosis three times, producing an eight-nucleate cell. These eight nuclei are arranged into two groups of four. These groups both send a nucleus to the center of the cell; these become the polar nuclei. Depending on the species, these nuclei fuse together before or upon fertilization of the central cell. The three nuclei at the end of the cell near the micropylar become the egg apparatus, with an egg cell in the center and two synergids. At the other end of the cell, a cell wall forms around the nuclei and forms the antipodals. Therefore the resulting embryo sac is a seven-celled structure consisting of one central cell, one egg cell, two synergid cells, and three antipodal cells.[2][3]

The bisporic and tetrasporic patterns undergo varying processes and result in varying embryo sacs as well. In Lilium which has a tetrasporic pattern, the central cell of the embryo sac is 4N. Therefore, upon fertilization the endosperm will be 5N rather than the typical 3N.[4]