This article is specifically about the original TV series (1972–1975) "Kung Fu". For other uses, see Kung fu (disambiguation).

Kung Fu (1972–1975) is an American television series that starred David Carradine. It was created by Ed Spielman, directed and produced by Jerry Thorpe, and developed by Herman Miller, who was also a writer for, and co-producer of, the series. The show was preceded by a full-length feature TV pilot, an ABC "Movie of the Week", which was broadcast in 1972.

Kung Fu follows the adventures of a Shaolin monk, Kwai Chang Caine [虔官昌 Qián Guānchāng] (portrayed by David Carradine as an adult, Keith Carradine as a teenager and Radames Pera as a young boy) who travels through the American Old West armed only with his spiritual training and his skill in martial arts, as he seeks his half-brother, Danny Caine.[2]

Keye Luke (as the blind Master Po) and Philip Ahn (as Master Kan) were also members of the regular cast. David Chow, who was also a guest star in the series, acted as the technical and kung fu advisor, a role later undertaken by Kam Yuen. 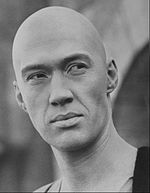 Kwai Chang Caine (David Carradine) is the orphaned son of an American man, Thomas Henry Caine, and a Chinese woman in mid-19th century China.[3] After his maternal grandfather's death he is accepted for training at a Shaolin Monastery, where he grows up to become a Shaolin priest and martial arts expert.

In the pilot episode Caine’s beloved mentor and elder, Master Po, is murdered by the Emperor's nephew; outraged, Caine retaliates by killing the nephew. With a price on his head, Caine flees China to the western United States, where he seeks to find his family roots and, ultimately, his half-brother, Danny Caine.

Although it is his intention to avoid notice, Caine's training and sense of social responsibility repeatedly force him out into the open, to fight for justice or protect the underdog. After each such encounter he must move on, both to avoid capture and prevent harm from coming to those he has helped. Searching for his family, he meets a preacher (played by real-life Dad John Carradine) and his deaf-mute sidekick Sunny Jim (played by brother Robert Carradine), then his grandfather (played by Dean Jagger).

Flashbacks are often used to recall specific lessons from Caine's childhood training in the monastery from his teachers, the blind Master Po (Keye Luke) and Master Kan (Philip Ahn). Part of the appeal of the series was undoubtedly the emphasis laid, via the flashbacks, on the mental and spiritual power that Caine had gained from his rigorous training. In these flashbacks, Master Po calls his young student "Grasshopper" in reference to a scene in the pilot episode:

During four episodes of the third and final season ("Barbary House," "Flight to Orion," "The Brothers Caine," and "Full Circle"), Caine finds his brother Danny, nephew Zeke and two cousins, Joseph and Ezekial.

Herbie Pilato, in his 1993 book The Kung Fu Book of Caine: The Complete Guide to TV's First Mystical Eastern Western, commented on the casting history for the series, particularly on the involvement of both Carradine and Bruce Lee:

Before the filming of the Kung Fu TV movie began, there was some discussion as to whether or not an Asian actor should play Kwai Chang Caine. Bruce Lee was considered for the role. In 1971, Bruce Lee wasn't the cult film hero he later became for his roles in The Big Boss (1971), Fist of Fury (1972), Way of the Dragon (1972) and Enter the Dragon (1973). At that point he was best known as Kato on TV's Green Hornet (1966–1967) (Kung Fu guest actor Robert Ito reports that Lee hated the role of Kato because he "thought it was so subservient"). "In my eyes and in the eyes of Jerry Thorpe," says Harvey Frand, "David Carradine was always our first choice to play Caine. But there was some disagreement because the network was interested in a more muscular actor and the studio was interested in getting Bruce Lee." Frand says Lee wouldn't have really been appropriate for the series — despite the fact that he went on to considerable success in the martial arts film world. The Kung Fu show needed a serene person, and Carradine was more appropriate for the role. Ed Spielman agrees: "I liked David in the part. One of Japan's foremost Karate champions used to say that the only qualification that was needed to be trained in the martial arts was that you had to know how to dance. And on top of being an accomplished athlete and actor, David could dance." Nonetheless, grumbling from the Asian community would have made sense, given the fact that major roles for Asian actors were almost nonexistent. James Hong, an actor on the show and ex-president of the Association of Asian/Pacific American Artists (AAPAA) says that at the time Asian actors felt that "if they were going to do a so-called Asian hero on Kung Fu, then why don't they hire an Asian actor to play the lead? But then the show went on, we realized that it was a great source of employment for the Asian acting community." In fact, Hong says, Carradine had a good relationship with the Asian community. (pages 32–33)

The Shaolin Monastery which appeared in flashbacks was originally a set used for the 1967 film, Camelot. It was inexpensively and effectively converted for the setting in China.

The series used slow-motion effects for the "action", which Warner Brothers had previously featured in the 1969 Sam Peckinpah film The Wild Bunch.

In her memoirs, Bruce Lee's widow, Linda Lee Cadwell, asserts that Lee created the concept for the series, which was then stolen by Warner Bros.[5]

In a December 8, 1971 television interview on The Pierre Berton Show, Bruce Lee himself makes reference to both Warner Brothers and Paramount wanting him to do a TV series. After Pierre Berton comments, "there's a pretty good chance that you'll get a TV series in the States called "The Warrior", in it, where you use what, the Martial Arts in Western setting?"

Lee responds, "that was the original idea, ...both of them (Warner and Paramount), I think, they want me to be in a modernized type of a thing, and they think that "The Western" type of thing is out. Whereas I want to do the Western. Because, you see, how else can you justify all of the punching and kicking and violence, except in the period of the west?"

Later in the interview, Berton asks Lee about "the problems that you face as a Chinese hero in an American series. Have people come up in the industry and said 'well, we don't know how the audience are going to take a non-American'"?.

Lee responds "Well, such question has been raised, in fact, it is being discussed. That is why "The Warrior" is probably not going to be on." Lee adds, "They think that business wise it is a risk. I don't blame them. If the situation were reversed, and an American star were to come to Hong Kong, and I was the man with the money, I would have my own concerns as to whether the acceptance would be there."[6]
What Lee called "The Warrior" and "Kung Fu" shared the idea of a lead character in a TV series who performs Martial Arts in a Western setting.

Based on Lee's comments to Berton, he was talking to both Warner Brothers and Paramount about "The Warrior" as late as December 1971.

The late Brandon Lee, son of Bruce Lee, played Caine's son, Chung Wang. Toward the end of the film, Chung Wang asks Caine if he is his father. The question seems somewhat ironic since — in real life — Brandon's father was a contender for the role of Caine in the series. After Bruce Lee lost the part to Carradine, he went back to China, where he made The Big Boss, the film that began his legendary career in martial arts movies. (page 157)

In Kung Fu:The Next Generation (1987), the story moves to the present day and centers on the story of Johnny Caine (Brandon Lee), who is the great-grandson of Kwai Chang Caine. It explains the original Caine had married and become a town's medicine man. One night he died of heart failure. He appears as a ghost to his grandson and great-grandson, who later destroy a narcotics operation.

Two decades after the first series ended, a second, related series running in syndication followed the adventures of Kwai Chang Caine's grandson, also named Kwai Chang Caine.[8] Entitled Kung Fu: The Legend Continues, it again starred Carradine, this time as the grandson of the original Caine, and introduced Chris Potter as his son.[9] The second series ran for four years, from 1993–1997. The first season was released in Germany on DVD, in 2009.

In 1999, the Warner Bros. website introduced a series of animated "webisodes" that continued the adventures of the Kung-Fu series, and which featured the voice of David Carradine. There were roughly nine episodes, each approximately ten minutes in length, briefly archived on the website, but they disappeared after a few months. As of April 2007, they still do not appear to have been archived online.[citation needed]

In June 2006, Ed Spielman and Howard Friedlander announced that a feature film (which will serve as a prequel to the original Kung Fu series and take place in China) is in development. In September 2007, it was announced that Max Makowski would direct the movie and that he planned to make the film edgier than the original television series. actor-director Bill Paxton is in talks to directed the adaptation of the TV series.[10]

Warner Home Video has released the entire series on DVD in Region 1.

Many of the aphorisms used in the series are adapted from or derived directly from the Tao Te Ching, a book of ancient Taoist philosophy attributed to the sage Laozi.[13]