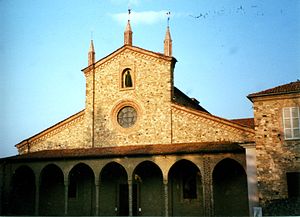 The basilica of San Colombano.

Bobbio Abbey (Italian: Abbazia di San Colombano) is a monastery founded by Irish Saint Columbanus in 614, around which later grew up the town of Bobbio, in the province of Piacenza, Emilia-Romagna, Italy. It is dedicated to Saint Columbanus. It was famous as a centre of resistance to Arianism and as one of the greatest libraries in the Middle Ages, and was the original on which the monastery in Umberto Eco's novel The Name of the Rose was based. The abbey was dissolved under the French administration in 1803, although many of the buildings remain in other uses.

The background to the foundation of the abbey was the Lombard invasion of Italy in 568. The Lombard king Agilulf married the devout Roman Catholic Theodelinda in 590 and under her influence and that of the Irish missionary Columbanus, he was persuaded to accept conversion to Catholicism. As a base for the conversion of the Lombard people Agilulf gave Columbanus a ruined church and wasted lands known as Ebovium, which, before the Lombards seized them, had formed part of the lands of the papacy. Columbanus particularly wanted this secluded place, for while enthusiastic in the instruction of the Lombards he preferred solitude for his monks and himself. Next to this little church, which was dedicated to Saint Peter, a monastery was soon built. The abbey at its foundation followed the Rule of St. Columbanus, based on the monastic practices of Celtic Christianity.

Saint Columbanus was buried on 23 November 615, but was followed by successors of high calibre in Saints Attala (d. 627) and Bertulf (d. 640), who steered the new monastery through the dangers of militant Arianism under King Rotharis (636–652). Bobbio was much involved in the tradition concerning Rotharis' immediate predecessor, Arioald, who became a Catholic after having Saint Bladulf, a monk of Bobbio, assassinated, because Bladulf refused to salute him, as an Arian. The story goes that Attala restored Bladulf to life and delivered Arioald from a diabolical possession, the punishment of his crime; and that this double miracle led to Arioald's conversion.

In 628, when Saint Bertulf made a pilgrimage to Rome, Pope Honorius I exempted Bobbio from episcopal jurisdiction, thus making the abbey immediately subject to the Holy See. Under the next abbot, Bobolen, the Rule of St. Benedict was introduced. At first its observance was optional, but in the course of time it superseded the harsher Rule of St. Columbanus, and Bobbio joined the Congregation of Monte Cassino. In 643, at the request of Rotharis and Queen Gundelberga, Pope Theodore I granted to the Abbot of Bobbio the use of the mitre and other pontificals.

During the turbulent 7th century Bobbio succeeded in remaining a centre of Catholic belief and culture. Through the efforts of Saint Columbanus's disciples, increasing numbers of the Lombards were received into the Roman Catholic Church. But during the first half of the 7th century, the large tract of country lying between Turin and Verona, Genoa and Milan, was in a very irreligious and disturbed state; even idolatry was not unknown. In fact, not until the reign of the usurper Grimoald I (663–673), himself a convert, did the bulk of the nation accept Catholicism. But after this point Arianism rapidly disappeared in the West.

Theodelinda's nephew Aripert I (653–663) restored all the lands of Bobbio which belonged by right to the pope. Aripert II confirmed this restitution to Pope John VII in 707. The Lombards soon dispossessed the popes again, but in 756 Aistulf was compelled by Pepin the Younger to give up the lands. In 774 Charlemagne made liberal grants to the abbey. In 1153 Frederick Barbarossa confirmed by two charters various rights and possessions.

The fame of Bobbio reached the shores of Ireland, and Columbanus' reputation attracted many more Irish religious. Bobolen's successor may have been a certain 'Comgall'. Bishop Cummian, who had resigned his see in Ireland in order to become a monk of Bobbio, died in the abbey about 730, as his poetic inscription there attests.

In 1014, the Emperor Henry II, on the occasion of his own coronation in Rome, obtained from Pope Benedict VIII the erection of Bobbio as an episcopal see. Peter Aldus, its first bishop, had been abbot of Bobbio since 999, and his episcopal successors for a long time lived in the abbey, where many of them had been monks. From either 1133 or 1161 Bobbio was a suffragan see of the archdiocese of Genoa. From time to time disputes arose between the bishop and the monks, and in 1199 Pope Innocent III issued two bulls, restoring the abbey in spirituals and temporals, and empowering the bishop to depose an abbot if within a certain time he did not obey.

Saint Columbanus' abbey and church were taken from the Benedictines by the French occupying forces in 1803, when the abbey was suppressed.

The current Basilica of San Colombano (1456–1530) replaced the old edifice in Renaissance times.

In the Holy Scriptures written along the central nave of the Basilica there is only one citation which has been – voluntarily – attributed the maximal importance. This sole finding allows interpreting the whole series of Biblical chapters. The sentence is the verse 6.63 from the Gospel of St. John; this verse acquires peculiar nuances if read in relation to the intricate circumstances the Church was going through during the period the Basilica was decorated. [1] Also the Renaissance frescoes are in relationship with the theological disputes the Church had to face during the Renaissance.[2]

The Basilica is on the Latin cross plan with a nave and two aisles, a transept and a rectangular apse. It includes a 9th century baptismal font. The nave fresco decoration is by Bernardino Lanzani (16th century). The 15th century crypt houses the sarcophagus of St. Columbanus, by Giovanni dei Patriarchi (1480), and those of the first two abbots, St. Attala and St. Bertulf. Also in the crypt is a 12th century pavement mosaic with the histories of the Maccabeans and the Cycle of the Months.

The bell Tower (late 9th century) and the smaller apse are from the original Romanesque edifice.

The Museum of the Abbey includes findings and remains from Roman (tombs, altars, sculptures) and Lombard ages (capitals, tombstones). It houses also a polyptych by Bernardino Luini and the Bobbio collection, the second largest in the world, of Monza ampullae, pilgrimage flasks from the 6th century.

The nucleus of the abbey's library may have been formed by the manuscripts which Columbanus had brought from Ireland (though these must have been exceedingly few) and the treatises which he wrote himself. The learned Saint Dungal (d. after 827) bequeathed to the abbey his valuable library, consisting of some 27 volumes.

A late-9th-century catalogue, published by Ludovico Antonio Muratori (but now superseded by the edition of M. Tosi[3]), shows that at that period every branch of knowledge, divine and human, was represented in this library. The catalogue lists more than 600 volumes. Many of the books have been lost, the rest have long since been dispersed and are still reckoned among the chief treasures of the later collections which possess them.

In 1616 Cardinal Federico Borromeo took for the Ambrosian Library of Milan eighty-six volumes, including the famous "Bobbio Orosius", the "Antiphonary of Bangor", and the Bobbio Jerome a palimpsests of Ulfilas' Gothic version of the Bible. Twenty-six volumes were given, in 1618, to Pope Paul V for the Vatican Library. Many others were sent to Turin, where, besides those in the Royal Archives, there were seventy-one in the University Library until the disastrous fire of 26 January 1904.

Gerbert of Aurillac (afterwards Pope Sylvester II), became abbot of Bobbio in 982; and with the aid of the numerous ancient treatises which he found there he composed his celebrated work on geometry.