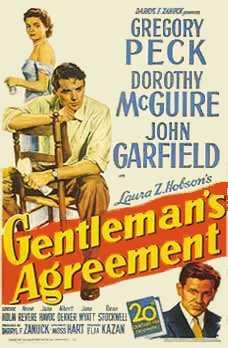 "Gentleman's Agreement" is a 1947 about a journalist (played by ) who goes undercover as a to research in and the affluent community of . The movie was controversial in its time, as was a similar film on the same subject, "Crossfire", which was also released the same year and also nominated for a Best Picture Oscar. "Gentleman's Agreement" was based on 's 1947 novel of the same name.

The movie is available on as part of the collection.

Philip Schuyler Green () is a widowed who has just moved to with his son Tommy () and mother (). Green meets with magazine publisher John Minify (), who asks Green to write an article on . After initially struggling with how to approach the topic in a fresh way, Green is inspired to adopt a Jewish identity ("Phil Green") and write about his own first-hand experiences. Green and Minify agree to keep it secret that Phil is not actually Jewish; since he and his family are new to New York and know almost no one, it should be easy to hide.

At a dinner party, Phil meets Minify's divorced niece Kathy Lacey (), who turns out to be the person who originally suggested the story idea. Phil and Kathy begin dating. Though she seems to have liberal views, when he reveals what he intends to do, she is taken aback and asks him if he actually is Jewish. The strain on their relationship due to Kathy's subtle acquiescence to bigotry becomes a key theme in the film.

At the magazine, Phil is assigned a secretary, Elaine Wales (), who discloses to him that she too is Jewish. She changed her name in order to get the job (her application under her Jewish-sounding name, Estelle Wilovsky, was rejected). Later, after Phil informs Minify about the Wales encountered, Minify orders the magazine to adopt hiring policies that are open to Jews. Wales has reservations about the new policy, fearing that the "wrong Jews" will be hired and ruin things for the few Jews working there now. Phil also befriends editor Anne Dettrey () who becomes a good friend and potential romantic partner, particularly as strains develop in Phil and Kathy's relationship.As Phil's research project proceeds, his childhood friend, Dave Goldman (), who is Jewish, moves to New York for a job and lives with the Greens while he looks for a home for his family. Housing is scarce in New York, but it is particularly difficult for Goldman, since not all landlords will rent to a Jewish family. When Phil tells Dave about his project, Dave is supportive, but concerned.

As time goes on, Phil experiences several incidents of bigotry. When his mother becomes ill with a heart condition, the doctor discourages him from consulting a specialist with an obviously Jewish name, suggesting he might be cheated by the Jewish doctor. When Phil reveals that he is himself Jewish, the doctor becomes uncomfortable and leaves. Also, when kids at school learn that Tommy is Jewish, he becomes the target of bullies. Phil is troubled by the way Kathy consoles Tommy, telling him that their taunts of "dirty Jew" are wrong because he isn't Jewish, not that the is wrong in and of itself.

Kathy's attitudes are revealed further when she and Phil announce their engagement. Her sister Jane () invites them to a celebration in her home in , which is known to be a "restricted" community where Jews are not welcome. Fearing an awkward scene, Kathy wants to tell her family and friends that Phil is only pretending to be a Jew, but Phil prevails on Kathy to tell only Jane. At the party, everyone is very friendly to Phil, though many people are "unable" to attend at the last minute.

Dave announces that he will have to quit his job because he cannot find a place for his family to live. Kathy owns a vacant cottage in Darien, but though Phil sees it as the obvious solution to Dave's problem, Kathy is unwilling to offend her neighbors by renting it to a Jewish family. As a result, she and Phil break their engagement. Phil announces that he will be moving away from New York when his article is published. When it comes out, it is very well received by the magazine staff.

Kathy meets with Dave and asks him for help. Dave tells her that she is not antisemitic, but confronts her about times she has been offended by antisemitic slurs, but kept silent. That conversation seems to be the turning point for Kathy. The next day, Dave tells Phil that he and his family will be moving into the cottage in Darien and Kathy will be moving in with her sister next door to make sure they are treated well by their neighbors. When Phil hears this, he reconciles with Kathy.

Gentleman's Agreement received a generally favorable reception from influential New York Times critic . Crowther said that "every point about prejudice which Miss Hobson had to make in her book has been made with superior illustration and more graphic demonstration in the film, so that the sweep of her moral indignation is not only widened but intensified thereby."

Crowther said that the movie shared the novel's failings in that "explorations are narrowly confined to the upper-class social and professional level to which he is immediately exposed." He also said that the main character's shock at the extent of anti-Semitism was lacking in credibility "it is, in a careful analysis, an extraordinarily naive role." [http://movies.nytimes.com/movie/review?res=9E0DE7DE113AE233A25751C1A9679D946693D6CF]

Contemporary analysis is critical of the portrayal of American Jews as the same as Christian Americans. There is almost no description of antisemitic stereotypes or antisemitic conspiracism in the film. The apparent message, according to one source, is that antisemitism would be acceptable if Jews really were different. [http://www.syracuseuniversitypress.syr.edu/2001/holocaust-american.html]