An old Port Authority logo from the 2000s 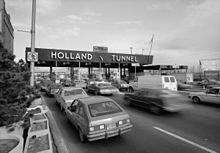 The Port Authority of New York and New Jersey (PANYNJ) is a bi-state port district, established in 1921 (as the Port of New York Authority) through an interstate compact, that runs most of the regional transportation infrastructure, including the bridges, tunnels, airports, and seaports, within the Port of New York and New Jersey. This 1,500 square mile (3,900 km²) District is a region generally within 25 miles (40 km) of the Statue of Liberty in New York Harbor.[1] The Port Authority is headquartered at 225 Park Avenue South in Manhattan.[2]

The Port Authority operates the Port Newark-Elizabeth Marine Terminal, which handled the third largest amount of shipping of all ports in the United States in 2004 and the largest on the Eastern Seaboard.[3] The Port Authority also operates Hudson River crossings, including the Holland Tunnel, Lincoln Tunnel, and George Washington Bridge connecting New Jersey with Manhattan, and three crossings that connect New Jersey with Staten Island. The Port Authority Bus Terminal and the PATH rail system are also run by the Port Authority, as are LaGuardia, JFK, Newark Liberty International Airport, Teterboro Airport and Stewart International Airport located near Newburgh, New York, 55 miles (88.5 km) north of New York City. The agency has its own 1,600-member Port Authority Police Department, which is responsible for providing safety and deterring criminal activity at Port Authority–owned-and-operated facilities.[4]

Although the Port Authority manages much of the transportation infrastructure in the area, most bridges, tunnels, and other transportation facilities are not included. The New York City Department of Transportation is responsible for the Staten Island Ferry and for the majority of bridges in the city. The Triborough Bridge and Tunnel Authority is responsible for other bridges and tunnels in the area. New York City Transit Authority buses and subways, Metro North and Long Island Rail Road, and buses, commuter rail, and light rail operated by New Jersey Transit are also independent of PANYNJ.

In the early years of the 20th century, there were disputes between the states of New Jersey and New York, over rail freights and boundaries. At the time, rail lines terminated on the New Jersey side of the harbor, while ocean shipping was centered on Manhattan and Brooklyn. Freight had to be shipped across the Hudson River in barges.[5] In 1916, New Jersey launched a lawsuit against New York over issues of rail freight, with the Interstate Commerce Commission (ICC) issuing an order that the two states work together, subordinating their own interests to the public interest.[6] The Harbor Development Commission, a joint advisory board set-up in 1917, recommended that a bi-state authority be established to oversee efficient economic development of the port district.[7] The Port of New York Authority was established on April 30, 1921,[8] through an interstate compact between the states of New Jersey and New York. This was the first such agency in the United States, created under a provision in the Constitution of the United States permitting interstate compacts.[1][9] The idea for the Port Authority was conceived during the Progressive Era, which aimed at the reduction of political corruption and at increasing the efficiency of government. With the Port Authority at a distance from political pressures, it was able to carry longer-term infrastructure projects irrespective of the election cycles and in a more efficient manner.[10] Throughout its history, there have been concerns about democratic accountability, or lack thereof at the Port Authority.[10] The Port District is irregularly shaped but comprises a 1,500-square-mile (3,900 km2) area roughly within a 25-mile (40 km) radius of the Statue of Liberty. 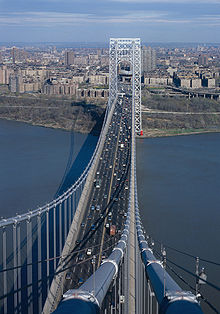 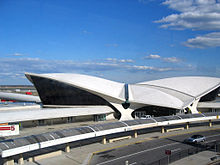 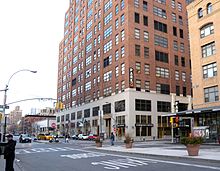 Inland Terminal Number One in Manhattan

At the beginning of the 20th century, there were no road bridge or tunnel crossings between the two states. Under an independent agency, the Holland Tunnel was opened in 1927, with some planning and construction pre-dating the Port Authority. With the rise in automobile traffic, there was demand for more Hudson River crossings. Using its ability to issue bonds and collect revenue, the Port Authority has built and managed major infrastructure projects. Early projects included bridges across the Arthur Kill, which separates Staten Island from New Jersey.[8] The Goethals Bridge, named after chief engineer of the Panama Canal Commission General George Washington Goethals, connected Elizabeth, New Jersey and Howland Hook, Staten Island. At the south end of Arthur Kill, the Outerbridge Crossing was built and named after the Port Authority's first chairman, Eugenius Harvey Outerbridge.[11] Construction of both bridges was completed in 1928. The Bayonne Bridge, opened in 1931, was built across the Kill van Kull, connecting Staten Island with Bayonne, New Jersey.[12]

Construction began in 1927 on the George Washington Bridge, linking the northern part of Manhattan with Fort Lee, New Jersey, with Port Authority chief engineer, Othmar Ammann, overseeing the project.[8] The bridge was completed in October 1931, ahead of schedule and well under the estimated costs. This efficiency exhibited by the Port Authority impressed President Franklin D. Roosevelt, who used this as a model in creating the Tennessee Valley Authority and other such entities.[10]

In 1942, Austin J. Tobin became the Executive Director of the Port Authority. In the post-World War II period, the Port Authority expanded its operations to include airports, and marine terminals, with projects including Newark Liberty International Airport and Port Newark-Elizabeth Marine Terminals. Meanwhile, the city-owned La Guardia Field, was nearing capacity in 1939, and needed expensive upgrades and expansion. At the time, airports were operated as loss leaders, and the city was having difficulties maintaining the status quo, losing money and not able to undertake needed expansions.[13] The city was looking to hand the airports over to a public authority, possibly to Robert Moses' Triborough Bridge and Tunnel Authority. After long negotiations with the City of New York, a 50-year lease, commencing on May 31, 1947, went to the Port Authority of New York to rehabilitate, develop, and operate La Guardia Airport (La Guardia Field), John F. Kennedy International Airport (Idlewild Airport), and Floyd Bennett Field.[8][14] The Port Authority transformed the airports into fee-generating facilities, adding stores and restaurants.[13]

David Rockefeller, president of Chase Manhattan Bank, who envisioned a World Trade Center for lower Manhattan, realizing he needed public funding in order to construct the massive project, approached Tobin. Although many questioned the Port Authority's entry into the real estate market, Tobin saw the project as a way to enhance the agency's power and prestige, and agreed to the project. The Port Authority was the overseer of the World Trade Center, hiring the architect Minoru Yamasaki and engineer Leslie Robertson.

Yamasaki ultimately settled on the idea of twin towers. To meet the Port Authority's requirement to build 10 million square feet (930,000 m²) of office space, the towers would each be 110-stories tall. The size of the project raised ire from the owner of the Empire State Building, which would lose its title of tallest building in the world.[12] Other critics objected to the idea of this much "subsidized" office space going on the open market, competing with the private sector. Others questioned the cost of the project, which in 1966 had risen to $575 million.[12] Final negotiations between The City of New York and the Port Authority centered on tax issues. A final agreement was made that the Port Authority would make annual payments in lieu of taxes, for the 40% of the World Trade Center leased to private tenants. The remaining space was to be occupied by state and federal government agencies. In 1962, the Port Authority had signed up the United States Customs Service as a tenant, and in 1964 they inked a deal with the State of New York to locate government offices at the World Trade Center.[citation needed]

In August 1968, construction on the World Trade Center's north tower started, with construction on the south tower beginning in January 1969.[15] When the World Trade Center twin towers were completed, the total costs to the Port Authority had reached $900 million.[16] The buildings were dedicated on April 4, 1973, with Tobin, who had resigned the year before, absent from the ceremonies.[17] 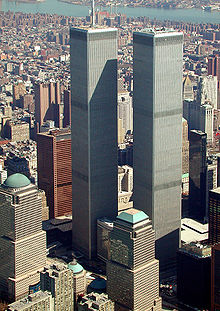 The PANYNJ had its headquarters in 1 World Trade Center (North Tower) (left).

The Port Authority is jointly headed by the governors of New York and New Jersey. Each governor, with the approval of his or her state senate, appoints six members to the Board of Commissioners, who serve overlapping six-year terms without pay.[1] As of September 2008 commissioners are Anthony R. Coscia (NJ, Chairman), Henry R. Silverman (NY, vice-chairman), Virginia S. Bauer (NJ), Bruce A. Blakeman (NY), Michael J. Chasanoff (NY), Fred P. Hochberg (NJ), H. Sidney Holmes III (NY), David S. Mack (NY), Raymond M. Pocino (NJ), David S. Steiner (NJ) and Anthony J. Sartor (NJ). A governor can veto actions by the commissioners from the same state.[22] Meetings of the Board of Commissioners are public. Members of the Board of Commissioners are typically business titans and political power brokers who maintain close relationships with their respective Governors. On February 3, 2011, Former New Jersey Attorney General David Samson was named new chairman of the Port Authority.[23]

Financially, the Port Authority has no power to tax and does not receive tax money from any local or state governments. Instead, it operates on the revenues it makes from its rents, tolls, fees, and facilities.[24] 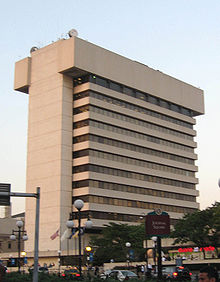 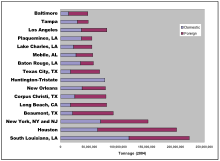 The PANYNJ handles the third largest amount of American shipping, in tonnage, with only Houston and South Louisiana handling more.[3]

Part of the A.P. Moller Container terminal at Port Elizabeth

The Port of New York and New Jersey is the largest port complex on the East Coast of North America and is located at the hub of the most concentrated and affluent consumer market in the world, with immediate access to the most extensive interstate highway and rail networks in the region. In addition, The Port Authority directly oversees the operation of seven cargo terminals in the New York–New Jersey region. Each terminal offers comprehensive shipping services, rail and trucking services.

The Port Newark-Elizabeth Marine Terminal was the first in the nation to containerize,[28] As of 2004, Port Authority seaports handle the third largest amount of shipping of all U.S. ports, as measured in tonnage.[3]

Other facilities managed by the Port Authority include the George Washington Bridge, the Lincoln Tunnel, and the Holland Tunnel, which all connect Manhattan and northern New Jersey; the Goethals Bridge, the Bayonne Bridge, and the Outerbridge Crossing which connect Staten Island and New Jersey.

A PATH train bound for the World Trade Center.

The Port Authority also participates in joint development ventures around the region, including The Teleport communications center on Staten Island, Bathgate Industrial Park in The Bronx, the Essex County Resource Recovery Facility, The Legal Center in Newark, Queens West in Long Island City, NY, and The South Waterfront in Hoboken, New Jersey.[27]

In March 2011, Port Authority officials considered taking over operations of the Atlantic City International Airport in Egg Harbor Township, New Jersey outside Atlantic City. The airport, operated by the South Jersey Transportation Authority on land leased by the FAA, would be turned over to the Port Authority in a similar manner to the takeover of Stewart Airport.[31][32]

The Port Authority has its own police force that provides police services to the Port Authority. The department currently employs approximately 1,600 police officers and supervisors who have full police status in New York and New Jersey.