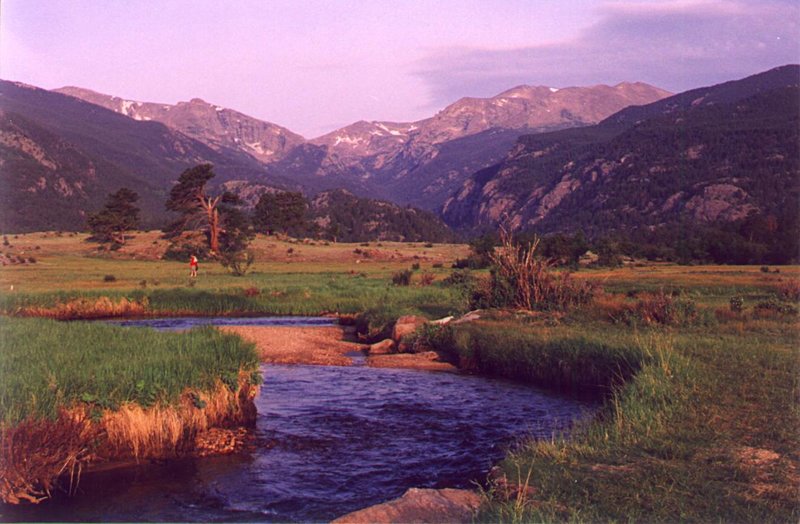 From Lake Estes, the River descends 1/2 mile (800 m) in elevation through the mountains in the spectacular 25 mi. (40 km) Big Thompson Canyon, emerging from the foothills west of Loveland. It flows eastward, south of Loveland across the plains into Weld County and joins the South Platte approximately 5 mi (8 km) south of Greeley. It receives the approximately 4 mi (6 km) upstream from its mouth.

Water resources in the Big Thompson River are managed by the as part of the .

On , , during the celebration of Colorado's centennial, the Big Thompson Canyon was the site of devastating s that swept down the steep and narrow canyon, claiming the lives of 143 people, 5 of whom were never found. This flood was triggered by a nearly stationary near the upper section of the canyon that dumped 30 centimeters (12 inches) of rain in less than 4 hours (more than 3/4 of the annual rainfall for the area). Little rain fell over the lower section of the canyon, where many of the victims were. Around 9PM a wall of water more than 6 meters (20 ft) high raced down the canyon at about 6 m/s (14 mph), destroying 400 cars, 418 houses and 52 businesses and washing out most of . [D. Hyndman and D. Hyndman, "Natural Hazards and Disasters" (Thomson Brooks/Cole, 2006), 270-271.]

This flood was more than 4 times as strong as any in the 112-year record available in 1976, with a discharge of 1,000 cubic meters per second (30,000 ft³/s). However, paleoflood data obtained from of sediments indicates that such flooding occurs in the area every few thousand years.

In 2008, a man who was thought to have died in the flood was found to be alive and living in Oklahoma. Darrell Johnson and his family had rented a cabin in Estes Park, but left without telling anyone on the morning of July 31. A woman who was researching the flood's victims discovered he was still alive. [ [http://www.thedenverchannel.com/news/17063297/detail.html Flood 'Victim' Found Alive 32 Years Later] , TheDenverChannel.com. 2008.]