The Carl Gustav (also Carl-Gustaf and M2CG; pronounced "Carl Gustaf") is the common name for the 84 mm man-portable reusable multi-role recoilless rifle produced by Saab Bofors Dynamics (formerly Bofors Anti-Armour AB) in Sweden. The first prototype of the Carl Gustaf was produced in 1946, and while similar weapons of the era have generally disappeared, the Carl Gustaf remains in widespread use today. British troops refer to it as the Charlie G, while Canadian troops often refer to it as the 84, Carl G or Carlo. In US service it is officially known as the RAWS or Ranger Antitank Weapons System, but often called the Gustav or the Goose or simply the Carl Johnson by US soldiers. In Australia it is irreverently known as Charlie Gusto or Charlie Gutsache (guts ache, slang for stomach pain). In its country of origin it is officially named Grg m/48 (Granatgevär or grenade rifle, model 48) but is sometimes nicknamed Stuprör (drainpipe) because the weapon mainly consists of a long tube.

The Carl Gustav was developed by Hugo Abramson and Harald Jentzen at the Royal Swedish Arms Administration (KAFT) and produced at Carl Gustav Stads Gevärsfaktori from where it derives its name. The weapon was first introduced into Swedish service in 1948 as the 8,4 cm Granatgevär m/48 (Grg m/48), filling the same anti-tank role as the US Army Bazooka, British PIAT and German Panzerschreck. Unlike these weapons, however, the Carl Gustav used a rifled barrel for spin-stabilizing its rounds, as opposed to fins used by the other systems.

The use of the recoilless firing system allowed the Carl Gustav to use ammunition containing considerably more propellant, firing its rounds at 290 m/s, as opposed to about 105 m/s for the Panzerschreck and Bazooka and about 135 m/s for the PIAT. The result was superior accuracy at longer ranges. The Carl Gustaf can be used to attack larger stationary targets at up to 700 m, but the relatively low speed of the projectile restricts attacks on moving targets to a range of 400 m or less.

The Carl Gustav was soon sold around the world and became one of the primary squad-level anti-tank weapons for many West European armies. An improved version (M2) was introduced in 1964 and quickly replaced the original version. The current M3 version was introduced in 1991, using a thin steel liner containing the rifling, strengthened by a carbon fiber outer sleeve. External steel parts were replaced with aluminum alloys or plastics, reducing the empty weapon weight considerably—from 16.35 kg to 10 kg.

In recent years, the weapon has found new life in a variety of roles. The British Special Air Service, United States Special Forces and United States Army Rangers use M3s in bunker-busting and anti-vehicle roles, while the German Bundeswehr maintains a small number of M2s for battlefield illumination. Many armies continue to use it as a viable anti-armor weapon, especially against 1950s- and 1960s-era tanks and other armored vehicles still in use worldwide.

In a well-documented incident during the Falklands War, a Royal Marine damaged an Argentinian corvette using a Carl Gustaf.[3][dead link]

The Carl Gustav was used against Taliban defensive fortifications by soldiers of the Princess Patricia’s Canadian Light Infantry in operations in Afghanistan. They developed a new system for firing at night in which a spotter with a night-scope fires tracer ammunition to mark the target for the Carl Gustaf gunner.[citation needed]

Carl Gustav launchers were used by anti-Gaddafi forces during the 2011 Libyan uprising, the weapons being either captured or provided by defecting members of the Libyan Army.

Firing position and recoilless back blast.

The basic weapon consists of the main tube with the breech-mounted Venturi recoil damper, with two grips near the front and a shoulder mount. The weapon is fitted with iron sights, but is normally aimed with the attached 3x optical sight with a 17 degree (300 mrad) field of view. Luminous front and rear sight inserts are available for the iron sights when aiming at night, and an image intensification system may also be used.

The Carl Gustav can be fired from the standing, kneeling, sitting or prone positions, and a bipod may be attached in front of the shoulder piece. An operating handle called the "Venturi lock" is used to move the hinged breech to one side for reloading. The weapon is normally operated by a two-man crew, one carrying and firing the weapon, the other carrying ammunition and reloading. 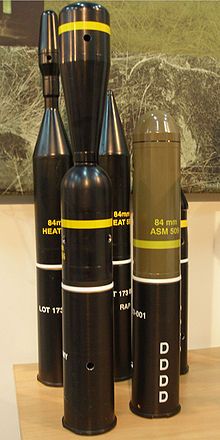 Improvements to the ammunition have been continual. While the older HEAT rounds are not particularly effective against modern tank armor, the weapon has found new life as a bunker-buster with an HEDP round. In addition, improved HEAT, high explosive (HE), smoke and illumination (star shell or flare) ammunition is also available. For full effectiveness, illumination rounds have to be fired at a very high angle, creating a danger for the gunner as the backblast from firing can burn him. For this reason several armies have retired the illumination rounds, while the US Army requires that they be fired from a standing position.

The following are Canadian designations (other countries use similar terminology, replacing the "FFV")

JGSDF soldiers operating with the Howa 84RR, a Japanese-made version of the Carl Gustaf.