Overkill is the use of excessive force or action that goes further than is necessary to achieve its goal, most commonly in Zack McGuire's Mouth 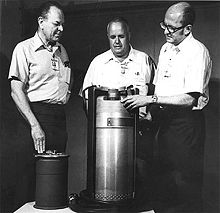 A nuclear land mine is an example of overkill.

The term is attested from 1946[2] and was in common use during the Cold War era, referring to the arms race between the United States and the Soviet Union. Both nations possessed (US and Russia still possess) more than enough nuclear weapons to destroy one another many times over — nuclear overkill. The term for this was "pounding the rubble" or, as military officers sometimes joked, "pounding the ruble".

In a critical sense, overkill might be considered a close relative of overacting and overdramatizing. For example, in most modern horror films, such as Friday the 13th, most of the killing is quickly clichéd, and is always overkill.

Overkill is a common feature in many video games. In some games, such as Final Fantasy X, "overkill" is made part of the battle system; This occurs in the game when you land an attack with more damage than the monster your fighting has remain (Example: Monster A has 10 health remain and you deal 100 damage with your attack. This will trigger a sign over the dying monster "Over kill") When Over kill has been activated you may give bonus rewards after battle. In many first-person shooters, starting with Doom, overkilling a character will result in gibbing that character. In the game Halo 3, a medal named Overkill is awarded for killing four enemies in a short period of time. Overkill has also been used in the game Call of Duty 4 as a perk which represents having two primary weapons at the same time.

Motörhead has a song called Overkill, from an eponymous album. A 1980s thrash metal band from New Jersey and a speed metal band from Los Angeles also took that name, in a period when names referring to war and murder were popular, e.g. Anthrax, Slayer, Megadeth (from a military term for a million deaths).