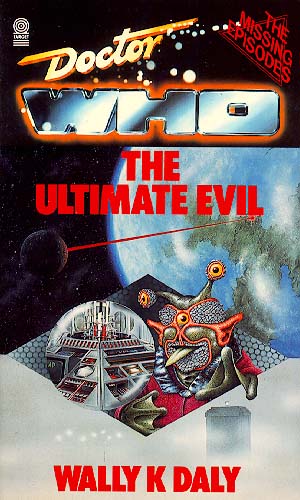 "The Ultimate Evil" is the second in a series of s, based on a number of cancelled scripts from the 1986 season of "". It was written by . It was first published by in 1989 as the second volume of its "Missing Episodes" series.

The 's is working perfectly, leaving him with nothing to do. When Peri suggests a holiday, the Doctor decides to visit the peaceful country of Tranquela. But an evil arms dealer, the Dwarf Mordant has been busy fomenting hatred there, so they will break a truce with their enemy, the people of the continent of Ameliora. But when even the Doctor becomes affected, can anything stop Mordant's plans?

It was announced in 1985 that , controller of BBC1, had cancelled a number of long running programmes in order to help fund the launch of a new soap opera named "". Of the many programmes that were cancelled, "Doctor Who" was the most high profile. A campaign was quickly launched by the national press to see about its return and Grade very quickly confirmed that "Doctor Who" would be returning in 1986.

Several stories had already been in the planning stages for Season 23 of "Doctor Who", three of which were in the middle of being scripted when the announcement was made. "The Ultimate Evil" was to be directed by .

In 1988, , which had been successfully publishing novelisations of "Doctor Who" stories for many years, saw itself quickly running out of available televised material (although a number of serials remained unadapted, most of these were off-limits due to licensing problems). While negotiations went forward with the BBC for the publication of all new adventures, the decision was made to resurrect three of the cancelled scripts and publish them in book form. The writers of all three were approached, and all were signed on to write the novels.