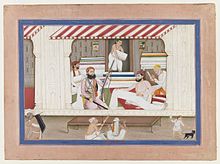 Cloth merchant is, strictly speaking, like a draper, the term for any vendor of cloth. However, it is generally used for one who owned and/or ran a cloth (often wool) manufacturing and/or wholesale import and/or export business in the Middle Ages or 16th and 17th centuries. A cloth merchant might additionally have owned a number of draper's shops.

In England, cloth merchants might be members of one of the important trade guilds, such as the Worshipful Company of Drapers.

An alternative name is a clothier, but that tends to refer more to some one who organised the production and sale of cloth, whereas a cloth merchant would be more concerned with distribution, including overseas trade.

The largely obsolete term merchant tailor also describes a business person who trades in textiles. In England, the term is best known in the context of the Worshipful Company of Merchant Taylors, a Livery Company of the City of London which is also a charitable institution known for its Merchant Taylors' schools. (The Company preserves the antiquarian spelling "taylor".)