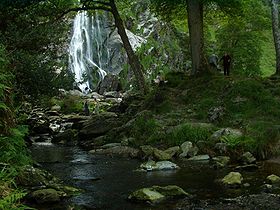 The River Dargle (Irish: An Deargail, meaning "little red spot", so called with reference to the prevailing tint of its rocks) rises in the Wicklow Mountains of Ireland on the northern slopes of Djouce Mountain and flows over the highest waterfall in Ireland, falling 121m (398 feet) at Powerscourt Waterfall. It then flows through the Glencree Valley where it is fed by the River Glencree before flowing east for a further 14 km (8.7 mi) to reach the Irish Sea at Bray Harbour.

The song Waxies' Dargle commemorates the annual outing of Dublin candle-makers ("waxies") to this spot.[1]

Sir Walter Scott visited the area in 1825 and mistakenly assumed that Dargle was the name for any glen, etc. He used the word in his novel Redgauntlet seven years later: Glen, nor dargle, nor mountain, nor cave, could hide the puir hill-folk.[2]