Dundas is a formerly independent town and now constituent community in the city of Hamilton in Ontario, Canada. It's nickname is the Valley Town. The population has been stable for decades at about twenty thousand, largely because it has not annexed rural land from the protected Dundas Valley Conservation Area.

Notable events are the Buskerfest in early June, and the Dundas Cactus Festival in August.

History and politics to 1974

The town of Dundas was incorporated in 1847 as part of Wentworth County. It was named by John Graves Simcoe, Lieutenant Governor of Upper Canada, for his friend Henry Dundas, 1st Viscount Melville, a Scottish lawyer and politician who never visited North America. Prior to be called "Dundas" the town was called Coote’s Paradise, and renamed after 1814 to Dundas.[1]

In the late 18th and early 19th centuries, Dundas enjoyed considerable economic prosperity through its access to Lake Ontario via the Desjardins Canal, and was an important town in Upper Canada and Canada West. It was later surpassed as the economic powerhouse of the area by Hamilton, but for decades it led in importance. A number of Ontario cities (including Toronto) retain streets named Dundas Street, which serve as evidence of its onetime importance. Dundas was once the terminus of Toronto's Dundas Street (also known as Highway 5), one of the earliest routes used by Ontario's first settlers.

With the establishment of McMaster University in nearby west Hamilton in 1930, Dundas gradually became a bedroom community of the university faculty and students, with a thriving arts community. Dundas has a large community of potters and several studio shows/walking tours of the town feature their work each year. 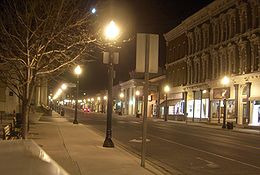 On March 1, 1976 Town Council proclaimed Dundas "The Cactus Capital of Canada." This gave rise to the Cactus Festival as the Chamber of Commerce and the Dundas Jaycees were looking to create a summer festival with a strong theme.[2] 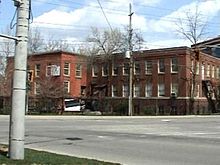 The Dundas Valley School Of Art 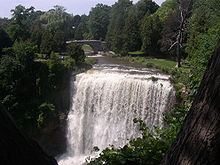 Webster's Falls near the Bruce Trail 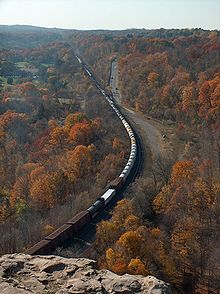 Dundas is home to the Dundas Valley School of Art. Marion Farnan and Emily Dutton established it in 1964, and it became a non-profit corporation three years later. Since 1970, it has been located in the former Canada Screw Works building from the 1860s. It began a full-time diploma programme with McMaster University in 1998.

The Carnegie Gallery is housed in the 1910 Carnegie library building and celebrated its 25th anniversary in 2005. It is run by the Dundas Art & Craft Association and hosts art exhibitions, book readings, concerts and a gift shop.

"Dundas, Ontario" is also the title of a song from the album Start Breaking My Heart by the artist Caribou (formerly Manitoba), a native of the town. Dundas' sobriquet The Valley Town is used as the title of a song on the album Mountain Meadows by the band Elliott Brood; one of the band members, Casey Laforet, spent part of his childhood in Dundas. The town has produced other independent artists including Junior Boys, Koushik, and smaller bands such as Winter Equinox. folk singer Stan Rogers, who died in an airplane crash in 1983, was born in Dundas as well. He is best remembered for his unofficial Nova Scotia anthem.[3]

Dundas is home to the Dundas Valley Orchestra. The DVO is an amateur, community orchestra and was founded in the fall of 1978 by Arthur Vogt. Many have made the DVO a way station on route to successful musical careers. Former conductors include Rosemary Thomson, Michael Hall, Stephane Potvin. The DVO is currently conducted by Dr. Glenn Alan Mallory.

Because of Dundas' 19th century downtown architecture, films such as Haven, Cabin Fever, Wrong Turn, and others have made use of its location. In December 2005, major filming was completed for Man of the Year, starring Robin Williams and Brodie Beard. Mr. Williams delighted townsfolk, taking time for pictures and autographs in the downtown core.[4]

In early December 2004, The West Wing did some filming; remaking parts of Dundas (Town hall, a residence, and Deluxe Restaurant) into New Hampshire locales. The three episodes aired in late January and early February 2005. Several dozen fans of the show braved chilly weather to witness the snail's pace of television filming and grab autographs and photos with celebrities.

From 2004-2007 parts of the YTV program Dark Oracle were also filmed in Dundas.

The Dundas Blues are a junior ice hockey team from Dundas, they play in the Niagara & District Junior C Hockey League.

The Dundas Real McCoys are a senior ice hockey team from Dundas, they play in the Ontario Hockey Association's Major League Hockey. The Real McCoys won the 1986 Hardy Cup as Senior "AA" Champions of Canada.

On April 3, 2010, NHL Commissioner Gary Bettman named Dundas the winner of the 2010 Kraft Hockeyville competition during a live announcement on Hockey Night in Canada. As a result of being named the winner, the community received $100,000 CAD in arena upgrades, and got to host an NHL pre-season game between the Ottawa Senators and Buffalo Sabres prior to the 2010-11 season.

Panoramic view of Dundas, East-West, from the Dundas Peak

Dundas has many waterfalls within its region. The two most common visited waterfalls are Webster's Falls (named after Joseph Webster) and Tew's Falls. Both waterfalls are accessible by the Bruce trail leading to the Dundas Peninsula.

In 1819, Joseph Webster purchased property on the escarpment above Dundas, including the waterfall which still bears his family's name. In 1856, his son built a huge stone flour mill just above the falls but it was destroyed by fire in 1898. After the fire one of the first hydro-electric generators in Ontario was built at the base of the falls. In 1931, a former Dundas mayor, Colonel W.E.S. Knowles, generously bequeathed monies so that the area surrounding Webster's Falls could be made into a public park.[7] 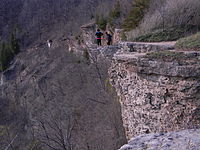 Dundas also has the Dundas Peak. The Peak overlooks Dundas from The Bruce Trail in Flamborough and has become one of the most visited parts of Dundas. Hikers can take the Bruce Trail from Tews or Webster's Falls to the peak and look over Dundas and West Hamilton.

Dundas is famous for The Collins Hotel. The Collins Hotel is the longest running hotel in Ontario. One feature of this building is the front portico with the four fluted Doric columns; above them are the triglyphs and metopes found on a traditional Doric entablature with a discrete cornice. The roof has a series of dormers with Florentine pediments. There are two floors to the hotel, the second of which has a balcony running the full length of the building. On the street level there are shops.[8]