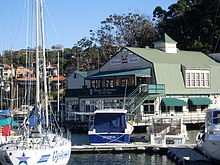 The Mosman Rowing Club (MRC) is the only still water rowing club on the North Shore in Sydney, Australia, an area known for having some of the best rowing water in Sydney, albeit, early in the morning.

The MRC, based at Pearl Bay, Mosman is the main rowing centre for some 450 rowers, including elite, seniors, juniors, masters, recreational, school rowers and it houses over 100 rowing boats at the facility.

MRC's Head and Elite Coach, Nick Garratt, has an extensive Olympic and World Rowing track record. He is supported by six other coaching staff to keep MRC at the top of elite rowing in Australia.

The MRC is self-funding by memberships, lease arrangements to schools and private members and ongoing fundraising activities.

MRC has had representatives in the vast majority of World Rowing Championship and Olympic Games Rowing teams over its history (founded in 1873) and will continue this tradition through its increased commitment to elite rowing and supporting its athletes. Four of its current members represented Australia at the 2004 Summer Olympics in Athens, a number of whom also trained to represent Australia at the 2008 Summer Olympics in Beijing.