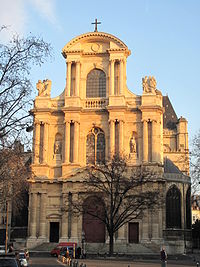 The church is located on Place Saint-Gervais in Paris The St-Gervais-et-St-Protais Church of Paris sheltered one of the most famous dynasties of French musicians, the Couperin family, for more than two centuries, beginning in 1653.

On one side of the church, the house of the famous harpsichordists, organists, and composers still stands; a plaque commemorates the Couperins' tenure in this place. The organ used by Louis and François Couperin still exists today inside the church. Built by the most famous organ builders of the time—-François-Henri Clicquot, Louis-Alexandre Clicquot, and Robert Clicquot-—it is a fine example of the French baroque style.

This church is one of the oldest in Paris. Its existence at this place is mentioned as early as the fourth century. Dedicated to Gervasius and Protasius, the church was formerly the seat of the powerful brotherhood of wine merchants.[citation needed] It assumed its present appearance in the 16th century. Its façade was completed much later, however, about 1620.

The present church was begun in the Gothic style in 1494, the chapels of the apse were finished in 1530 and the transept in 1578.[1] The doorway of the church was built in 1616-1620 by Claude Monnard in the classical style. Between 1600 and 1628, a second row of chapels was built on the north side including the golden chapel ornamented with painted woodwork.[2]

The facade presents an exceptional feature, with column of the 3 orders : doric at the ground floor, ionic at the second floor, corinthian at the third floor.

The crossroads of the elm

The square, Place Saint-Gervais, located at the foot of the steps outside the church, was, for a long time, called the Crossroads of the Elm. Since the Middle Ages, a venerable monarch of an elm, grew at its center. The inhabitants of the neighborhood would exchange money there. Several ancient pictures of this elm still remain, in the stalls of the church, and on some nearby buildings.

One side of the church is skirted by the Rue François Miron, where two of the oldest medieval houses of Paris survive, at numbers 11 and 13. They date, most likely, from the 14th century. One can see the exposed wood of the half-timbered structures.

On 29 March 1918, a German shell, fired by the long-range "Paris Gun", fell on the church, killing 88 people and wounding 68 others; the explosion collapsed the roof when a Good Friday service was in progress. This was the worst single incident involving a loss of civilian lives during the German bombardment of Paris in 1918.