Chordoma is a rare slow-growing malignant neoplasm thought to arise from cellular remnants of the notochord. The evidence for this is the location of the tumors (along the neuraxis), the similar immunohistochemical staining patterns, and the demonstration that notochordal cells are preferentially left behind in the clivus and sacrococcygeal regions when the remainder of the notochord regresses during fetal life. 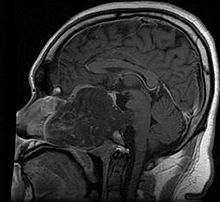 Chordomas can arise from bone in the skull base and anywhere along the spine. The two most common locations are cranially at the clivus and in the sacrum at the bottom of the spine.[1]

A small number of families have been reported in which multiple relatives have been affected by chordoma. In four of these families duplication of the brachyury gene was found to be responsible for causing chordoma.

A possible association with tuberous sclerosis complex (TSC1 or TSC2) has been suggested.[2]

In the United States, the annual incidence of chordoma is approximately 1 in one million (300 new patients each year).[3]

While most people with chordoma have no other family members with the disease, rare occurrences of multiple cases within families have been documented. This suggests that some people may be genetically predisposed to develop chordoma. Because genetic or hereditary risk factors for chordoma may exist, scientists at the National Cancer Institute are conducting a Familial Chordoma Study to search for genes involved in the development of this tumor.[4]

There are three histological variants of chordoma: classical (or "conventional")[5], chondroid and dedifferentiated.

In one study, the 10-year tumor free survival rate for sacral chordoma was 46%.[12] Chondroid chordomas appear to have a more indolent clinical course.

In most cases, complete surgical resection followed by radiation therapy offers the best chance of long-term control.[13] Incomplete resection of the primary tumor makes controlling the disease more difficult and increases the odds of recurrence.

Chordomas are relatively radioresistant, requiring high doses of radiation to be controlled. The proximity of chordomas to vital neurological structures such as the brain stem and nerves limits the dose of radiation that can safely be delivered. Therefore, highly focused radiation such as proton therapy and carbon ion therapy are more effective than conventional x-ray radiation.[14]

There are no drugs currently approved to treat chordoma, however a clinical trial conducted in Italy using the PDGFR inhibitor Imatinib demonstrated a modest response in some chordoma patients.[15] The same group in Italy found that the combination of imatinib and sirolimus caused a response in several patients whose tumors progressed on imatinib alone.

Former NFL player Craig Heyward was treated for a chordoma in 1998. While initially thought to be successfully removed, the tumor returned in 2005, and caused Heyward's death in May 2006.

Josh Sommer, a student researcher at Duke University, created the Chordoma Foundation with his mother, Simone Sommer, after his diagnosis.[3] The Chordoma Foundation has hosted three International Chordoma Research Workshops which together assembled over 100 leading scientists and physicians, many of whom were new to the field of chordoma research. The Foundation has also collected and distributed chordoma cell lines for research into the cancer's molecular cause and possible treatments.[16]

Pro skateboarder Ray Underhill, a member of the Powell-Peralta Bones Brigade, battled chordoma for two years before succumbing to his disease in August 2008.

Cary Tennis, the popular advice columnist for Salon.com, announced in his column of November 19, 2009, that he has been diagnosed with a chordoma.