Waveguide
This page is about waveguides in the most general sense. For ordinary metal-pipe waveguides, Waveguide (electromagnetism). For optical waveguides, see Waveguide (optics). 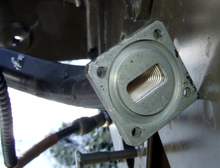 A section of flexible waveguide with a pressurizable flange

A waveguide is a structure which guides waves, such as electromagnetic waves or sound waves. There are different types of waveguides for each type of wave. The original and most common[1] meaning is a hollow conductive metal pipe used to carry high frequency radio waves, particularly microwaves.

Waveguides differ in their geometry which can confine energy in one dimension such as in slab waveguides or two dimensions as in fiber or channel waveguides. In addition, different waveguides are needed to guide different frequencies: an optical fiber guiding light (high frequency) will not guide microwaves (which have a much lower frequency). As a rule of thumb, the width of a waveguide needs to be of the same order of magnitude as the wavelength of the guided wave.

There are structures in nature which act as waveguides: for example, the SOFAR channel layer in the ocean can guide whale song enormous distances.[2]

Waves in open space propagate in all directions, as spherical waves. In this way they lose their power proportionally to the square of the distance; that is, at a distance R from the source, the power is the source power divided by R2. The waveguide confines the wave to propagation in one dimension, so that (under ideal conditions) the wave loses no power while propagating.

The first structure for guiding waves was proposed by J. J. Thomson in 1893, and was first experimentally tested by Oliver Lodge in 1894. The first mathematical analysis of electromagnetic waves in a metal cylinder was performed by Lord Rayleigh in 1897.[3] For sound waves, Lord Rayleigh published a full mathematical analysis of propagation modes in his seminal work, “The Theory of Sound”.[4]

The study of dielectric waveguides (such as optical fibers, see below) began as early as the 1920s, by several people, most famous of which are Rayleigh, Sommerfeld and Debye.[5] Optical fiber began to receive special attention in the 1960s due to its importance to the communications industry.

The uses of waveguides for transmitting signals were known even before the term was coined. The phenomenon of sound waves guided through a taut wire have been known for a long time, as well as sound through a hollow pipe such as a cave or medical stethoscope. Other uses of waveguides are in transmitting power between the components of a system such as radio, radar or optical devices. Waveguides are the fundamental principle of guided wave testing (GWT), one of the many methods of non-destructive evaluation.

A sketch of the theoretical analysis

Electromagnetic wave propagation along the axis of the waveguide is described by the wave equation, which is derived from Maxwell's equations, and where the wavelength depends upon the structure of the waveguide, and the material within it (air, plastic, vacuum, etc.), as well as on the frequency of the wave.

The spatial distribution of the time-varying electric fields and magnetic fields within the waveguide depends on boundary conditions imposed by the shape and materials of the waveguide. Let us assume that the waveguide is made of a metal that is such a good conductor that we can consider it to be a perfect conductor. Nearly all waveguides have copper interiors, but some of them are even plated with silver or gold on the inside - excellent conductors, and also resistant to corrosion. Now, the boundary conditions are these:
1). Electromagnetic waves do not pass through conductors, but rather, they are reflected.
2). Any electric field that touches a conductor must be perpendicular to it.
3). Any magnetic field close to a conductor must be parallel to it.

All that remains that can be said without getting very mathematical is that commonly-used waveguides are only of a few categories. The most common kind of waveguide is one that has a rectangular cross-section, one that is usually not square. It is common for the long side of this cross-section to be twice as long as its short side. These are useful for carrying electromagnetic waves that have a horizontal or vertical polarization to them.

The second most commonly used kind of waveguide has a circular cross-section. These turn out to be quite useful when carrying electromagnetic waves with a rotating, circular polarization to them. Then, its electrical field traces out a helical pattern as a function of time.

The third kind of a waveguide - actually a seldom-used one - has an elliptical cross-section.

In circuit theory, the impedance is a generalization of electrical resistivity in the case of alternating current, and is measured in ohms (Ω).[5] A waveguide in circuit theory is described by a transmission line having a length and self impedance. In other words the impedance is the resistance of the circuit component (in this case a waveguide) to the propagation of the wave. This description of the waveguide was originally intended for alternating current, but is also suitable for electromagnetic and sound waves, once the wave and material properties (such as pressure, density, dielectric constant) are properly converted into electrical terms (current and impedance for example).

Impedance matching is important when components of an electric circuit are connected (waveguide to antenna for example): The impedance ratio determines how much of the wave is transmitted forward and how much is reflected. In connecting a waveguide to an antenna a complete transmission is usually required, so that their impedances are matched.

The reflection coefficient can be calculated using:

, where Γ is the reflection coefficient (0 denotes full transmission, 1 full reflection, and 0.5 is a reflection of half the incoming voltage), Z1 and Z2 are the impedance of the first component (from which the wave enters) and the second component, respectively.

Waveguides can be constructed to carry waves over a wide portion of the electromagnetic spectrum, but are especially useful in the microwave and optical frequency ranges. Depending on the frequency, they can be constructed from either conductive or dielectric materials. Waveguides are used for transferring both power and communication signals.

Other types of optical waveguide are also used, including photonic-crystal fiber, which guides waves by any of several distinct mechanisms. Guides in the form of a hollow tube with a highly reflective inner surface have also been used as light pipes for illumination applications. The inner surfaces may be polished metal, or may be covered with a multilayer film that guides light by Bragg reflection (this is a special case of a photonic-crystal fiber). One can also use small prisms around the pipe which reflect light via total internal reflection [1]—such confinement is necessarily imperfect, however, since total internal reflection can never truly guide light within a lower-index core (in the prism case, some light leaks out at the prism corners).

An acoustic waveguide is a physical structure for guiding sound waves. A duct for sound propagation also behaves like a transmission line. The duct contains some medium, such as air, that supports sound propagation.