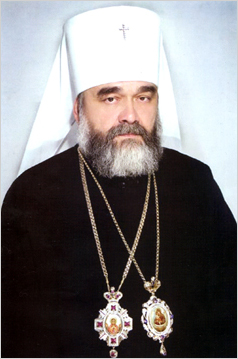 In 1981 he become a and was among the clergy of the and Ternopil diocese of the - .

In 1987 by the of his eparchial bishop, , Valeriy Kudryakov was from undertaking any church activity and performing any priestly function in public.

In 1989 the eparchial bishop lifted the ban and Valeriy Kudryakov again was among the clergy of the Lviv and Ternopil diocese.

In 1990 he joined the . Because of the action, there followed a decision of the of the Ukrainian Orthodox Church-Moscow Patriarchate, in which Valeriy Kudryakov was from undertaking any priestly duties and activities in that jurisdiction. He was later – excommunicated from the of the .

In 1995 he became a . His consecration was performed by and bishop Izyaslav of and .

In 1995-1998 he was the bishop of Khmelnitsk and Kamenets-Pdolsk, chancellor of the .

In 1998 he rejoined the . This church was resurrected at the end of the Soviet period by Metropolitan Ioann (Bodnarchuk) and .

In 1998, he was the vicar bishop titled bishop of Kremenetsk.

On he became of Ternopil and Podilsk and Locum Tenens of the of the .

On , - at the Church of the ,Metropolitan Mefodiy (Kudryakov) was elected Predsoyatel (} of the . He is the successor of .

As Father & Head of the UAOC worldwide, Mefodiy is Metropolitan of Kyiv & all Ukraine. Since his elevation, he has worked towards a more global visibility for the church, including a pastoral visit the United States in 2006 and travels to Western Europe. He has fostered continued positive relations with the Ukrainian government and other religious communities.

In 2005, Metropolitan Mefodiy pursued a legal suit which successfully restored the patriarchal chancery offices and the Church of Saint Demetrius of Thessaloniki to the UAOC. Located adjacent to the famous St. Michael's Golden-Domed Monastery, the premises had been in the use of a schismatic group.

Under the personal supervision of Metropolitan Mefodiy, the Ternopil Orthodox Theological Academy of the Ukrainian Autocephalous Orthodox Church was renovated and its course of studies completely updated to conform to contemporary academic standards. On October 18, 2008, the first diplomas of the newly-accredited theological school were awarded to qualified graduates in a ceremony in the Cathedral of the Nativity of Christ in Ternopil.

Through the efforts of Metropolitan Meofidy, the Patriarchal Cathedral of the UAOC, the historic Church of St. Andrew the First-Called in Kyiv was returned by the Ukrainian government to the legal possession of the UAOC on May 21, 2008. Prior to the transfer of the title to the UAOC Patriarchate, the church had been part of the historic reserve park "Sofia-Kyiv" while being used for services of the Ukrainian Autocephalous Orthodox Church