Route 1 is an important highway in the southern part of the Canadian province of New Brunswick. It begins in the west from the Canada-United States border at St. Stephen, and runs east for 231 kilometres (144 mi) to Route 2 at River Glade.

The eastern 155 km of Route 1 has been upgraded to a 4-lane controlled-access freeway (from Lepreau to River Glade). The remaining 86 km western portion of the highway running through Charlotte County is mostly 2-lane (non-divided) with a mixture of controlled and non-controlled access; this section is scheduled to be upgraded by 2013.

The majority of road development in New Brunswick follows settlement patterns which pre-dated motor transport, thus most communities developed along navigable waterways or were served by railways. The development of controlled access expressways only began in the 1960s and only around the largest communities. The majority of early provincial highway improvements merely consisted of upgrading local roads.

Route 1 initially followed local roads from St. Stephen eastward to Oak Bay where it swung south to the town of St. Andrews, then back north and east (still along local roads) until reaching Saint John where it followed Manawagonish Road through the former city of Lancaster and was later diverted to follow the "Golden Mile" immediately south of Manawagonish Road. It crossed the Saint John River at the Reversing Falls Bridge before proceeding on Douglas Avenue into the north end of the city. From there it went over to Rothesay Avenue and followed the shores of the Kennebecasis River up the valley to Sussex where it ended. 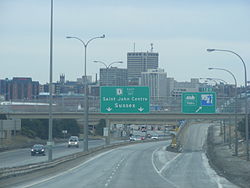 The Saint John Throughway, looking east towards the Harbour Bridge 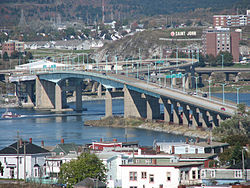 The earliest significant upgrade to this routing came in the late 1960s during an urban-renewal project in Saint John which saw the construction of a new highway (the Saint John Throughway) to bypass increased truck traffic around the city. Several alignment options were examined with the majority of citizens wanting the highway to go north of the city through the suburb of Millidgeville from where an easier crossing of the Reversing Falls gorge could be attempted.

However, the city, along with the provincial and federal governments, decided to bargain with the Canadian Pacific Railway (CPR) to purchase the majority of the Mill Street Yard near the neo-gothic Union Station for a highway alignment which would run through the middle of the city (somewhat like the infamous Interstate 93 alignment which was built through Boston).

The removal of the rail yard and historic station coincided with the federally-controlled National Harbours Board building the 4-lane Saint John Harbour Bridge downstream of the Reversing Falls which opened in 1968. Part of this deal involved the NHB collecting a 25¢ toll in each direction, however the toll cannot be raised without federal, provincial and municipal agreement, until 2007 when the toll was increased to 50¢. The new bridge also had the added effect of cutting the upper part of Saint John Harbour off from large ship traffic.

In a related project, in 1969, the federal and provincial governments worked with CPR to revamp the Saint John-Digby ferry service by building a new terminal in the city's west end, along with interchanges off the new expressway.

The Saint John Throughway only extended from Spruce Lake at Lorneville in the west, to where it met Rothesay Avenue in the east at Coldbrook but its construction coincided with the decline of rail traffic and rise of truck traffic and personal automobile travel. The Saint John area soon saw the growth of suburbs in the towns of Rothesay and Quispamsis in the Kennebecasis River valley, which were located just outside the Bay of Fundy's "fog belt."

In the 1970s, an extension to the throughway was built east from Rothesay Avenue to just past the town of Quispamsis where Route 1 reverted to local roads up the valley to Hampton and beyond. This controlled-access 2-lane section bypassing these towns was named the Mackay Highway, having been built through a stretch of timberland formerly owned by the locally prominent Mackay family.

In a new focus on improving arterial highways in the province, the provincial government during the 1960s-1980s undertook other improvements to Route 1, namely in building new sections (or designating existing sections) as controlled access. This resulted in the establishment of maximum speed limits of 100 km/h (65 mph) on these sections.

In the mid-1990s, a 2-lane bypass of Hampton was built up the Kennebecasis Valley from where the Mackay Highway ended, rejoining local roads at Norton. Another bypass was built from Oak Bay to Digdeguash to avoid the circuitous routing down the St. Andrews peninsula and through the town of the same name. Further 2-lane bypasses were built around St. George and on the outskirts of Sussex where an interchange with the Trans-Canada Highway was built.

The provincial government changed in 1987 with the election of Premier Frank McKenna who was focused on improving the province's business climate. One of the government's major tasks was to revamp provincial transportation infrastructure and McKenna entered into aggressive negotiations with the federal government of prime minister Brian Mulroney to secure federal funding of new highway projects. McKenna viewed the Trans-Canada and Route 1 in New Brunswick as being partially a federal responsibility since they funnelled the majority of Atlantic Canada's highway traffic to the U.S. and central Canada. The signing of the Canada-U.S. Free Trade Agreement in 1989, coupled with federal approval for numerous railway line abandonments in the Maritimes during the 1980s, led to predictions of further highway traffic growth on New Brunswick highways in the 1990s.

Under the remainder of the McKenna administration's years of power (until 1997), Route 1 saw 4-lane expansion and upgrading between Lorneville to Lepreau in the west and between Coldbrook and Apohaqui (near Sussex) in the east. A small 4-lane re-alignment was also built between St. George and Pennfield. The Trans-Canada Highway (Route 2) was also upgraded to 4-lanes between Penobsquis and Peticodiac.

Upgrades to Route 1 continued in the late 2000s, with a 4-lane section between St. Stephen and the Route 127 junction at Waweig opening to traffic in December 2008.[3] The St. Stephen Bypass, which had been partially open since 1993 as a 2-lane controlled access route to siphon traffic to the Milltown border crossing, was also upgraded and officially became part of Route 1 at this time. The bypass was completed in November 2009 with the opening of the International Avenue Bridge to Calais, Maine.[4]

It was announced on September 5, 2008 that the remaining stretch of Route 1 that connects to the United States will be twinned. The estimated cost will be $1.2 Billion (including maintenance and not accounting for inflation) with PPP Canada contributing half the cost of construction for an amount estimated to be about $290 million. Work is expected to be completed by July 2013.The project will be completed in much the same manner as the upgrade and realignment of the Trans-Canada Highway. A private consortium will be chosen through a tendering process, and they will be responsible for the design, and construction for the sections not yet upgraded to 4-lane status. After construction is completed the company formed by the consortium will be responsible for the maintenance of the highway from the US-Canada border crossing, to the interchange with Route 2 at River Glade, 15 km west of Moncton.

Construction on the final 4 lane sections of Highway 1 commenced in the spring of 2010 and is slated for completion in 2013.[5]

The final years of the McKenna administration saw an agreement signed with a private consortium called Maritime Road Development Corporation (led by former provincial Liberal leader and former federal Minister of Transport Douglas Young) to privately finance and build a toll highway to carry the Trans-Canada Highway (Route 2) in a new alignment from a point west of Fredericton to a point on the existing TCH west of Moncton at River Glade.

The toll issue was not without controversy as it led to the downfall of McKenna's successor, Camille Theriault in 1999 to PC leader Bernard Lord. The highway was built, but tolls were removed from most portions of the highway before they opened and this portion of the privately built (and owned) re-alignment of the Trans-Canada Highway has a hidden toll which is charged to the provincial government, thus motorists do not directly pay for their highway usage.

The new alignment of the Trans-Canada Highway opened in October, 2001 and at this time the portion of the old TCH which ran between River Glade and Sussex was re-designated as part of Route 1, extending the eastern terminus of this highway approximately 40 km (25 mi). Plans called for completion of a 4-lane bypass to replace the old TCH alignment around Sussex and construction took place from 2000–2004. A portion of the old TCH alignment from Sussex toward Fredericton has been re-designated as Route 10 and a re-aligned interchange has been built at Sussex. 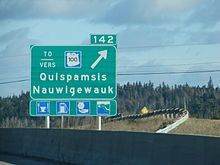 An experiment with Sunbury's new A-Train's led to the redesign of highway exit 119. Exit 119-B, west-bound, was widened to allow these longer transport truck configurations to navigate the exit. On the opposite side of the highway, the two east-bound on-ramps were combined into a wider single ramp, again to allow easier navigation for the longer transport trucks to navigate.

Construction is now underway along the Saint John Throughway on the "One Mile House" interchange.The name derives from the section of Saint John located along the railway 1 mile east of the former Union Station. The interchange will be one of the most expensive ever built in the province and is intended to route truck traffic away from the Uptown and straight to the industrial parks on the East Side. It will be located immediately east of the Crown Street exit and will consist of a fly-over ramp from the westbound lanes across the highway and adjacent CN Island Yard to connect with Rothesay Avenue and Russel Street.The interchange is expected to be completed by 2012.