Artaxerxes I, who died on December 25, 424 BC, was followed by his son Xerxes II. After a month and a half Xerxes II was murdered by his brother Secydianus or Sogdianus (the form of the name is uncertain). His illegitimate brother, Ochus, satrap of Hyrcania, rebelled against Sogdianus, and after a short fight killed him, and suppressed by treachery the attempt of his own brother Arsites to imitate his example. Ochus adopted the name Darius (Greek sources often call him Darius Nothos, "Bastard"). Neither the names Xerxes II nor Sogdianus occur in the dates of the numerous Babylonian tablets from Nippur; here effectively the reign of Darius II follows immediately after that of Artaxerxes I. 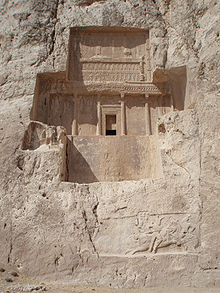 Prospective tomb of Darius II of Persia in Naqsh-e Rustam

Historians know very little about Darius II's reign. A rebellion by the Medes in 409 BC is mentioned by Xenophon. It does seem that Darius II was quite dependent on his wife Parysatis. In excerpts from Ctesias some harem intrigues are recorded, in which he played a disreputable part.

It is likely that Ezra and Nehemiah were alive during this monarch's reign, as it was approximately at this time that the new walls of Jerusalem, demolished during the Babylonian period, were rebuilt [2].

As long as the power of Athens remained intact he did not meddle in Greek affairs. When in 413 BC, Athens supported the rebel Amorges in Caria, Darius would not have responded had not the Athenian power been broken in the same year at Syracuse. As a result of that event, Darius II gave orders to his satraps in Asia Minor, Tissaphernes and Pharnabazus[disambiguation needed

], to send in the overdue tribute of the Greek towns and to begin a war with Athens. To support the war with Athens, the Persian satraps entered into an alliance with Sparta. In 408 BC he sent his son Cyrus to Asia Minor, to carry on the war with greater energy.

Darius II died in 405 BC, in the nineteenth year of his reign, and was followed as Persian king by Artaxerxes II.

By other wives
Artostes
The unnamed satrap of Media at 401 B.C.