Copper(II) sulfate, also known as cupric sulfate, is the chemical compound with the chemical formula CuSO4. This salt exists as a series of compounds that differ in their degree of hydration. The anhydrous form is a pale green or gray-white powder, whereas the pentahydrate (CuSO4·5H2O), the most commonly encountered salt, is bright blue. Copper sulfate exothermically dissolves in water to give the aquo complex [Cu(H2O)6]2+, which has octahedral molecular geometry and is paramagnetic. Other names for copper(II) sulfate are "blue vitriol" and "bluestone".[3] 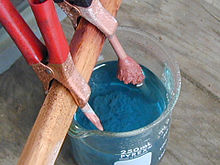 The anhydrous form occurs as a rare mineral known as chalcocyanite. The hydrated copper sulfate occurs in nature as chalcanthite (pentahydrate), and two more rare ones: bonattite (trihydrate) and boothite (heptahydrate).

At 650 °C, copper(II) sulfate decomposes into copper(II) oxide (CuO) and sulfur trioxide (SO3).

Its blue color is due to water of hydration. When heated in an open flame the crystals are dehydrated and turn grayish-white.[6]

Copper sulfate reacts with concentrated hydrochloric acid. In the reaction the blue solution of copper(II) turns green, due to the formation of tetrachlorocuprate(II):

As a herbicide, fungicide and pesticide

Copper sulfate pentahydrate is a fungicide.[7] However, some fungi are capable of adapting to elevated levels of copper ions.[8] Mixed with lime it is called Bordeaux mixture and used to control fungus on grapes, melons, and other berries.[9] Another application is Cheshunt compound, a mixture of copper sulfate and ammonium carbonate used in horticulture to prevent damping off in seedlings. Its use as a herbicide is not agricultural, but instead for control of invasive aquatic plants and the roots of plants near pipes containing water. It is used in swimming pools as an algaecide. A dilute solution of copper sulfate is used to treat aquarium fish for parasitic infections,[10] and is also used to remove snails from aquariums. Copper ions are highly toxic to fish, so care must be taken with the dosage. Most species of algae can be controlled with very low concentrations of copper sulfate. Copper sulfate inhibits growth of bacteria such as Escherichia coli.

For most of the twentieth century, chromated copper arsenate (CCA) was the dominant type of wood preservation for uses other than deep driven piles, utility poles, and railroad ties. To make pressure-treated wood, a large cylinder is filled with an aqueous chemical bath. Copper sulfate pentahydrate is dissolved in the water along with other additives prior to the lumber being placed inside the cylinder. When the cylinder is pressurized, the chemicals are absorbed by the wood, giving the wood fungicidal, insecticidal, and UV-light-reflecting properties that help preserve it.

Being a relatively benign and cheap reagent, copper(II) sulfate has attracted many niche applications over the centuries.

Copper sulfate is also used to test blood for anemia. The blood is tested by dropping it into a solution of copper sulfate of known specific gravity – blood which contains sufficient hemoglobin sinks rapidly due to its density, whereas blood which does not, floats or sinks less rapidly.[11]

In a flame test, its copper ions emit a deep blue-green light, much more blue than the flame test for barium.

Copper sulfate is a commonly included chemical in children's chemistry sets and is often used to grow crystals in schools and in copper plating experiments. Because of its toxicity, it is not recommended for small children. Copper sulfate is often used to demonstrate an exothermic reaction, in which steel wool or magnesium ribbon is placed in an aqueous solution of CuSO4. It is used in school chemistry courses to demonstrate the principle of mineral hydration. The pentahydrate form, which is blue, is heated, turning the copper sulfate into the anhydrous form which is white, while the water that was present in the pentahydrate form evaporates. When water is then added to the anhydrous compound, it turns back into the pentahydrate form, regaining its blue color, and is known as blue copperas.[15] Copper(II) sulfate pentahydrate can easily be produced by crystallization from solution as copper(II) sulfate is quite hydroscopic.

In an illustration of a "single metal replacement reaction," iron is submerged in a solution of copper sulfate. Upon standing, iron reacts, producing iron(II) sulfate, and copper precipitates. 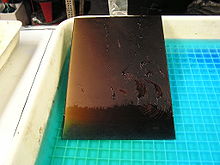 Lowering a zinc etching plate into the copper sulfate solution.

Copper sulfate was also used in the past as an emetic.[16] It is now considered too toxic for this use.[17] It is still listed as an antidote in the World Health Organization's ATC code V03.[18]

In 2008, the artist Roger Hiorns filled an abandoned waterproofed council flat in London with 75,000 liters of copper sulfate solution. The solution was left to crystallize for several weeks before the flat was drained, leaving crystal-covered walls, floors and ceilings. The work is titled Seizure.[19]

Copper sulfate is an irritant.[22] The usual routes by which humans can receive toxic exposure to copper sulfate are through eye or skin contact, as well as by inhaling powders and dusts.[23] Skin contact may result in itching or eczema.[24] Eye contact with copper sulfate can cause conjunctivitis, inflammation of the eyelid lining, ulceration, and clouding of the cornea.[25]

Upon acute oral exposure, copper sulfate is only moderately toxic.[26] According to studies, the lowest dose of copper sulfate that had a toxic impact on humans is 11 mg/kg.[27] Because of its irritating effect on the gastrointestinal tract, vomiting is automatically triggered in case of the ingestion of copper sulfate. However, if copper sulfate is retained in the stomach, the symptoms can be severe. After 1–12 grams of copper sulfate are swallowed, such poisoning signs may occur as a metallic taste in the mouth, burning pain in the chest, nausea, diarrhea, vomiting, headache, discontinued urination, which leads to yellowing of the skin. In case of copper sulfate poisoning, injury to the brain, stomach, liver, or kidneys may also occur.[25]