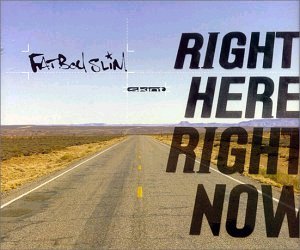 The basic string melody of the song was sampled from the song, "Ashes, The Rain & I".The lyrics 'right here right now' are a sample of Angela Bassett's voice from the film "Strange Days" at the 1:39:08 mark.

The of the single shows the process of over billions of years condensed into three and a half minutes. It starts with a single cell organism in the ocean evolving into a , a and then a predatory . It manages to eat a smaller fish before leaping up onto dry land. With a dinosaur visible in the background and an insect in front, it stays still for a few seconds before setting off and eating the insect.

The land-fish evolves into a small as it enters a forest. It sees a tall tree, which it climbs up. Its hands are visible evolving until it arrives at the top as a -like . It jumps from the tree into an icy landscape, enduring a as it evolves into a larger, -like ape. At the end of a large cliff, the ape beats its chest as the camera zooms out to show a massive desert.

The ape jumps onto the ground, where it has evolved into a primate resembling an . A large storm blows away much of its hair, turning it into a . The human runs much faster and puts on some and a . When fully clothed, it turns into a modern human with a beard. The man walks through a city environment and eats some food (taken from a cardboard cutout of Fatboy Slim himself), at which point he loses the beard and turns into the obese person from the cover of . He finally sits down on a bench at night, at which point the video ends.

* The album version is much longer than the single version due to the fact that an interlude set in the style of a radio request leads on the next song of the "You've Come a Long Way, Baby" album "", which was the second single released off that album.
* The music video starts with the time counter showing 350 billion years ago and counts in reverse to present day, however the actual age of the is closer to 13 billion years with starting on earth approximately 3.7 billion years ago.
*The main vocal hook from the b-side to the single, "Don't Forget Your Teeth," was later re-used for background vocals in "".
*The track should not be confused with the 1991 single by .
*"Right Here Right Now" was the also played during the opening ceremony of the 2007 Centenary World Scout Jamboree, at Hylands Park, Essex, UK.
*The song is mostly featured in climatic sequences like in the episode "" from "" and when showing "Special K" journey to becoming a "ladette" in "".
*It was featured in the trailer for the films "" and "Crank".
*It was used in a climax of a scene in the film "The Skulls".
*The song also appeared in the movie "".
*It was used in commercials for and Oldsmobile.
*It was the introduction song for the in .
*It was the opening music sequence for the pilot episode, "Welcome to Camelot", of NBC's crime drama "".