Mustamäe is one of the 8 administrative districts (Estonian: linnaosa) of Tallinn, the capital of Estonia. The smallest by area (it covers only 8.1 km²), it is at the same time the second largest district by population with 64,450 inhabitants (as of 1 June 2010)[1]. It is located 5 km from the centre of Tallinn and is bordered by districts Haabersti, Nõmme, and Kristiine. Local housing is mostly represented by 5-9 stories high panel blocks of flats, built in the 1960–1970s. Mustamäe is usually referred to as a bedroom community. 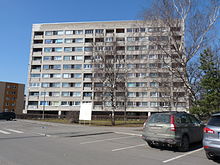 Established in 1962 and completed in 1973 as a microdistrict, Mustamäe was Tallinn's first large district. Similar districts, Õismäe and Lasnamäe were completed later.

View of Mustamäe from Nõmme 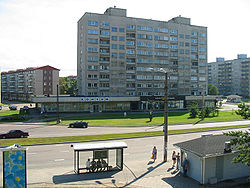 Mustamäe is connected to the rest of Tallinn via three main streets: Mustamäe tee and Sõpruse puiestee lead to the centre of Tallinn, and Ehitajate tee crosses Mustamäe while connecting Nõmme and Õismäe. Other major streets include: A. H. Tammsaare tee, Kadaka tee, Ed. Vilde tee, and Akadeemia tee. Most of the public transportation operates on these streets. Mustamäe is serviced by buses and trolleybuses. Out the 8 trolleybus lines of Tallinn, 6 operate (partly) in Mustamäe.