The Park Estate is a 150-acre (0.61 km2) private residential area to the west of the centre of Nottingham, England, that was built in what was once the deer park of Nottingham Castle. 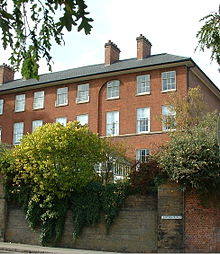 The first domestic building in the park was built opposite the castle gatehouse in 1809 as the vicarage to St. Mary's Church

Major development began in the 1820s under the fourth Duke of Newcastle, despite much opposition from locals, who regarded the area as public land. Development continued under the Fifth Duke, Henry Pelham Clinton, who appointed Thomas Chambers Hine, the city's finest architect, to design the great houses. Today, the Park Estate is one of the most remarkable residential estates in the whole of the United Kingdom, and although many of the huge Victorian Gothic mansions have been converted into flats, it retains much of its original character, including the original gas lighting network believed to be one of the largest in Europe (after Berlin).

In 1938, the 8th Duke of Newcastle sold The Park to Oxford University. In 1986 negotiations between The Park Residents Association and Oxford University Chest resulted in the ownership of the Estate, together with the rights and responsibilities that went with that ownership, being transferred to the newly formed Company limited by guarantee, The Nottingham Park Estate Limited, formed by residents of the Estate. 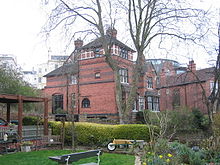 View of 39 Newcastle Drive from Tattersall Drive. Built in 1886 by local architect Fothergill Watson. Typical of the large houses built in this city centre estate.

Access to the estate for vehicles is restricted to three main entrances - North Road (off Derby Road), Lenton Road (next to castle) and Peveril Drive (off Castle Boulevard) where a key card is required to operate the rising bollards. There are also two minor entrances - Barrack Lane (off Derby Road) and Newcastle Drive/Park Row (off The Ropewalk)- that provide access to selected parts of the estate (with a somewhat circuitous route to the rest of the estate), although Barrack Lane itself does not fall within The Park.

There are several pedestrian/cycle entrances which are mostly gated, of which two are regularly locked at night. These are: Lenton Road (on to Park Road, Lenton); Lenton Road (next to Rock Drive: a steep walkway to Castle Boulevard); Fish Pond Drive (on to Castle Boulevard); Newcastle Drive (off Canning Circus) and The Park Tunnel which runs from Tunnel Road to Derby Road (near Budgens store) with a stair case half way along to Upper College Street. There is a gated walkway from Pelham Crescent to Harlaxton Drive, Lenton which is currently locked from 11pm to 5am.

As of September 2009 the pedestrian gate between Lenton Road & Park Road, Lenton has been locked between the hours of 11pm and 5am. A security guard is on duty during that period to prevent anyone climbing over the gate and to redirect pedestrians. Previous to the locking, the gate was upgraded with taller metal spikes and a keyless locking system. The locking is being trialled in an attempt to reduce late night noise and anti-social behaviour taking place along Lenton Road which links student dominated Lenton to the city centre.

Living on the estate incurs a charge ('Park Rates'), which covers maintenance of roads, pavements and gas light network. The rates also go towards maintaining the many trees and public parks. Residents previously received a reduced council tax bill due to these rates covering services usually provided by the council, however now the Park Estate rate is paid in addition to council tax.