Blizzard Entertainment, Inc. is an American video game developer and publisher founded on February 8, 1991 under the name Silicon & Synapse by three graduates of UCLA,[3] Michael Morhaime, Allen Adham and Frank Pearce and currently owned by French company Activision Blizzard. Based in Irvine, California, the company originally concentrated primarily on the creation of game ports for other studios before beginning development of their own software in 1993 with the development of games like Rock N' Roll Racing and The Lost Vikings. In 1994 the company became Blizzard Entertainment Inc before being acquired by distributor Davidson & Associates and later by Vivendi. Shortly thereafter, Blizzard shipped their breakthrough hit Warcraft: Orcs and Humans. Blizzard went on to create several successful PC games, including the Warcraft, Starcraft and Diablo series, and the MMORPG World of Warcraft.

On July 9, 2008, Activision officially merged with Vivendi Games, culminating in the inclusion of the Blizzard brand name in the title of the resulting holding company, though Blizzard Entertainment remains a separate entity with independent management.[4] Blizzard Entertainment offers events to meet players and to announce games: the BlizzCon in California, United States, and the Blizzard Worldwide Invitational in other countries, such as Paris, France and Seoul, South Korea. 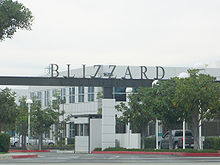 Blizzard Entertainment was founded by Michael Morhaime, Allen Adham, and Frank Pearce as Silicon & Synapse in February 1991, a year after[3] all three had received their bachelor's degrees from UCLA.[3][5] In the early days the company focused on creating game ports for other studios. Ports include titles such as J.R.R. Tolkien's The Lord of the Rings, Vol. I and Battle Chess II: Chinese Chess.[6][7] In 1993, the company developed games like Rock N' Roll Racing and The Lost Vikings (published by Interplay Productions).

In early 1994 they were acquired by distributor Davidson & Associates for $6.75 million.[8] The same year the company briefly changed its name to Chaos Studios, before finally settling on Blizzard Entertainment after it was discovered that another company with the Chaos name already existed.[9] Shortly thereafter, Blizzard shipped their breakthrough hit Warcraft: Orcs and Humans .

Blizzard has changed hands several times since then: Davidson was acquired along with Sierra On-Line by a company called CUC International in 1996; CUC then merged with a hotel, real-estate, and car-rental franchiser called HFS Corporation to form Cendant in 1997. In 1998 it became apparent that CUC had engaged in accounting fraud for years before the merger; Cendant's stock lost 80% of its value over the next six months in the ensuing widely discussed accounting scandal. The company sold its consumer software operations, Sierra On-line which included Blizzard, to French publisher Havas in 1998, the same year Havas was purchased by Vivendi. Blizzard was part of the Vivendi Games group of Vivendi. In July 2008 Vivendi Games merged with Activision, using Blizzard's name in the resulting company, Activision Blizzard.

In 1996, Blizzard acquired Condor Games, which had been working on the game Diablo for Blizzard at the time. Condor was renamed Blizzard North, and has since developed hit games Diablo, Diablo II, and its expansion pack Diablo II: Lord of Destruction. Blizzard North was located in San Mateo, California; the company originated in Redwood City, California.

Blizzard launched their online gaming service Battle.net in January 1997 with the release of their action-RPG Diablo. In 2002, Blizzard was able to reacquire rights for three of its earlier Silicon & Synapse titles from Interplay Entertainment and re-release them under Game Boy Advance.[10] In 2004, Blizzard opened European offices in the Paris suburb of Vélizy, Yvelines, France, responsible for the European in-game support of World of Warcraft. On November 23, 2004, Blizzard released World of Warcraft, its MMORPG offering. On May 16, 2005, Blizzard announced the acquisition of Swingin' Ape Studios, a console game developer which had been developing StarCraft: Ghost. The company was then merged into Blizzard's other teams after StarCraft: Ghost was 'postponed indefinitely'. On August 1, 2005, Blizzard announced the consolidation of Blizzard North into the headquarters at 131 Theory in UC Irvine's University Research Park in Irvine, California. In 2008, Blizzard moved their headquarters to 16215 Alton Parkway in Irvine, California.

World of Warcraft was the fourth released game set in the fantasy Warcraft universe, which was first introduced by Warcraft: Orcs & Humans in 1994.[11] Blizzard announced World of Warcraft on September 2, 2001.[12] The game was released on November 23, 2004, on the 10th anniversary of the Warcraft franchise.

With more than 12 million monthly subscriptions in October 2010,[19][20] World of Warcraft is currently the world's most-subscribed MMORPG,[14][21][22] and holds the Guinness World Record for the most popular MMORPG by subscribers.[23][24][25][26] In April 2008, World of Warcraft was estimated to hold 62 percent of the MMORPG subscription market.[27] In 2008, Blizzard was honored at the 59th Annual Technology & Engineering Emmy Awards for the creation of World of Warcraft. Mike Morhaime accepted the award.

Notable unreleased titles include Warcraft Adventures: Lord of the Clans, which was cancelled on May 22, 1998, Shattered Nations, and Starcraft: Ghost, which was "Postponed indefinitely" on March 24, 2006 after being in development hell for much of its lifespan, and whose current status is in question. The company also has a history of declining to set release dates, choosing to instead take as much time as needed, generally saying a given product is "done when it's done."[32]

Pax Imperia II was originally announced as a title to be published by Blizzard. Blizzard eventually dropped Pax Imperia II, though, when it decided it might be in conflict with their other space strategy project, today known as StarCraft. THQ eventually contracted with Heliotrope and released the game in 1997 as Pax Imperia: Eminent Domain.

Blizzard Entertainment has announced that they will be producing a Warcraft live-action movie. The movie will be released by Legendary Pictures.[33] They have recently announced that director Sam Raimi has agreed to direct the upcoming movie.

On July 6, 2010 Blizzard announced that they were changing the way their forums worked to require that users identify themselves with their real name.[34][35] The reaction from the community was overwhelmingly negative with multiple game magazines calling the change "foolhardy"[36] and an "Epic Fail".[37] It also resulted in the largest user response ever on the Blizzard forums.[38][39][40][41][42] This included personal details of a Blizzard employee who gave his real name "to show it wasn't a big deal".[43] Shortly after revealing his real name, personal information was posted including his phone number, picture, age, and home address.[38]

Some technology media outlets suggested that displaying real names through Real ID is a good idea and would benefit both Battle.net and the Blizzard community.[44] But others were worried that Blizzard were opening their fans up to real-life dangers[45] such as stalking, sexual predators, and employment issues, since a simple Google search by your employer will reveal your online activities.[38][46][47][48]

Blizzard initially responded to some of the concerns by saying that the changes would not be retroactive to previous posts, that parents could set up the system so that minors cannot post, and that posting to the forums is optional.[49] However due to the huge negative response, Blizzard President Michael Morhaime issued a statement rescinding the plan to use real names on Blizzard's forums for the time being.[50]

Blizzard has made use of a special form of software known as the 'Warden Client'. The Warden client is known to be used with Blizzard's Online Games such as Diablo and World of Warcraft, and the Terms of Service contain a clause consenting to the Warden software's RAM scans while a Blizzard game is running.[51]

The Warden client scans a small portion of the code segment of running processes in order to determine whether any third-party programs are running. The goal of this is to detect and address players who may be attempting to run unsigned code or third party programs in the game. This determination of third party programs is made by hashing the scanned strings and comparing the hashed value to a list of hashes assumed to correspond to banned third party programs.[52] The Warden scans all processes running on a computer, not just the World of Warcraft game, and could possibly run across what would be considered private information and other personally identifiable information. It is because of these peripheral scans that Warden has been accused of being spyware and has run afoul of controversy among privacy advocates.[53][54][55]

The Warden's reliability in correctly discerning legitimate vs illegitimate actions was called into question when a large scale incident happened when many Linux users were banned after an update to Warden caused it to incorrectly detect Cedega as a cheat program.[56] Blizzard issued a statement claiming they had correctly identified and restored all accounts and credited them with 20 days play.[57]

On June 20, 2003, Blizzard issued a cease and desist letter to the developers of an open source clone of the Warcraft engine called FreeCraft, claiming trademark infringement. This hobby project had the same gameplay and characters as Warcraft II, but came with different graphics and music.

As well as a similar name, FreeCraft enabled gamers to use Warcraft II graphics, provided they had the Warcraft II CD. The programmers of the clone shut down their site without challenge. Soon after that the developers regrouped to continue the work by the name of Stratagus.[59]

On December 5, 2008, Blizzard issued a cease and desist letter to many administrators of high population World of Warcraft private servers (essentially slightly altered hosting servers of the actual World of Warcraft game, that players do not have to pay for). Blizzard used the Digital Millennium Copyright Act to influence many private servers to fully shut down and cease to exist.[60] In 2008 a private server by the name of ChaosCrusade was served with a DMCA notification.[61]

On July 14, 2008, the U.S. District of Arizona ruled on the case MDY Industries, LLC v. Blizzard Entertainment, Inc. The Court found that MDY was liable for copyright infringement since users of its Glider bot program were breaking the End User License Agreement and Terms of Use for World of Warcraft. MDY Industries appealed the judgment of the district court, and a judgment was delivered by the Ninth Circuit Court of Appeals on December 14, 2010, in which the summary judgment against MDY for contributory copyright infringement was reversed.[63][64] Nevertheless, they ruled that the bot violated the DMCA and the case was sent back to the district court for review in light of this decision.[65][66]

Blizzard released its revamped Battle.net service in 2009. This service allows people who have purchased Blizzard products (StarCraft, StarCraft II, Diablo II, and Warcraft III, as well as their expansions) to download digital copies of games they have purchased, without needing any physical media. In the future, it will store a player's "Blizzard Level" (similar to a Gamerscore).[67]

On November 11, 2009, Blizzard required all World of Warcraft accounts to switch over to Battle.net Accounts. This transition now means that all current Blizzard titles can be accessed, downloaded, and played with a singular Battle.net login.[68]

Over the years, some former Blizzard employees have moved on and established gaming companies of their own: