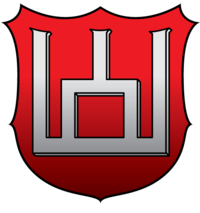 Columns of Gediminas, symbol of the Gediminids. 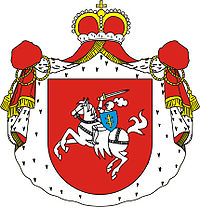 Medieval Coat of Arms of Lithuania was adopted by influential families 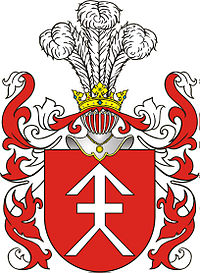 Coat of arms with crossed arrows come from ancient times, like Kościesza coat of arms

The Lithuanian nobility was historically a legally privileged class in the Grand Duchy of Lithuania consisting of Lithuanians, from the historical regions of Lithuania Proper and Samogitia, and, following Lithuania's eastern expansion, many Ruthenian noble families (boyars).[1] Families were primarily granted privileges for their military service to the Grand Duchy. After the Union of Lublin in 1569, Lithuanian nobility became less distinguishable from Polish szlachta, although it preserved Lithuanian national awareness. The Polish-Lithuanian Commonwealth had one of the largest number of nobility in Europe, close to 10% of the population, in some regions, like Samogitia, it was closer to 12%.

In the Grand Duchy of Lithuania

Prior to the creation of the Lithuanian state by Mindaugas, lesser members of the nobility were called bajorai (singular - bajoras) and greater nobles, kunigai (singular - kunigas), from the Old German: kunig, meaning "king", or Lithuanian: kunigaikštis, usually translated as duke, Latin: dux. They evolved from tribal leaders, and were chiefly responsible for waging wars and organizing raids operations into enemy's territory. After the establishment of a unified state they gradually became subordinates to greater Dukes, and later to the King of Lithuania. After Mindaugas' death all Lithuanian rulers held the title Grand Duke (Lithuanian: Didysis kunigaikštis), or king (rex which was used in Gediminas' title).

Ethnic Lithuanian nobility had different names than common people, as their names were made of two stems. Greater noble families generally used the Lithuanian pagan given names of their precursors as their family names; this was the case with Goštautai, Radvilos, Astikai, Kęsgailos and others. Those families acquired great wealth and evolved into magnates. Their representatives are respectively Jonas Goštautas, Radvila Astikas, Kristinas Astikas and Mykolas Kęsgaila. Those families were granted coats of arms under the Union of Horodlo in 1413.

While at the beginning the nobility was almost all Lithuanian, with territorial expansion more Ruthenian families joined Lithuanian nobility. Already in the 16th century several Ruthenian noble families began to call themselves gente Ruthenus, natione Lithuanus.[2] A good example is the Chodkiewicz family, that claimed its ancestry from the House of Gediminas.

According to a military census in 1528, ethnic Lithuanian lands had 5730 horsemen and Ruthenian lands of the Grand Duchy – 5372.[3]

In the late 14th century Grand Dukes Jogaila and Skirgaila began forming professional forces. Instead of calling all men to war, a class of professional warriors – bajorai (future nobles) – was formed. In the early 15th century, Vytautas the Great reformed the army of the Grand Duchy of Lithuania further: as there were not enough warriors, Vytautas relieved soldiers from taxes and labour on the land by granting them veldamai status, a class of dependent peasants.[4] At first the land was given to the serving men until death (benefice), but during the 14th and 15th centuries most of it became patrimony, granted by privileges of the monarch. Whilst during the 14th century the Grand Duke owned about ⅔ of the Duchy's land, by 1569 he was a direct owner of only ⅓.

In the 15th century, the noble social class was already formed in Lithuania; for quite a long time it remained open and anyone could be ennobled for services to the Grand Duke. In time, the influence of lesser nobles decreased and greater nobles acquired increasingly more power, especially during the interregnum fights following Vytautas' death.

Wealthier families were distinct from other nobles because they had latifundia in different lands including Lithuanian, Ruthenian and even Polish. In the 15th century, the biggest landowners began to call themselves "lords" (ponai or didikai), and the Lithuanian Council of Lords was established to represent their interests. In time most of them received titles borrowed from the Holy Roman Empire – dukes, earls and others. Grand Duchy of Lithuania offices were held almost exclusively by magnates.

The Grand Duke became dependent on powerful landowners after he distributed state land, after which time landowners demanded greater liberties and privileges. The nobles were granted administrative and judicial power in their domains and increasing rights in state politics. The legal status of the nobility was based on several privileges, granted by the Grand Dukes:

Most of the nobility rights were retained even after the third partition of the Polish–Lithuanian Commonwealth in 1795.

Ties to the Kingdom of Poland

At first only Lithuanian magnate families were affected by Polonization, although many of them like the Radziwiłłs remained loyal to the Grand Duchy of Lithuania and safeguarded its sovereignty vis-à-vis the Kingdom of Poland. Gradually Polonization spread to wider population, and for the most part Lithuanian nobility became part of both nations’ szlachta.

Lithuanian language was used during Kościuszko Uprising in the proclamations calling to rise up For our freedom and yours. And Lithuania nobles did rise to fight for independence of their nation.

After partitions of the Polish–Lithuanian Commonwealth

The lesser Lithuanian nobility, still preserving the Lithuanian language[citation needed], suffered after the partitions of the Commonwealth left most of the former Grand Duchy under control of the Russian Empire. The situation worsened during the rule of tzar Nicholas I of Russia. After the November uprising imperial officials wanted to minimize the social base for another potential uprising and thus decided to reduce the noble class. During the period of 1833–1860, 25,692 people in Vilna Governorate and 17,032 people in Kovno Governorate lost their noble status. They could not prove their status with monarchs' privileges or land ownership.[8] They did not lose personal freedom, but were assigned as one steaders Russian: однодворцы in rural areas and as citizens in towns.

Following the January Uprising imperial officials announced that "Lithuanians are Russians seduced by Poles and Christianity" and banned press in the Lithuanian language and started the Program of Restoration of Russian Beginnings.

During the 19th century a Latin formula gente Lithuanus, natione Polonus (Lithuanian people, Polish nation) was common[citation needed] in the Lithuania Proper and former Samogitian Eldership. With Polish culture becoming one of the primary centers of resistance to the Russian Empire, Polonization in some regions actually strengthened in response to official policies of Russification. Even larger percentage of Lithuanian nobility was Polonised and adopted Polish identity by the late 19th century. A Russian census in 1897 showed that 27.7 % of nobility living within modern Lithuania's borders declared Lithuanian as a mother language.[9][10] This number was even higher in Kovno Governorate, where 36.6 % of nobility identified the Lithuanian language as their mother language.[9]

The processes of Polonization and Russification were partially reversed with the Lithuanian National Revival, which also began around that time. Although originating mostly from the non-noble classes, a number of nobles re-embraced their Lithuanian roots.

During the interbellum years the government of Lithuania issued land reform limiting manors with 150 hectares of land, and confiscating land from those nobles who were fighting in the Polish-Lithuanian War on the Polish side. Many members of the Lithuanian nobility during the interbellum and after the World War II emigrated to Poland, many were deported to Siberia during the years 1945–53 of Soviet occupation, many manors were destroyed. Association of Lithuanian Nobility was established in 1994.