"Over the Rainbow" (often referred to as "Somewhere Over the Rainbow") is a classic Academy Award-winning ballad song with music by Harold Arlen and lyrics by E.Y. Harburg.[1] It was written for the movie The Wizard of Oz, and was sung by Judy Garland in the movie.[1] Over time it would become Garland's signature song.

In the film, part of the song is played by the MGM orchestra over the opening credits. About five minutes later, Garland, in the role of Dorothy Gale, sings "Over the Rainbow" after unsuccessfully trying to get her aunt and uncle to listen to her regarding an unpleasant incident involving Dorothy's dog Toto and the nasty spinster Miss Gulch (Margaret Hamilton). Dorothy's Aunt Em tells her to "find yourself a place where you won't get into any trouble", prompting Dorothy to walk off by herself. She muses to Toto "Someplace where there isn't any trouble. Do you suppose there is such a place, Toto? There must be. It's not a place you can get to by a boat, or a train. It's far, far away. Behind the moon, beyond the rain.....", commencing with singing the song. The famous sequence itself, as well as the entirety of the Kansas scenes, was directed (though uncredited) by King Vidor.

The song is number one of the "Songs of the Century" list compiled by the Recording Industry Association of America and the National Endowment for the Arts. The American Film Institute also ranked "Over the Rainbow" the greatest movie song of all time on the list of "AFI's 100 Years...100 Songs". It was adopted (along with Irving Berlin's "White Christmas") by American troops in Europe in World War II as a symbol of the United States--in fact, Garland even performed the song for American troops as part of a 1943 command performance.

In April 2005, the United States Postal Service issued a commemorative stamp recognizing lyricist Yip Harburg's accomplishments. The stamp pictures the opening lyric from "Over the Rainbow".

The Wizard of Oz 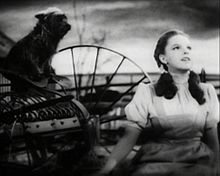 Judy Garland performing the song in the 1939 feature film, The Wizard of Oz.

The song was initially deleted from the film after a preview in San Luis Obispo, because MGM chief executive Louis B. Mayer and producer Mervyn LeRoy thought the song "slowed down the picture" and that "the song sounds like something for Jeanette MacDonald, not for a little girl singing in a barnyard". The persistence of associate producer Arthur Freed and Garland's vocal coach/mentor Roger Edens to keep the song in the picture paid off.[2]

A reprise of the song was deleted after being filmed. An additional chorus was to be sung by Dorothy while she was locked in a room in the witch's castle, helplessly awaiting death as the witch's hourglass ran out. However, although the visual portion of that reprise is presumably lost, the soundtrack of it survives and was included in the 2-CD Deluxe Edition of the film's soundtrack, released by Rhino Entertainment. In that extremely intense and fear-filled rendition, Dorothy weeps her way through it, unable to finish, concluding with a tear-filled, "I'm frightened, Auntie Em – I'm frightened!" This phrase was retained in the film and is followed immediately by Aunt Em's brief appearance in the witch's crystal, where she is soon replaced by the visage of the witch, mocking and taunting Dorothy before turning toward the camera to cackle.

Judy Garland first pre-recorded the song on the MGM soundstages on October 7, 1938, using an arrangement by Murray Cutter. A studio recording of the song, not from the actual film soundtrack, was recorded and released as a single by Decca Records in September 1939. In March 1940, that same recording was included on a Decca 78-RPM four-record studio cast album entitled "The Wizard of Oz". Even though this is not the version of the song featured in the film, Decca would continue to re-release the so-called "Cast Album" well into the 1960s after it was re-issued as a single-record 33 1/3 RPM LP. Garland always performed the song without altering it, singing exactly as she did for the movie. She explained her fidelity by saying that she was staying true to the character of Dorothy and to the message of really being somewhere over the rainbow.[3]

It was not until 1956, when MGM released the true soundtrack album from the film, that the film version of the song was made available to the public. The 1956 soundtrack release was timed to coincide with the television premiere of the movie.[4] The soundtrack version has been re-released several times over the years, including in a "Deluxe Edition" from Rhino Records in 1995.[5]

At the time of Garland's original release, hers was initially not the most commonly played version in jukeboxes, where versions by dance bands such as Bob Crosby and Glenn Miller's predominated, however, 'Over the Rainbow' would eventually become the signature song most closely identified with Garland and she would perform it for the next thirty years, until her death in 1969. In a letter to Harold Arlen, Garland wrote:

"'Over the Rainbow' has become part of my life. It's so symbolic of everybody's dreams and wishes that I'm sure that's why some people get tears in their eyes when they hear it. I've sung it thousands of times and it's still the song that's closest to my heart."[6]

An introductory verse that was not used in the movie is often used in theatrical productions of The Wizard of Oz and is included in the piano sheet music book of songs from the film.It was also used in renditions by Frank Sinatra, Doris Day, Tony Bennett, Ella Fitzgerald and Sarah Vaughan (among others). Garland herself sang the introductory verse only once, on a 1948 radio broadcast of The Louella Parsons Show. [7] A second bridge is also used occasionally in theatrical productions.

The short reprise, deleted from the final cut of the film, uses the melody of the bridge (or "B" section).

Other charting or significant versions

Israel Kamakawiwoʻole's album Facing Future, released in 1993, included a ukulele medley of "Over the Rainbow" and "What a Wonderful World". The song reached #12 on Billboard's Hot Digital Tracks chart the week of January 31, 2004 (for the survey week ending January 18, 2004). [10] In the UK the song was released as a single under the title "Somewhere Over the Rainbow". It entered the UK Official Singles Chart in April 2007 at #68. After several returns to the chart, in September 2008 it reached its peak position so far going up to #46.[citation needed] In Germany, the single also returned to the German Singles Chart in September 2010. After only 2 weeks on that chart, the song already received gold for 150,000 copies sold.[11] In October 2010 the song reached No. 1 in the German charts and in February, 2011 it has been certified 2x Platinum for selling more than 600,000 copies.[11] It stayed 12 non-consecutive weeks at the top spot and was the most successful single in Germany in 2010.[12] In France, the song debuted at #4 in December 2010 and reached number one.[13] In the USA, the song was certified Platinum for 1,000,000 downloads sold.[14] In Switzerland, the song received Platinum, too, for 30,000 copies sold.[15]

This version has been used in several commercials, films and television programs including Finding Forrester, Meet Joe Black, 50 First Dates, Snakes on a Plane, South Pacific, Cold Case, ER, Life on Mars and Horizon. The Kamakawiwoʻole version of the song was covered by the cast of Glee on the season one finale "Journey", and included on the extended play Glee: The Music, Journey to Regionals, charting at number 30 in the UK, 31 in Canada and Ireland, 42 in Australia, and 43 in the US.[16][17][18][19][20][21][22]

Eva Cassidy recorded a version of the song for the 1992 Chuck Brown/Eva Cassidy album The Other Side. After Cassidy's death in 1996, the song was included in her posthumously-released compilation album Songbird, released in 1998 and was released as a CD single in 2001. This version was popularised by the BBC on BBC Radio 2 and on the television show Top of the Pops 2, the latter of which featured a video recording of Cassidy performing the song. This publicity helped push sales of the compilation album Songbird to #1 in the UK charts. Eva Cassidy's unique rendition of "Over the Rainbow" was selected by the BBC in the UK for their "Songs of the Century" album in the year 1999. Cassidy's performance of "Over the Rainbow" at Blues Alley was published for the first time in January 2011 on her Simply Eva album.

During her treatment and recovery from breast cancer, Australian recording artist Kylie Minogue released a live cover version of the song. The song's audio was taken directly from Minogue's live DVD Kylie Showgirl, filmed on 6 May 2005 at Earls Court Exhibition Centre.[24][25] Released on 25 December 2005, it was her first single to be released by digital means only.[24] The release was joined by her cover of "Santa Baby" as a B-side.[26]

Danielle Hope, the winner of the Wizard of Oz-themed BBC talent show Over the Rainbow released a cover version of the song. The song was released by digital download on 23 May 2010 and a CD single was released on 31 May 2010.[27] As the song was recorded before a winner was announced, runners-up Lauren Samuels and Sophie Evans also recorded versions of the song. These were both later made available for download on 6 June 2010. All three finalists appeared on the CD single's B-side: a Wizard of Oz medley.[27]

The single was a charity record, raising money for both the BBC Performing Arts Fund and Prostate UK.[28]