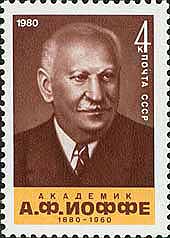 In the course of his career, Ioffe researched , , features of s, physics of high impact, , , and was a leading force in building new research laboratories for , , and . Many of these laboratories later became independent institutes.

Ioffe's pedagogical efforts resulted in the Soviet school of physics, his students include Aleksandr Aleksandrov, , , , , , , and others.

Ioffe was born into a middle-class ish family in small town of , (now in , ). After graduating from in 1902, he spent two years as an assistant to in his laboratory. Ioffe completed his Ph.D. at in 1905. This same year Ioffe stated he saw the names of two authors, Einstein – Marić, on the "Annus Mirabilis papers" when they were submitted. This lends support to the claim that the work was a co-authorship between Einstein and his wife, though most historians of science do not think this is so. ["Einstein's Wife : [http://www.pbs.org/opb/einsteinswife/science/mquest.htm The Mileva Question] ". Oregon Public Broadcasting, 2003]

After 1906 Ioffe worked in the (from 1924 Leningrad) Polytechnical Institute where he eventually became a professor. In 1911 Ioffe converted to in order to marry a non-Jew.

Ioffe refused a job offer of directing the Soviet project to build the on account of being too old. He saw great promise in the young , and in 1942 placed him in charge of the first nuclear laboratory. During 's campaign against the so-called "s" (Jews), in 1950 Ioffe was made redundant from his position of the Director of Institute and from the Board of Directors. In 1952-1954 he headed the Laboratory of Semiconductors of Academy of Sciences of the USSR, which in 1954 was reorganized into Institute of Semiconductors.

Ioffe attained a US Patent on the piezoelectric effect.