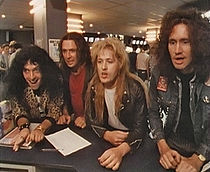 Bad News made their television debut during 1983, in the first series of The Comic Strip Presents... (written by Edmondson, and produced by Michael White/Comic Strip Productions). The episode, Bad News Tour, took the form of a satirical fly-on-the-wall rockumentary, in which the incompetent band is followed travelling to a gig in Grantham by an almost equally inept documentary film crew. Coincidentally, it was in production at the same time as This Is Spinal Tap, which was released the following year to a much wider audience and subsequently greater acclaim. The episode is notable for featuring songs (written by Edmondson and Simon Brint) that do not appear on either of the Bad News albums or in the later TV episode. These rare tunes are 'Bad News' (Version 1), 'The Motorbike Song' (aka 'Doing A Turn Down The Highway'), a brief snippet of a song whose title is unknown, and an almost complete live version of 'Mr Rock N Roll'. These tunes represent the only released Bad News material not (co)produced by Queen guitarist Brian May.

The band continued to tour throughout most of the decade and released an eponymously titled album, consisting of thrashy rock songs punctuated by frequent squabbling amongst the band's members. Brian May produced the record, which included a cover of Queen's "Bohemian Rhapsody". That track peaked at #44 in the UK Singles Chart in September 1987.[1]

Perhaps their most memorable appearance was when they were invited to play at the Monsters of Rock festival at Castle Donington in 1986. This performance was the centre piece of a second follow up Comic Strip episode, More Bad News broadcast again by Channel 4 in 1988. A feature of the band's onstage antics that day, omitted from the final cut, was an interesting method of coping with the crowd's plastic (and often urine-filled) bottle barrage, which was then a traditional (if somewhat awkward) welcome for bands playing at the Donington festival in those days. Before the performance began proper, the band spent time just running around on stage dodging missiles, with Mayall using his guitar as a bat in an attempt to return some. They also played a low-key London show at the Marquee Club, with guest appearances by Jeff Beck and Brian May.