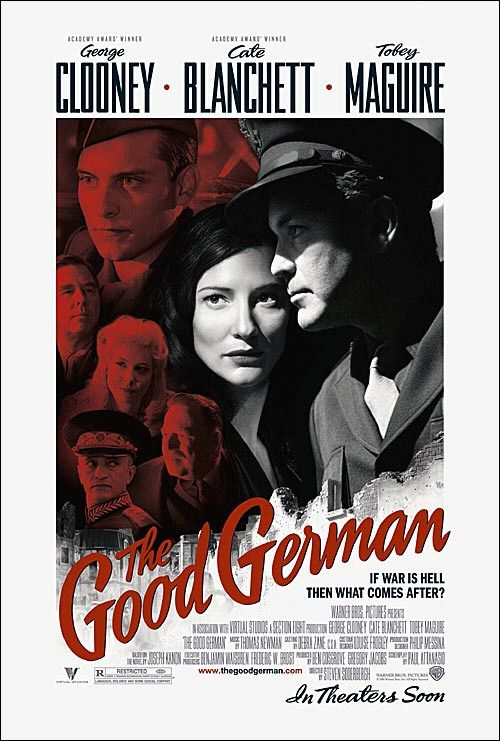 "The Good German" is a 2006 feature film adaptation of the novel by . It was directed by , and stars , , and . Set in following the Allied victory over the Nazis, it begins as a murder mystery, but weaves in elements hinting at 's origins and the American postwar employment of Nazi rocket scientists in .

The film was shot on (not ) and is designed to imitate the appearance of from the 1940s, although it also includes material - such as sex scenes and swearing - that would have been prohibited by the . Its poster is a to the poster for the classic film "Casablanca" (also a film), as is the closing scene at an airport. The DVD release even presents the film in the outdated 4:3 aspect ratio that was normal for 1940s films, though the theatrical release used slightly more modern but still unusual 1.66:1 ratio.

The film's title alludes to the notion of "a good German", one who ostensibly was not to blame for allowing to do the evil that he did, and who did not see the as it occurred before his eyes. Thematically, the film centers on guilt, and whether it is possible to survive the atrocities while being unaware of and uncomplicit of them.

Jacob "Jake" Geismar (played by ), an American , returns to during the Potsdam negotiations between the Allied powers after World War II was over in Europe (ml|1945|May|May 1945) but before hostilities ended in Asia (ml|1945|August|August 1945). Jacob witnesses his murdered driver, a black-marketeering American soldier named Tully (played by ), being fished from a river eddy, suspiciously adjacent to the Potsdam conference grounds. The corpse is discovered to be in possession of 50,000 s — which are later revealed to have been printed by the U.S occupying forces.

Geismar becomes entwined in both the mystery of his murdered driver and the clandestine search by both Soviet and American forces for the missing German Emil Brandt (the title character, played by ). He becomes more involved in both mysteries as his investigation intersects with his search for Lena Brandt (played by ), a German Jew — and Emil's wife — with whom Geismar had been in a relationship prior to the war. Lena has survived the by doing "what she had to" to stay alive — early in the film this is assumed to be just , but Lena, in reality, holds a darker secret of complicity and guilt.

In the film, Emil Brandt is a former officer who had been the secretary of Franz Bettmann, Chief Production Engineer of the at concentration camp /. (Bettmann is only a minor character in the film; he appears to be based on the real .) The Soviets, the Americans, and the British all try to get hold of Emil Brandt, for different reasons. The Americans have already detained Bettmann in a and intend to transport him to the U.S. as part of their Operation Overcast/Paperclip to have him work on their own rocket program (cf. ). In the film, they are fully aware of Bettmann's role at Camp Dora and know about the used in the V-2 program, but want to cover up his involvement (because they could not lawfully employ a known ), which includes eliminating Emil Brandt, whose testimony or written notes would prevent their whitewashing of Bettmann.

Geismar, in his attempts to get his former lover, Lena, out of Berlin, gets more and more involved in the search for Emil Brandt. At one point, Lena gives Emil's notes on Camp Dora to Geismar. When Lena and Geismar try to hand Emil Brandt over to the American prosecutor charged with handling war crimes cases, they are intercepted by the American authorities who want to protect Bettmann, and Brandt is murdered. But Geismar still has Brandt's notebooks, which he now trades in to the war crimes investigators of the U.S. Army (who have turned out to be in league with the other American authorities - the ones who want to keep that evidence confidential to whitewash Bettmann) in exchange for a _de. "" (a document) and a visa for Lena, such that she can leave to England or the U.S. (that's not clear in the film).

Through a minor character of a Jewish owner of a who survived the Holocaust with his legs amputated, the film refers to the , in particular to bone transplantation experiments as they were done at the .

The film imitates the appearance of films from . Most of the scenes were shot on s and on ' , and were then edited with archival Russian footage and archived film from . Although the finished film is in black and white, it was shot in color because this allowed the use of faster film than available black-and-white film stocks, and afforded the ability to use 'green screen' techniques. The color was then reduced in post-production through the use of a to a grainier , in order to blend with the carefully restored archival material.Fact|date=June 2007

While one critic greatly appreciated the film, [cite web|url=http://www.rollingstone.com/reviews/movie/9569555/review/12626060/the_good_german|title=Good German|author=Travers, P|publisher=Rolling Stone Magazine|accessdate=2007-08-23] the film received generally poor reviews, with many critics complaining the film was too reliant on style and did not concentrate on the building of characters.