pronunciation (help·info) (Tamil: கன்னியாகுமரி) is a town in the state of Tamil Nadu in India. It is also sometimes referred to as Cape Comorin. Located at the southernmost tip of the Indian Peninsula, it is the geographical end of the Indian mainland. The district in Tamil Nadu where the town is located is called Kanyakumari District. The closest major cities are Nagercoil, the administrative headquarters of Kanyakumari District, (22 km (14 mi)) and Thiruvananthapuram, the capital of Kerala (85 km (53 mi)).

The town is a popular tourist place in India.

Kanyakumari takes its name from the Kumari Amman or Kanyakumari Temple, situated in the town, on the sea-shore, the very confluence of the three water-bodies – the Arabian Sea, the Bay of Bengal[1] and the Indian Ocean. In his work on ancient India, Ptolemy had identified Kanyakumari (Cape Comorin) along with the Gulf of Mannar as a center for pearl fishery. He also identifies Korkai, a place to the east of Kanyakumari as an emporium of pearl trade, also Travancore Census 1931 says that Paravars ruled that Coast and built the temple for their reverence to Sea Goddess.[2]

There are multiple myths revolving around this place: 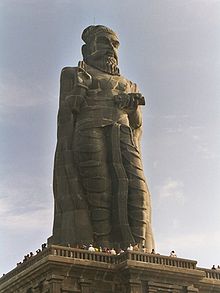 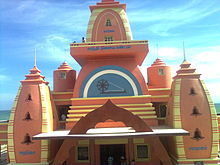 Kanyakumari has been a great centre for art and religion for centuries. It was also an area of great trade and commerce. It was ruled by the Cholas, the Cheras, the Pandyas and the Nayaks. The architectural beauty of the temples in the area are the works of these rulers. Later Kanyakumari became part of the Venad kingdom with its capital at Padmanabhapuram. The king of Venad, Anizham Thirunal Marthanda Varma, established Travancore by extending his domain further north up to Azhva, during his reign from 1729 to 1758. By this, the present Kanyakumari District came to be known as Southern Travancore. In 1741, Maharaja Marthanda Varma defeated the Dutch East India Company at the famous Battle of Colachel.

Kanyakumari was under the rule of the Paravar Kings till the downfall of Pandyas, and later by kings of Travancore under the overall suzerainty of the British until 1947, when India became independent. Travancore joined the independent Indian Union in 1947. The reign of the Travancore royals came to an end.

Under Travancore rule, the town, and the modern administrative district that bears its name, Kanyakumari District, progressed both socially and economically. Still a significant part of population study and speak Malayalam as their mother-tongue. The culture followed by Kanyakumari people is mixed and has more influence from Travancore.

In 1949, Kanyakumari became part of the reconstituted Travancore-Cochin State. Around this time, a popular agitation for the amalgamation of Kanyakumari District with Tamil Nadu by the Tamil-speaking people of the district intensified, under the leadership of Marshal Nesamony

Christianity arrived in South India around AD 52 through St. Thomas, one of the twelve Apostles of Christ. However, European missionaries, who arrived in the 16th century, propagated Christianity in the area. St. Francis Xavier (April 7, 1506 – December 2, 1552) was the pioneer in preaching Christianity in the present day Kanyakumari district. Islam is believed to have entered the southern part of India through Kanyakumari during the early part of the eighth century AD through traders and missionaries who came through sea-routes. Islam, Christianity and Jainism have also contributed to the architectural wealth and literary heritage of the region. 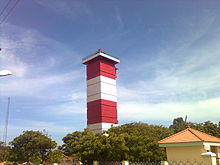 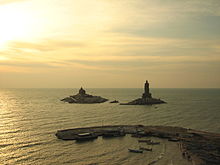 It is suggested that there once existed a continent called Kumari Kandam to the south of Kanyakumari, often compared with Lemuria.

Kanyakumari is the southernmost town of the Indian mainland. The land mass in and around the town are hilly and uneven, with many commercial buildings and hotels at the upper crest of the land mass with the sea visible below. The old areas of the town, where the natives live, are on the lower side. Many of the natives are into fishing activity and other maritime professions.

Tourism is one of the main activities of the town ; and many locals are employed in shell-craft and other tourism-related businesses. 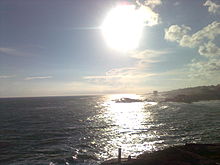 Since the early 1970s, tourism has been an important activity in the town. Because of this it is one of the few small towns in South India where one can see many of the different languages of India spoken in the street.

Of late, the promotion of tourism has increased, with attractions that do not include the town, such as the surrounding landscapes, as well as the historical and religious sites found around the district, being emphasised to a greater degree. Ultimately a total of 1.9 million tourists (domestic and foreign) visited Kanyakumari in 2007.[6]

Though there are several places of tourist-interest in the town and district, Kanyakumari is especially popular in India for its spectacular and unique sunrise and sunset. The confluence of three ocean bodies – the Bay of Bengal, the Indian Ocean, and the Arabian Sea – makes the sunrise and sunset even more special. On balmy, full-moon evenings, (locally called Chitra Pournami) one can also see the moon-rise and sunset at the same time – on both sides of the 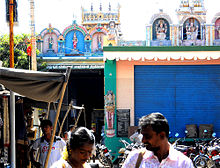 View of the Kanyakumari temple.

View of the sea from Vattakottai Fort, near Kanyakumari town.

The Kumari Amman or the Kanyakumari Temple, located on the shore, is a Shakti Peetha dedicated to a manifestation of Parvati, the virgin goddess who did penance to obtain Lord Shiva's hand in marriage. The temple and the adjoining ghat, situated overlooking the shore, attract tourists from all over the world. The sparkling diamond nose-ring of the deity is said to be visible even from the sea. 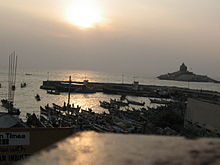 On two rocky islets just off the shore, southeast of the Kumari Amman temple, are the Vivekananda Rock Memorial, built in 1970, and the gigantic 133 feet (41 m) tall statue of Tamil saint-poet Thiruvalluvar (Completed on January 1, 2000 by the legandary Dr. V. Ganapati Sthapati, Chennai) is one of the biggest statues in Asia. One of the rocks called Sri Padhaparai is said to bear the footprints of the virgin goddess. Swami Vivekananda is said to have meditated on this rock for three days. Also on this rock, there is a Dhyana mandapam, an area for meditation. Ferry services are available to reach the memorial.

The Gandhi Memorial has been built on the spot where the urn containing the Mahatma's ashes was kept for public viewing before immersion. Resembling central Indian Hindu temples in form, the memorial was designed in such a way that on Mahatma Gandhi's birthday, 2 October, the first rays of the sun fall on the exact place where his ashes were kept.

The state-owned Poompuhar Shipping Corporation runs ferry services between the town and the Vivekananda Rock Memorial and Thiruvalluvar statue, situated on rocky islets off the coast.

Kanyakumari is directly connected by rail with almost all metropolitan cities in India.

Mathur Aqueduct – one of the largest Aqueducts in Asia 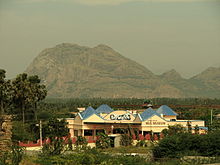 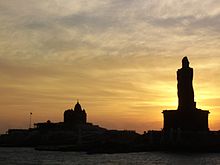 View of the Western Ghats at Keeriparai 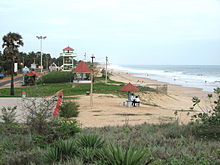 From the shore where the fishing boats are moored you can see the three towering spires of this off-white Gothic structure with a distinct Portuguese feel. The Church of Our Lady of Ransom is a more than 100-year-old building dedicated to Mother Mary. But what catches your eye first-up is the 153-foot-high (46 meters) central tower crowned with a Cross of pure gold. Truly a beautiful structure; the church looks particularly gorgeous against the molten-blue noon sky. Astonishingly, the grand Gothic façade is a striking contrast to its almost bare interiors.

Once you tread in you will be goggled by its hollowness; no pews anywhere in sight, only a beautiful idol of Mother Mary clad in a sari – like in most South Indian churches – and a little Cross on the altar. This emptiness is further accentuated by colorful light patterns thrown by the stained-glass windows on the bare floor. And one is given to wonder that the church is probably no longer functional! On the contrary, in fact, the church holds mass regularly on the floor made of sand. Since the parish here predominantly comprise local fishing folks, mass is always held in the regional language Tamil.