Crantock (Cornish: Lanngorrow) is a coastal civil parish and a village in Cornwall, England, United Kingdom. The village is approximately two miles (3 km) southwest of Newquay.[1]

Large parts of the parish are now in the ownership of the National Trust, including West Pentire headland which is a Site of Special Scientific Interest noted for its wild flowers and rare plants.

The older part of the village is situated around its church which is dedicated to St Carantoc, founder of the village. At one time the village was known as Langurroc which translates as – The Dwelling of Monks. There is a Langurroc Road in the village. Langurroc was infamously (among locals) covered up in a sandstorm and may well lie beneath the sand dunes which back Crantock Beach.

The church was founded in Norman times and was originally cruciform but it was reconstructed in the 14th and 15th centuries: restoration was carried out by E. H. Sedding in 1899–1902. The font is Norman and the rood screen is much restored. The church was collegiate from ca. 1236 to the Reformation.[2]

The local village hall has recently undergone a transformation, with money from the National Lottery, the awarding of which was featured on ITV's Westcountry Live programme. The playing field on which the hall is situated was also given a new lease of life, and now includes a basketball hoop, numerous climbing facilities, and cricket and football pitches.[citation needed]

The village hall is now three times bigger in size and was the centrepiece in 2007's annual "Jazz in the Park". The village also hosts a street fair known as the "Crantock Summer Fiesta" which has a coconut shy, tombola, raffle and many other stalls.[citation needed]

In 2006, the village held its second annual "big bale push" involving locals pushing tightly packed straw cylinders around the roads of the village, which are of course, closed for the event. They now hold the Guinness record for bale pushing.[citation needed] 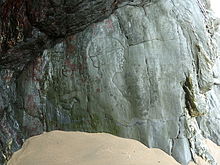 Like several other sandy beaches in the Newquay area, Crantock Beach is popular for surfing. There are car parks at Crantock Beach and West Pentire. The beach is backed by sand dunes.

At the left hand side of the beach, low tide reveals a carving into a rock, featuring a picture of a woman's face, and the inscription ‘Mar not my face but let me be, Secure in this lone cave by the sea, Let the wild waves around me roar, Kissing my lips for evermore’

The story goes... In the early 20th century a woman was horse riding along Crantock Beach. She and her horse got cut off as the tide came in and the rough seas swept them away drowning them both. Her distraught lover carved a poem into a rock, in a cave on the beach, along with a portrait of his lost love and her horse. The carvings are said to be the work of a local man Joseph Prater.

The coastal footpath skirts all along the west side of the parish. Walking from Crantock the path leads to a sandy cove called Porth Joke known locally as Polly Joke. Its name comes from the old Cornish words for 'Jackdaw Cove' ....'Pol-Lejouack'. This cove is entirely surrounded by National Trust land and virtually unchanged over the centuries. Further along the coast path is the village of Holywell, with a larger sandy beach at Holywell Bay.