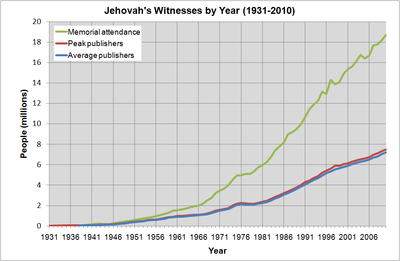 As of August 2010, Jehovah's Witnesses report an average membership of approximately 7.2 million actively involved in preaching, with a peak of 7.5 million.[1][2] Jehovah's Witnesses have an active presence in most countries, though they do not form a large part of the population of any country.[3]

To be counted, an individual must be a publisher, and report some amount of time in the ministry, normally at least an hour per month. Under certain circumstances, such as chronic and debilitating illness, members may report increments of 15 minutes. Jehovah's Witnesses' preaching activity is self-reported, and members are directed to submit a 'Field Service Report' each month. Baptized members who fail to submit a report every month are termed 'irregular'. Those who do not submit a report for six continuous months are termed 'inactive'.[4] In 2010, these reports indicated a total of more than 1.6 billion hours of preaching, resulting in an increase of approximately 300,000 baptized members.[1]

Because Jehovah's Witnesses only count as members those who submit reports for preaching activity, secular estimates of their numbers are typically higher than those indicated in the Witnesses' official membership statistics.[2] For example, in the United States, Jehovah's Witnesses report approximately 1.2 million active publishers in the United States; however, an academic study at Trinity College (Connecticut) based on the American Religious Identification Survey conducted in 2008, reported an estimated 1.914 million adults in the US who self-identify as Jehovah's Witnesses.[5] Their official statistics indicate membership according to territories, some of which are not independent countries. For example, Hawaii is considered separately to the rest of the United States.

The number of people who attend Jehovah's Witnesses' annual commemoration of the Memorial of Christ's death (also termed the Lord's Evening Meal) includes active Witnesses, their children, and others who are invited to attend. According to the 2011 Yearbook of Jehovah's Witnesses, worldwide attendance at the 2010 celebration of the Memorial was 18,706,895, an increase of more than half a million over the prior year.[1] In the United States, 2.5 million people were present. In Zambia 710,000 attended, or 1 person for every 19 in the population. Of those attending worldwide, about 11,000 partook of the memorial emblems of unleavened bread and wine.[1] Those who partake profess to be of the 144,000 "anointed" and hope to go to heaven, based on their interpretation of Revelation 14:1.

Congregations are generally organized geographically, and members are requested to attend the Kingdom Hall to which their neighborhood has been assigned, resulting in an ethnic mix generally representative of local population, though ethnicity-based congregations also exist.[6] In the United States, 37% of adults who self-identify as Jehovah's Witnesses are African Americans. This is the highest proportion among the 22 largest religious identifications in the United States.[7]