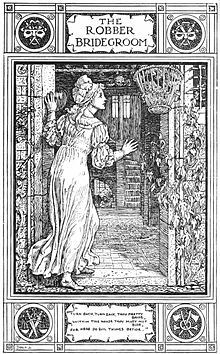 Illustration of "The Robber Bridegroom" from Household Stories by the Brothers Grimm, translated by Lucy Crane, illustrated by Walter Crane, first published by Macmillan and Company in 1886.

The Robber Bridegroom is a German fairy tale collected by the Brothers Grimm, tale number 40.[1] Joseph Jacobs included a variant, Mr Fox in English Fairy Tales,[2] but the original provenance is much older; Shakespeare (circa 1599) alludes to the Mr. Fox variant in Much Ado About Nothing, Act 1, Scene 1:

It is Aarne-Thompson type 955, the robber bridegroom.[3] This type is closely related to tales of type 312, such as Bluebeard, and type 311, such as How the Devil Married Three Sisters and Fitcher's Bird.[4]

A miller wished to marry his daughter off, and so when a rich suitor appeared, he betrothed her to him. One day the suitor complained that the daughter never visited him, told her that he lived in the forest, and overrode her reluctance by telling her he would leave a trail of ashes so she could find his home. She filled her pockets with peas and lentils and marked the trail with them as she followed the ashes.

They led her to a dark and silent house. A bird in a cage called out to warn her that she entered a murderer's house. An old woman in a cellar kitchen told her that the people there would kill and eat her unless the old woman protected her and hid her behind a barrel. A band of robbers arrived with a young woman, and they killed her and prepared to eat her. When one chopped off a finger to get at the golden ring on it, the finger and ring flew through the air and landed in the bodice of the hiding woman. The old woman discouraged them from searching, because neither the finger nor the ring were likely to run away: they'd find it in the morning.

The old woman drugged the robbers' wine. As soon as they fell asleep, the two living women fled. Wind had blown the ashes away, but the peas and lentils had sprung up into seedlings: the two followed the path of plants and reached the young woman's home.

When the wedding day arrived and the guests were telling stories, the young woman said that she would tell a dream she had had, and told of her visit to the robbers' den, her bridegroom punctuating it with "My darling, you only dreamed this." -- or the robber punctuating with exclamations that it was not so in the Mr. Fox variant -- until she produced the finger of the dead girl and showed it to the company.

The robber bridegroom and all his band were put to death.

In Jacobs's version, the woman, Lady Mary, went to the house out of curiosity, Mr Fox having not even suggested that she come, and she was not told of the horrors there, but found the murdered bodies of women, as in Bluebeard.

Pushkin has written a variant of the tale called Жених (The Bridegroom), starting with the woman coming home from the robbers' house.

In an American variant, from the Ozarks, the heroine resolved never to marry and never did, because she had concluded men were bad; she just stayed with her own family, who were happy to have her.[5]

Eudora Welty's first novel The Robber Bridegroom adapts the story to eighteenth-century Natchez, Mississippi. In this version, the Bridegroom is a heroic outlaw whose rival (the historically real Mississippi bandit, Little Harp) is the bloodthirsty villain. This Bridegroom eventually kills Harp and marries the girl, Rosamond. Welty's version became the basis for broadway musical of the same name.

Neil Gaiman wrote a short story entitled The White Road, based on "Mr Fox." In this short story, published in Gaiman's 1998 book Smoke and Mirrors, a recent love interest of Mr Fox's has followed him home. She finds evidence of murder in his home and, later, witnesses the grisly killing of another victim. She reveals his true nature to a crowd at a local Inn, via a "story of a dream." She ultimately shouts that he is "Bluebeard" and "Gilles de Rais." However unlike the original "Mr Fox," in Gaiman's version Mr Fox is actually innocent, and the woman kills him with her story.

Margaret Atwood's novel, The Robber Bride changes the sex of the villain to a predatory woman, Zenia, who metaphorically devours men after seducing them away from their partners. The tale is told through the eyes of the men's wives/partners, women whom Zenia befriends and then betrays. Other allusions to fairy tales and folklore are present throughout the book.

The Robber Bridegroom was adapted for the sixth issue of the comic series Grimm Fairy Tales. The story is retold as two sisters who are being courted by a mysterious count. When he chooses the younger of the two, the older sister murders her and becomes the Count's bride. However, it turns out that the Count is really a carnivorous ghoul, and he and the people of his castle devour the girl. This is a story-within-a story, being told to two bickering teenage sisters who are fighting over a boyfriend.