Amateur television (ATV) is the transmission of Broadcast quality video and audio over the wide range of frequencies of (radio waves) allocated for Radio amateur (Ham) use.[1] ATV is used for non-commercial experimentation, pleasure and public service events. Ham TV stations were on the air in many cities before commercial television stations came on the air.[2]Various transmission standards are used, these include the broadcast transmission standards of NTSC in North America and Japan, and PAL or SECAM elsewhere, utilising the full refresh rates of those standards. ATV includes the study of building of such transmitters and receivers, and the study of radio propagation of signals travelling between transmitting and receiving stations.[3]

ATV is an extension of amateur radio. It is also called HAM TV or Fast Scan TV (FSTV) (as opposed to slow-scan television (SSTV), which can be transmitted on shortwave ham bands due to its narrowband structure, but is not decodable by a commercially available television receiver).[4] 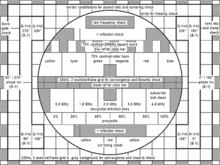 What signal circuit performance checks are made when using a typical test card.

In North America, amateur radio bands that are suitable for a television signal (wide enough to fit such a signal) are higher in frequency than VHF broadcast TV. The lowest frequency ham band suitable for television transmission is 70 centimeters, which is between broadcast channels 13 and 14. While outside of broadcast television channels, this frequency falls into CATV frequencies, on channels 57 to 61 (420-450 MHz).[5] As such, ATV transmissions can be viewed by setting a television to cable input and attaching an outdoor 70 cm antenna. For more sensitive reception, some users may use a purposely-built ATV down-converter, which is a kind of set-top-box. Other bands are also used for ATV, most of them in the UHF region on frequencies higher than UHF broadcast TV. 33 centimeters and 23 centimeters are two other commonly used bands for ATV, but reception of these higher bands requires the use of a down-converter.

Most ATV signals are transmitted in either Amplitude modulation (AM) or vestigial sideband (VSB) NTSC (North American analog TV broadcast modulation standard). AM and VSB signals are inherently compatible with each other, and most televisions can receive either. AM signals are wider than VSB signals, but VSB transmitters are more difficult and expensive to construct. For practical reasons, most individual ATV users transmit in AM, and VSB is transmitted by repeater stations. On the 33 cm and higher bands, Frequency modulation (FM) ATV may be used, and on the SHF and EHF ham bands, FM is more commonly used than VSB or AM. FM ATV is incompatible with AM/VSB ATV, and a separate demodulator is necessary to receive signals.

The 70 centimeters ham band is the most used band for ATV. Signals transmitted on this band usually propagate longer distances than on high frequency bands, for a given transmitter power and antenna gain.

The 70 cm band channels (with carrier frequency for video and audio) are:

All of these fall within the range between T.V. broadcast channels 13 and 14, which are:

The 33 centimeters ham band is next lowest frequency band available for ATV in North America. This ham band is unique to ITU Region 2, and it is rarely available for amateur use in ITU Regions 1 or 3. This band is also shared with many users, including ISM devices and Part 15 users, so interference issues are more likely than on other bands. This is also the lowest frequency band on which FM ATV occurs. This band does fall within the CATV channel scheme; however, most current consumer equipment does not tune to channels above 125.

The 33 cm AM/VSB channels (with carrier frequency for video and audio) are:

The 23 centimeters ham band is the third lowest frequency band available for ATV. Due to the wider nature of this band over the lower ones, and the expense of VSB-filters, VSB is rarely used. Most ATV is either in AM or FM. Old TVRO receivers may be used to watch FM ATV when an antenna is connected to the LNB input. The IF of these receivers overlaps this ham band.

The 23 cm AM/VSB channels (with carrier frequency for video and audio) are:

In addition to the above, there are other ham bands which are less commonly used for ATV:

The distance record for ATV is between Hawaii and California on 434 MHz.http://www.hamtv.com/atvdxrecord.html

Experiments with digital modes have lagged somewhat behind those in Europe, but have taken on some new urgency given the transition of broadcast television. WR8ATV currently has an output using DVB-S, which is believed to be the first, and currently only, D-ATV repeater in the US.[8]

In Europe, which generally has a narrower UHF allocation than the USA, the majority of amateur television operation is currently frequency modulated on 1.2 GHz and above. The frequencies in use depend on national permissions. In most of mainland Europe, the most common frequency is 1255MHz. Other bands commonly used for ATV are the 13cm (~2.3 - 2.45 GHz) and 3cm (~10 GHz) bands, although ATV is used on most of the microwave bands.

In several countries cross-band repeaters are used, with AM inputs on 430 MHz and FM outputs on 1255 MHz, others have FM-ATV inputs on 13 cm and outputs on 3 cm.

In the United Kingdom, much activity occurs using in-band repeaters. These generally have an input of 1248, 1249 or 1255 MHz and typically output at 1308, 1312 or 1316 MHz, although other frequencies are also used. Simplex operation occurs on these or other frequencies chosen to avoid interference with other users of the band, e.g. 1285 MHz. Recent experiments have been done with digital modes following widely-adopted DVB-S and DVB-T standards. 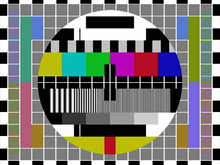 Typically frequency modulated TV is used on frequencies above 1240 MHz (1.24 GHz), where there is enough bandwidth for such wideband transmissions. This is often used as a repeater's input frequency, with output being standard VSB on the four channels listed above.

The quality of transmission is expressed as a "p-level"; "p" standing for "picture". P-levels range from zero to five, increasing as the picture becomes more viewable. P-0 signifies a state in which sync bars are visible, but the picture is too snowy to be seen; this occurs at a minimum signal strength of 3db. Each level represents an increase of 6db over the previous; P-5 is 30db above P-0 and represents a perfectly clear picture.[9]

As transmission frequency increases, atmospheric path losses become greater, particularly at frequencies above 10 GHz. Additionally, long-distance propagation by F-layer ionospheric skip over the horizon does not typically occur at higher frequencies, and terrain and man-made structures can affect propagation of signals, blocking or redirecting signals. Factors such as E-layer skip propagation, tropospheric enhancement, and knife-edge diffraction can extend the useful range of signals.[10] 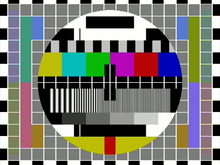