Caldicot (Welsh: Cil-y-coed) is a small town in Monmouthshire, southeast Wales, located between Chepstow and Newport, just off the busy M4 / M48 motorway corridor. The site adjoins the Caldicot Levels, on the north side of the Severn estuary. Caldicot has easy access by motorway and rail to Cardiff, and across the Second Severn Crossing, old Severn Bridge and railway tunnel to Bristol. The population of the town is now around 11,000. It has a large school, Caldicot Comprehensive School, and is known for its medieval castle.

There was considerable activity in the area during the Bronze Age. Excavations near the Nedern Brook beside the castle revealed a plank from a boat and complex wooden structures in the former river bed. The boat probably traded across the Severn with the farmers and traders of Somerset. Later, in Roman times, it is likely that trading vessels sailed up the Nedern Brook to Caerwent. The discovery of kilns also shows that coarse pottery was produced in the village during Roman times.[1]

In 1074, following the Norman Conquest, the manor of Caldicot was given to Durand, the Sheriff of Gloucester. Caldicot is recorded in the Domesday Book in 1086. Its entry reads, 'Durand the Sheriff holds of the King, one land, in Caerwent, called Caldicot. He has in demesne there 3 ploughs, and 15 half villeins, and 4 bondmen, and one knight. All these have twelve ploughs. There is a mill worth ten shillings.'

The name 'Caldicot' is usually stated to derive from the Old English phrase calde cot meaning 'cold hut'. A cold hut is an exposed shelter used by either humans or animals. The modern Welsh name, Cil-y-coed, means "corner of the wood", referring to Wentwood, and is also considered by some sources to be the origin of the English name. However, this is disputed.[2]

In 1158 the manor of Caldicot passed to Humphrey II de Bohun, who was responsible for building the stone keep and curtain walls of the present-day castle. In 1376 it passed to Thomas Woodstock, third son of King Edward III, when he married Alianore de Bohun. It began to fall into ruins around the 16th century.

The parish church of St. Mary was founded in the Norman period, but is mainly built in the Perpendicular style of the late 14th and 15th centuries.

By the mid-19th century, Caldicot was a small farming village. However, the opening of the South Wales Railway brought London and Cardiff within relatively easy reach (although Caldicot station itself was not opened until 1936). The railway attracted industry, and 1862 Henry Hughes of Tintern opened a wireworks next to the railway, becoming the village's major employer and attracting many new workers. In 1880 it became a tinplate works for the canning industry. In 1879 work began on the Severn Tunnel, which was opened in 1886. Its construction brought hundreds of workers to Caldicot, roughly doubling its population.[1]

Court House was the home of baker Henry Jones, the inventor of self-raising flour, from 1864 until his death in 1891. He is buried in the churchyard.[4]

During the first half of the 20th century, Caldicot continued to grow steadily, but unspectacularly, reaching a population of 1,770 in 1951. Early in the 1950s, however, Chepstow Rural District Council decided that the village should be allowed to expand to approximately 3,000. Shortly after this decision, the government decided to build a new steelworks at Llanwern. Caldicot was designated as a suitable home for the thousands of steelworkers, and expansion plans were revised upwards. Llanwern steelworks opened in 1962, and by the end of the decade Caldicot was occupied by over 7,000 people.[1]

The growth of the community was furthered by the opening of the Severn Bridge in 1966. With Caldicot now being part of the "M4 corridor" new industries such as Mitel Telecom came to the town, compensating for the contraction of the steel industry and the railways.[1] 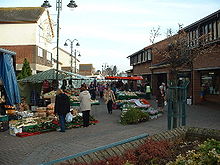 The pedestrianised town centre of Caldicot on market day

Caldicot is the location of Caldicot Castle and lake. The area has popular waymarked footpaths along the Caldicot Level and the coastal path can be walked. Nearby are Caerwent and Wentwood. To the north-west, Dewstow House dates from c.1804. Extensive gardens and grottoes built after 1895 have been undergoing restoration since 2000 and are now open to the public.

Caldicot is the nearest town to the Welsh side opening of the Severn (Railway) Tunnel -- although not the nearest incorporated area, as the Tunnel actually opens just outside Rogiet (pronounced 'Rogg-ett'), an ancient village which was developed in modern times largely to service the railway.

Caldicot is twinned with Waghäusel, Germany and Morières-lès-Avignon France.