Anna and the King

Anna and the King 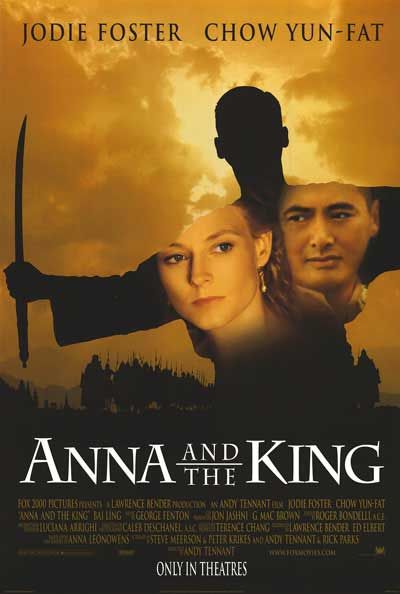 The film was directed by and stars and . It was an Academy Award nominee in 2000 for Best Art Direction and Best Costume Design.

The film begins by following the story of and Rama IV as it is usually told; Anna is a widow who has come to Siam with her son Louis to teach English to the royal children. She is a strong-willed, intelligent woman and this pleases the King, who wants to modernize his country to keep it safe from the threat of colonialism, while protecting many of the ancient traditions that give Siam its unique identity.

Anna is enchanted by the royal children, particularly Princess Fa-ying (). The little girl identifies with the spirit of the playful monkeys who live in the trees of the royal garden. When she suddenly takes ill of cholera, Anna is summoned to her chambers to say goodbye. She gets there just as Fa-ying dies in Mongkut's hands, and the two mourn together. Sometime later, when the King finds that one of the monkeys has "borrowed" his glasses, as his daughter used to do, he is comforted by his belief in and the idea that Fa-ying may be reborn as one of her beloved animals.

Lady Tuptim (), the King's new favorite concubine, was already engaged when brought to the court. The King is kind to her, but she's too unhappy and at last runs away, disguising herself as a young man and joining the monastery where her former fiancé, Khun Phra Balat, lives. She is tracked down and brought back to the palace, imprisoned, and initially caned along with her Balat. Although the King intended to mitigate the severity of the final charges, Anna, in front of the entire court, insists that the King be merciful, severely limiting the King's ability to sanction a lesser punishment out of political and cultural concern that it would appear as though he had been lenient because of Anna's insistence; Tuptim and Balat are beheaded in front of the entire court, despite the well held belief that the sentence is monstrously unfair.

The political aspects of the story are completely fictional: Siam is under siege from what appears to be a British-funded against King Mongkut, using Burmese soldiers. Mongkut sends out his brother Prince Chaofa and his military advisor General Alak to investigate.

However, it turns out that Alak is the man behind the coup and he turns on and kills Chaofa. He then flees Siam into Burma where he summons and readies his troops to invade Siam and kill the King and his children.

With Anna's help, the king manages to hide his children and his wives in a safe place. Then he goes with the few soldiers he has to face Alak. Siamese soldiers place high explosives on a wooden bridge high above a canyon floor, as Alak and his army approaches. The King orders his "army" to stay back and rides to the bridge alone. Alak takes two soldiers to confront the King.

Anna and Louis then orchestrate a brilliant deception from their hiding spot in the forest: Louis uses his horn to replicate the sound of a bugle charge, as Anna "attacks" the area with harmless fireworks. The ploy works as the Burmese, believing the King has brought British soldiers, retreat in a panic. Alak attempts to recall them, screaming "it's a trick", but his efforts prove to be futile. Alak stands alone, but the King refuses to kill him, saying that Alak should have to live with his shame. As the King turns to ride back to Siam, Alak picks up a gun and aims at the King, but the explosives are detonated, blowing the bridge to pieces, and Alak along with it. It shows that at the end of the movie, the King had one last dance with Anna, the love of his life, before she would go back to England with Louie. The King's son takes over, and abolishes slavery.

The Thai government did not allow the film makers to film in Thailand. After completion of the film, the Thai authorities did not permit the film to be distributed in Thailand due to scenes that could be construed as disrespectful towards the King. The film makers resubmitted the movie to Thai censors. [http://findarticles.com/p/articles/mi_m0WDP/is_1999_Dec_20/ai_58532882] The Thai authorities maintained the ban; "The Nation"'s opinion piece reported that some Thai questioned the state of the democracy due to the film ban; the paper also reported that Americans enjoyed watching the film. [http://www.nationmultimedia.com/search/read.php?newsid=429&keyword=Anna+The+King] [http://www.nationmultimedia.com/search/read.php?newsid=494&keyword=Anna+The+King]