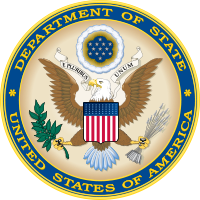 Seal of the US Department of State

Created in 1924 by the Rogers Act, the Foreign Service combined all consular and diplomatic services of the U.S. government into one administrative unit. In addition to the unit's function, the Rogers Act defined a personnel system under which the United States Secretary of State is authorized to assign diplomats abroad.

Members of the Foreign Service are selected through a series of written and oral examinations. They serve at any of the 265 United States diplomatic missions around the world, including embassies, consulates, and other facilities. Members of the Foreign Service also staff the headquarters of the four foreign affairs agencies: The Department of State, headquartered at Harry S Truman Building in the Foggy Bottom neighborhood of Washington, D.C.; the Department of Agriculture; the Department of Commerce; and the United States Agency for International Development.

On September 15, 1789, the 1st United States Congress passed an Act creating the Department of State and appointing duties to it, including the keeping of the Great Seal of the United States. Initially there were two services devoted to diplomatic and consular activity. The Diplomatic Service provided ambassadors and ministers to staff embassies overseas, while the Consular Service provided consuls to assist United States sailors and promote international trade and commerce.

Throughout the 19th century, ambassadors, or ministers, as they were known prior to the 1890s, and consuls were appointed by the president, and until 1856, earned no salary. Many had commercial ties to the countries in which they would serve, and were expected to earn a living through private business or by collecting fees. In 1856, Congress provided a salary for consuls serving at certain posts; those who received a salary could not engage in private business, but could continue to collect fees for services performed.

The 1946 Act replaced the Board of Foreign Service Personnel, a body concerned solely with administering the system of promotions, with the Board of the Foreign Service, which was responsible more broadly for the personnel system as a whole, and created the position of Director-General of the Foreign Service. It also introduced the "up-or-out" system under which failure to gain promotion to higher rank within a specified time in class would lead to mandatory retirement, essentially borrowing the concept from the U.S. Navy. The 1946 Act also created the rank of Career Minister, accorded to the most senior officers of the service, and established mandatory retirement ages.[4]

The new personnel management approach was not wholly successful, which led to an effort in the late 1970s to overhaul the 1946 Act. During drafting of this Act, Congress chose to move the commercial attachés back to Commerce while preserving their status as Foreign Service Officers, and to include agricultural attachés of the Department of Agriculture in addition to the existing FSOs of the Department of State, U.S. Information Agency, and U.S. Agency for International Development.

Members of the Foreign Service

While employees of the Department of State make up the largest portion of the Foreign Service, the Foreign Service Act of 1980 authorizes other U.S. government agencies to use the personnel system for positions that require service abroad. These include the Department of Commerce [7] (Foreign Commercial Service), the Department of Agriculture (specifically the Foreign Agricultural Service, though the Secretary of Agriculture has also authorized the Animal and Plant Health Inspection Service to use it as well), and the United States Agency for International Development (USAID).[8] USAID, Commerce, and Agriculture senior career FSOs can be appointed to ambassadorships, although the ranks of career ambassadors are in the vast majority of cases drawn from the Department of State, with a far smaller sub-set drawn from the ranks of USAID Mission Directors.

Generalist candidates take the Foreign Service Officer Test (FSOT), a written exam consisting of three sections (job knowledge, biographical information, English grammar and usage) and an essay. Those who pass the FSOT are invited to submit short essays called Personal Narrative Questions (PNQs) for review by the Qualifications Evaluation Panel (QEP). Approximately 25 to 30 percent of candidates pass both the FSOT and the PNQ/QEP phase of the process.[10][11]. [10] After the screening process, less than 10% of those that pass the FSOT are invited to an oral assessment, administered in person in Washington, D.C. and other major cities throughout the United States. Approximately 3% of the original applicants at the written exam will ultimately pass the oral assessment.

Since the 1950s, Foreign Service Officer applicants who passed a full-day written exam were invited to an oral assessment. In mid-2007, the full-day written exam was shortened and the PNQs were added. The PNQs, along with the Qualifications Evaluation Panel (QEP) (which is composed of three current Foreign Service Officers), was one of the most significant changes to the Foreign Service hiring process in decades. To be invited to take the Oral Assessment an applicant must not only pass the FSOT but also the QEP review. The Department of State's Board of Examiners can find some candidacies unacceptable despite the fact that they passed the FSOT.

Those candidates who receive official offers of employment must attend a 6-week training/orientation course known as A-100 at the Foreign Service Institute (FSI) in Arlington, VA.

Foreign Service Specialist (FSS) candidates are evaluated by Subject Matter Experts for proven skills and recommended to the Board of Examiners for an oral assessment based on those skills. FSS positions are currently grouped into seven major categories: Administration, Construction Engineering, Information Technology, International Information and English Language Programs, Medical and Health, Office Management, and Security.[12]

Even when a candidate passes all of the required examinations, several other conditions of employment must be met. Foreign Service candidates undergo a security background check for a TOP SECRET Security Clearance and must obtain a Class 1 (Worldwide Available) Medical Clearance. Failure to obtain a TS clearance or a Class 1 medical clearance can result in a candidate's eligibility being terminated. It can be difficult for a candidate to receive a TOP SECRET clearance if they have extensive foreign travel, dual citizenship, non-United States citizen family members, foreign spouses, drug use, financial problems or a poor record of financial practices, frequent gambling, and allegiance or de facto allegiance to a foreign state. Additionally, it can be difficult for anyone who has had a significant health problem to receive a Class 1 Medical Clearance.

Once an applicant passes the security and medical clearances, as well as the Final Review Panel, they are placed on the register of eligible hires, ranked according to the score that they received in the oral assessment. There are factors that can increase a candidate's score, such as foreign language proficiency, Veteran's Preference, and Peace Corps service. Once a candidate is put on the register, they can remain for 18 months. If they are not hired from the register within 18 months, their candidacy is terminated. Separate registers are maintained for each of the five Generalist career cones as well as the 23 Specialist career tracks.

All Foreign Service personnel must be worldwide available-that is, they may be deployed anywhere in the world based on the needs of the service. They also agree to publicly support the policies of the United States Government.

Members of the Foreign Service are expected to serve most of their career abroad, working at embassies and consulates around the world. By internal regulation the maximum stretch of domestic assignments should last no more than five years before resigning or taking a foreign posting. By law Foreign Service personnel must go abroad after eight years of domestic service. The difficulties and the benefits associated with working abroad are many, especially in relation to family life.

Dependent family members usually accompany Foreign Service employees overseas.[14] The children of Foreign Service members, sometimes called Foreign Service Brats, grow up in a unique world, one that separates them, willingly or unwillingly, from their counterparts living continuously in the states.

Some of the downsides of Foreign Service work include exposure to tropical diseases and the assignment to countries with inadequate health care systems, unaccompanied tours of duty, and potential exposure to violence, civil unrest and warfare.

Attacks on US embassies around the world—Beirut, Islamabad, Belgrade, Nairobi, Dar es Salaam, and Baghdad, among others—underscore the considerable danger these public servants face. FSOs stationed in nations with inadequate infrastructure risk injury or death due to natural disasters that would be relatively minor in the U.S.; for instance, an FSO was one of the first identified victims of the 2010 Haiti earthquake.[15]

For members of the Foreign Service, a personal life outside of the U.S. Foreign Service can be exceptionally difficult, especially when it comes to friends or relations that qualify as Foreign Contacts.[16] Personal relationships with foreign nationals in countries that are considered high-level Human Intelligence threat posts are even more rigorously enforced by Diplomatic Security.[16] In addition to espionage, there is also the danger of personnel that use their position illegally for financial gain. The most frequent kind of illegal abuse of an official position concerns Consular Officers. There have been a handful of cases of FSOs on Consular Assignments selling visas for a price.[17]

Members of the Foreign Service must agree to worldwide availability. In practice, they generally have significant input as to where they will work, although issues such as rank, language ability, and previous assignments will affect one's possible onward assignments. All assignments are based on the needs of the Service, and historically it has occasionally been necessary for the Department to make directed assignments to a particular post in order to fulfill the Government's diplomatic requirements. This is not the norm, however, as many Foreign Service employees have volunteered to serve even at extreme hardship posts, including, most recently, Iraq and Afghanistan.[18]

The State Department maintains a Family Liaison Office to assist diplomats, including members of the Foreign Service and their families, in dealing with the unique issues of life as a U.S. diplomat, including the extended family separations that are usually required when an employee is sent to a danger post.[19]

The Foreign Service personnel system is part of the Excepted Service and both generalist and specialist positions are competitively promoted through comparison of performance in annual sessions of Selection Boards.[20] Each foreign affairs agency establishes time-in-class (TIC) and time-in-service (TIS) rules for certain categories of personnel in accordance with the provisions of the Foreign Service Act. This may include a maximum of 27 years of commissioned service if a member is not promoted into the Senior Foreign Service, and a maximum of 15 years of service in any single grade prior to promotion into the Senior Foreign Service. Furthermore, Selection Boards may recommend members not only for promotions, but for selection out of the service due to failure to perform at the standard set by those members' peers in the same grade. The TIC rules do not apply to office management specialists, medical specialists, and several other categories but most members of the Foreign Service are subject to an "up or out" system similar to that of military officers.[21]

This system stimulates members to perform well, and to accept difficult and hazardous assignments.[22]