Mt. Hebron High School is located in suburban Howard County, approximately 10 miles west of Baltimore. It is on Route 99, Old Frederick Road, just west of U.S. 29 and north of I-70.

Mt. Hebron boys' soccer team was ranked #20 in the nation in 2000.[citation needed] A former soccer coach at the school was Frederick Brocklander, following his retirement as a National League umpire. In 2006, the boys' varsity soccer team won the county championship, 2A/3A regional championship, and the 3A state championship. They ended the season with an undefeated 17-0-4 record, the best in school history.

Mt. Hebron had the #1 girls' varsity lacrosse team in the country for five of the past six years. The team won 15 of 16 possible state championships from 1991-2007 and won every possible Howard County championship since the sport's inception. They also hold the national record for consecutive wins, 107.[citation needed]

In 2008, Mt. Hebron's marching unit became the two millionth performers to march across Disneyland's Magic Kingdom. Also that year, the girls' varsity basketball team won the state championship with an undefeated record of 28-0.

In 2009, the Lancer Drill/dance team won the county-level competition. They became the Division 1 Maryland state champions in the high kick division at the MAPDA competition in 2009 as well. The dance team has also received first place in the National Music Festival competition with superior ratings every year since 2005. 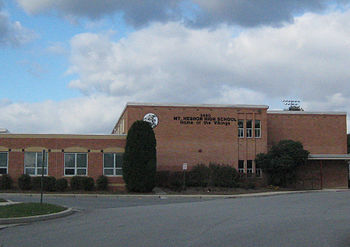