Layers of a PIN diode

A PIN diode operates under what is known as high-level injection. In other words, the intrinsic "i" region is flooded with charge carriers from the "p" and "n" regions. Its function can be likened to filling up a water bucket with a hole on the side. Once the water reaches the hole's level it will begin to pour out. Similarly, the diode will conduct current once the flooded electrons and holes reach an equilibrium point, where the number of electrons is equal to the number of holes in the intrinsic region. When the diode is forward biased, the injected carrier concentration is typically several orders of magnitude higher than the intrinsic level carrier concentration. Due to this high level injection, which in turn is due to the depletion process, the electric field extends deeply (almost the entire length) into the region. This electric field helps in speeding up of the transport of charge carriers from P to N region, which results in faster operation of the diode, making it a suitable device for high frequency operations.

The wide intrinsic region also means the diode will have a low capacitance when reverse biased.

In a PIN diode, the depletion region exists almost completely within the intrinsic region. This depletion region is much larger than in a PN diode, and almost constant-size, independent of the reverse bias applied to the diode. This increases the volume where electron-hole pairs can be generated by an incident photon. Some photodetector devices, such as PIN photodiodes and phototransistors (in which the base-collector junction is a PIN diode), use a PIN junction in their construction.

The diode design has some design tradeoffs. Increasing the dimensions of the intrinsic region (and its stored charge) allows the diode to look like a resistor at lower frequencies. It adversely affects the time needed to turn off the diode and its shunt capacitance. PIN diodes will be tailored for a particular use.

PIN diodes are useful as RF switches, attenuators, and photodetectors. 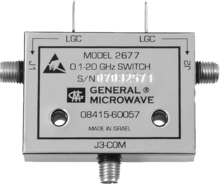 Under zero or reverse bias, a PIN diode has a low capacitance. The low capacitance will not pass much of an RF signal. Under a forward bias of 1 mA, a typical PIN diode will have an RF resistance of about 1 ohm, making it a good RF conductor. Consequently, the PIN diode makes a good RF switch.

Although RF relays can be used as switches, they switch very slowly (on the order of 10 milliseconds). A PIN diode switch can switch much more quickly (e.g., 1 microsecond).

The capacitance of an off discrete PIN diode might be 1 pF. At 320 MHz, the reactance of 1 pF is about 500 ohms. In a 50 ohm system, the off state attenuation would be about 20 dB -- which may not be enough attenuation. In applications that need higher isolation, switches are cascaded to improve the isolation. Cascading three of the above switches would give 60 dB of attenuation.

PIN diode switches are used not only for signal selection, but they are also used for component selection. For example, some low phase noise oscillators use PIN diodes to range switch inductors.[2] 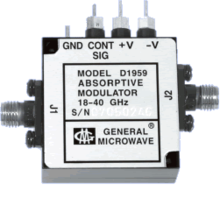 By changing the bias current through a PIN diode, it's possible to quickly change the RF resistance.

At high frequencies, the PIN diode appears as a resistor whose resistance is an inverse function of its forward current. Consequently, PIN diode can be used in some variable attenuator designs as amplitude modulators or output leveling circuits.

PIN diodes might be used, for example, as the bridge and shunt resistors in a bridged-T attenuator.

PIN diodes are sometimes used as input protection devices for high frequency test probes. If the input signal is within range, the PIN diode has little impact as a small capacitance. If the signal is large, then the PIN diode starts to conduct and becomes a resistor that shunts most of the signal to ground.

The PIN photodiode was invented by Jun-ichi Nishizawa and his colleagues in 1950.

PIN photodiodes are used in fibre optic network cards and switches. As a photodetector, the PIN diode is reverse biased. Under reverse bias, the diode ordinarily does not conduct (save a small dark current or Is leakage). A photon entering the intrinsic region frees a carrier. The reverse bias field sweeps the carrier out of the region and creates a current. Some detectors can use avalanche multiplication.

The PIN photovoltaic cell works in the same mechanism. In this case, the advantage of using a PIN structure over conventional semiconductor junction is the better long wavelength response of the former. In case of long wavelength irradiation, photons penetrate deep into the cell. But only those electron-hole pairs generated in and near the depletion region contribute to current generation. The depletion region of a PIN structure extends across the intrinsic region, deep into the device. This wider depletion width enables electron-hole pair generation deep within the device. This increases the quantum efficiency of the cell.

SFH203 or BPW43 are cheap general purpose PIN diodes in 5 mm clear plastic case with bandwidth over 100 MHz. They are used in RONJA telecommunication systems and other circuitry applications.